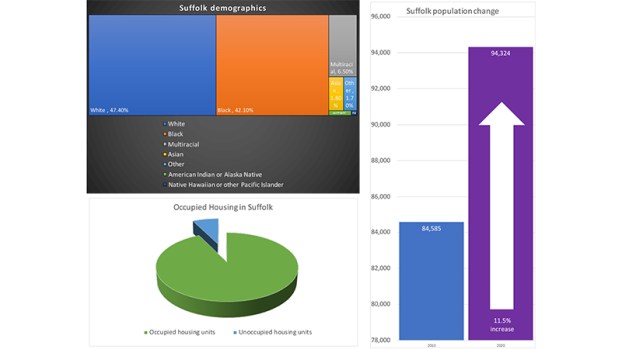 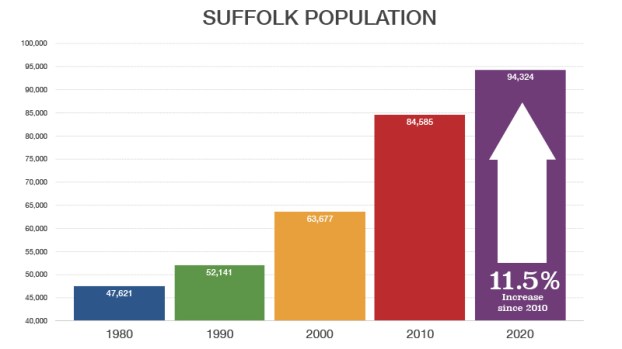 Suffolk’s population has grown by more than 11% over the past decade, U.S. Census Bureau data released Thursday show.

Only Chesapeake grew by a higher percentage of people in South Hampton Roads than did Suffolk, as Southampton County, Surry County and Franklin all saw population declines ranging from three to seven percent.

Mayor Mike Duman said the increase in the city’s population was about the amount he thought it would be.

Duman said the city is required to have three majority-minority districts, and in the last redistricting in 2011, they were split into roughly 12,000-person districts for each of the seven city boroughs, with a 5% leeway allowed. He expects that same process to happen, except with roughly 13,475 people per district, give or take that 5%, also taking into account factors such as natural boundaries and not dividing neighborhoods.

The city has an outside consultant that will give it some options, though the timetable is unclear since there was a delay in releasing U.S. Census Bureau data that caused this year’s elections to take place with current boundaries, rather than redrawn ones.

“We will have a consultant come back with recommendations,” Duman said. “And of course, we’ll have plenty of public input, and there should be some options that are presented to us for consideration.”

In March, that consultant, McGuireWoods of Richmond, told City Council the city should receive the data within 30 days of release and then the law firm’s representatives would move quickly to propose new boundaries for the city’s seven boroughs based on the data.

At that time, George Martin with McGuireWoods told council the firm would have to come back and meet with council once it knew what would happen with the Census data release and discuss the strategy going forward.

The basic legal requirements for redistricting, according to the firm, include the following:

After DLS adjusts the data, each locality has to do its own analysis and redistrict according to that data, and then localities must pass an ordinance to adopt its redistricting plan.

In March, Robert Lawson with McGuireWoods told council that under normal circumstances, it would take about two months for it to provide the council with something it could adopt, with a closed session to discuss legal issues, if any, in the middle of the process.

Lawson, at the time, did not go into too much detail on how many maps it could provide because it could touch on possible litigation issues, but said it would depend on the data and how, and if, the population had shifted.

The city’s Electoral Board briefly discussed redistricting at its Aug. 3 meeting, according to minutes of the meeting. Beverly Outlaw said having contiguous neighborhoods was important to her, while Chairwoman Erin Rice said the Virginia Redistricting Commission planned to eliminate split precincts.