Group calls for civilian review board 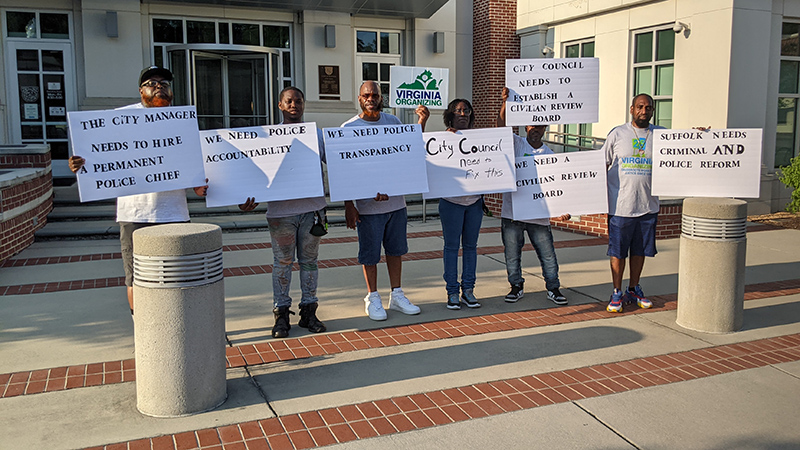 Members of Virginia Organizing’s Suffolk chapter rallied outside City Hall Aug. 13 to renew their call for City Council to institute a civilian review board for the police department. The topic is on the agenda for council’s upcoming retreat Sept. 9 and Sept. 10.

A small group from Virginia Organizing’s Suffolk chapter gathered outside City Hall last week to renew their call for City Council to institute a civilian review board for the police department.

Six members held signs during a short rally Aug. 13 calling for a board to be formed, and they also called for a permanent police chief. Suffolk Police has had an interim police chief for well over a year, when Al Chandler was appointed to the position to replace Thomas Bennett in June 2020.

Tiffany Watts, one of the six from the local Virginia Organizing chapter at the rally, said they are looking for support to establish a civilian review board. She wants police officers to be more active in the community.

“I do know that it could be needed, but it’s at what measure, and I think that everybody has to be accountable for their actions, not only the police officers but us as citizens. We have to do what we are supposed to do — for example, make sure you’re going to work every day, making sure you are following the rules and laws that are set in each city, and then as long as you’re doing that, then if you’re being harassed, or you’re feeling like that you just can’t win, then yes. It has to be a two-way street.”

Imhotep Muhammad, who spoke before City Council at its June 16 meeting about the same topic, said it was past time for council to establish a board.

“In the wake of the George Floyd shooting, and all the other shootings of unarmed African American shootings in America, there’s a need for more transparency,” Muhammad said. “It seems that some police officers — not all but some — are disregarding human rights at all levels.”

Muhammad wants to see Suffolk Police adopt other measures to de-escalate situations without using firearms, and he wants individual officers to be held more accountable when police wrongdoing takes place.

He said he has not had a negative experience with Suffolk Police, but noted that in a recent traffic stop in Portsmouth, he put both of his hands outside the car “because I really do fear for my life.”

Tony Banks, an organizer with the Suffolk Virginia Organizing chapter, said he wants council to understand the seriousness of getting a civilian review board established and having a permanent police chief.

“Then you can have some order and … bring back some public trust,” Jones said. “Because when you get the civilian review board, you’ve got police transparency (and) you’ve got police accountability. If you’ve got that, then the whole community is satisfied.”

“It is in our retreat to discuss,” Duman said. “And we are going to create something, but it doesn’t happen overnight. We are most definitely working on a citizen advisory board or something of that nature. Whatever we do, we’re going to do it the right way.”