A special homecoming for Father’s Day 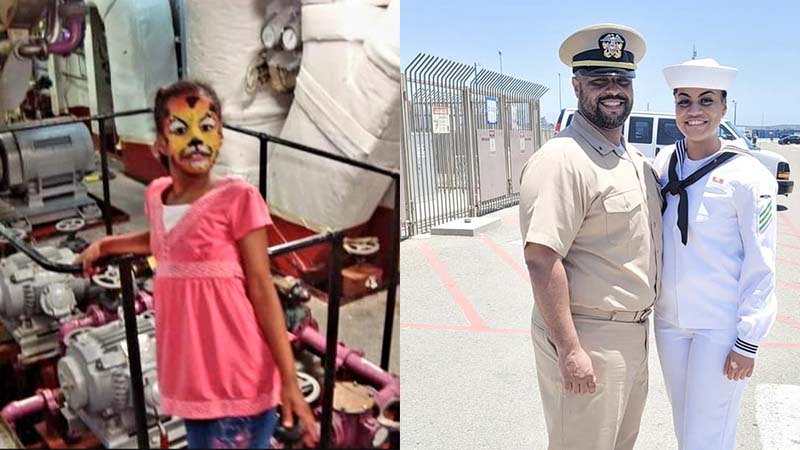 Above left, Ayshia Allen as an 8-year-old at family day aboard the USS Theodore Roosevelt. Above right, Allen and her father, Eric Allen, at her homecoming.

Parents Eric and Ellasin Allen recently returned home to Suffolk after making a memorable trip to California. Their daughter, Ayshia Allen, would be returning after six months as a crew member aboard USS Theodore Roosevelt. Her parents made early arrangements to be on the pier when her ship arrived. Ayshia would be completing her first Navy deployment, and they were not going to miss the ship’s homecoming.

A U.S. navy warship homecoming is one of the most beloved memories of most military families. The tradition of waving sailors and seeing signs that bear their names from loved ones crowding the nearby pier is the Navy way to say “Welcome Home.” After many months of just telephone calls and worrying about their daughter’s safety during this pandemic, Eric and Ellasin were thrilled to be able to be there to welcome her home.

Just three years prior, Ayshia Allen was walking across the stage graduating from King’s Fork High School. In those three years, this young lady has had quite a career journey. After graduation, she studied to be a paramedic. She briefly served with the Isle of Wight Rescue Squad and then made the decision to enlist in the U.S. Navy. She departed for bootcamp on Jan. 8, 2020. Ayshia’s father did not get to say goodbye, because he was on a Navy deployment at the time. The USS Theodore Roosevelt’s homecoming ended the 18 months since her father had looked in his daughter’s eyes.

Her return from deployment is a full-circle, father-daughter moment worth noting. Chief Warrant Officer Eric Allen, served as a young enlisted man on the USS Theodore Roosevelt when Ayshia was 8 years old. Ayshia attended a family day cruise with her dad in 2008, and a picture of her with her face covered in face paint is a treasured memory. Back then, the young girl was not considering becoming a sailor. Many things changed in those 12 years, but one thing remained the same. Ayshia has witnessed first-hand her father’s devotion to family and duty. Allen and his wife celebrated 24 years of marriage on Valentine’s Day. This coming November will mark 24 years since he enlisted in the U.S. Navy. Ayshia is not just following in her father’s footsteps. She chose to answer her own call to service.

Standing near the pier holding a sign that read, “Welcome Home, ABFAN Babydoll,” Ayshia’s father wore his Navy service khaki uniform, a huge smile and some happy, tear-filled eyes. Ayshia Allen is also serving as an aviation boatswain’s mate fuel handler, which is the same rating her father served in as a career senior enlisted non-commissioned officer. Naval service and regular deployments means they will likely observe many other holidays apart. Yet, Allen could not be more proud of the woman she has become. There was no better Father’s Day gift for him than seeing his daughter wear the uniform with a huge smile on her face and knowing that she is safe.