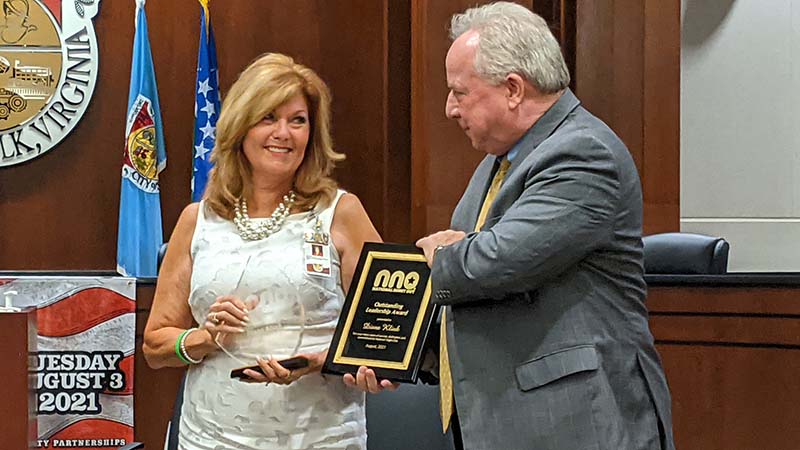 Diana Klink, the city’s National Night Out committee chairwoman, was honored for her years of service. This is her last year in that role, as she will be retiring from her position as a public information officer for the city at the end of the year.

National Night Out participants turned the tables on Diana Klink with a surprise to honor her work as its chairwoman, as she is retiring at the end of the year from her role as public information officer.

During a ceremony Wednesday to honor event participants, Klink was honored for her service in helping the city carry out its National Night Out events, as Suffolk has earned top-five status for 14 years and has five first-place awards for its population category, most recently in 2018 by the National Association of Town Watch.

Klink was honored by the city and by Matt Peskin, president of the National Association of Town Watch, for her years of service to the city’s National Night Out event.

“Thanks to your unparalleled professionalism … your efforts have contributed to make Suffolk a stronger, safer community,” said Mayor Mike Duman in announcing the honors.

Klink, in accepting the honors, joked that this is a warmup for her retirement speech.

“This is my absolute honor and privilege working for this amazing city,” Klink said. “And I just can’t thank you all enough for your support, your dedication and pure commitment. … I cannot even begin to express my appreciation not only for the men and women of Suffolk Police and Suffolk Fire, who I also have the privilege of being their public information officer, but for of course the Sheriff’s Office as well as the Commonwealth’s Attorney’s office, probation and parole (and) the Western Tidewater Regional Jail.

Duman noted that in spite of the rain that fell upon the city during its National Night Out events, it did not dampen them, and the city honored the more than 100 communities, homeowner’s associations, civic groups, neighborhoods, apartment and condominium groups, churches and business sponsors across the city that teamed up for cookouts, entertainment, petting zoos, COVID-19 vaccinations and more, as they received certificates of appreciation.

“While the skies were gray, and it rained off and on for most of the day on Aug. 3, I stated that it would not dampen our resolve, or our quest for a safer, harmonious community,” Duman said. “And it indeed did not.”