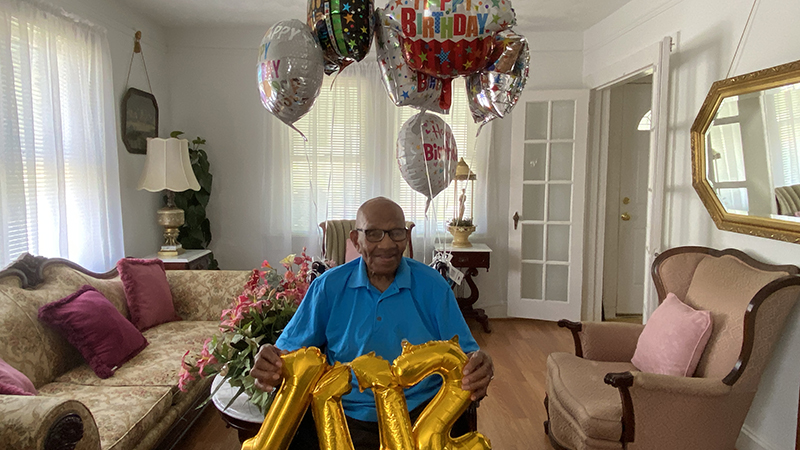 Lawrence was born and raised in the Bennett’s Creek area of North Suffolk and went to East Suffolk High School. After graduating, he worked at the Norfolk Naval Base for a year before being drafted for World War II.

“Glad to be here,” he said. “I had ups and downs like everyone else, but God worked it out for me. Yes indeed.”

This statement derives from a line in the song “Amazing Grace” that he often quotes, “Through many dangers, toils and snares we have already come/t’was grace that brought us safe thus far/and grace will lead us home.” After serving in World War II and seeing the horrors of it, he feels lucky to be one of the men who were lucky enough to come home.

After returning to Suffolk, Lawrence returned to work at the Naval Base and retired with 39 years. He then continued to work for 17 more years doing custodial work for East Suffolk Baptist Church. In his free time, he would also work as a landscaper. His yard on Ben Street in the Hollywood neighborhood was known for being the best kept.

For many years, Lawrence also served as a deacon at his home church, Poplar Run Baptist Church, and was an active member of the Hollywood/Jericho Civic League.

Lawrence is known for his calm and gentle spirit. His son, Tommie Lawrence Jr., recalls him always being a very religious man. Even when he gave his dad hard times growing up, his dad never cursed at him, he said.

He has no secret to living a long life. Instead, he claims he has just been blessed.

“All I can say is do the right thing, treat others with kindness, be helpful, be thankful and most of all ask God to bless you and he will.”

“I tried to do things right and tried to treat people right, and God has blessed me this far,” Lawrence said.