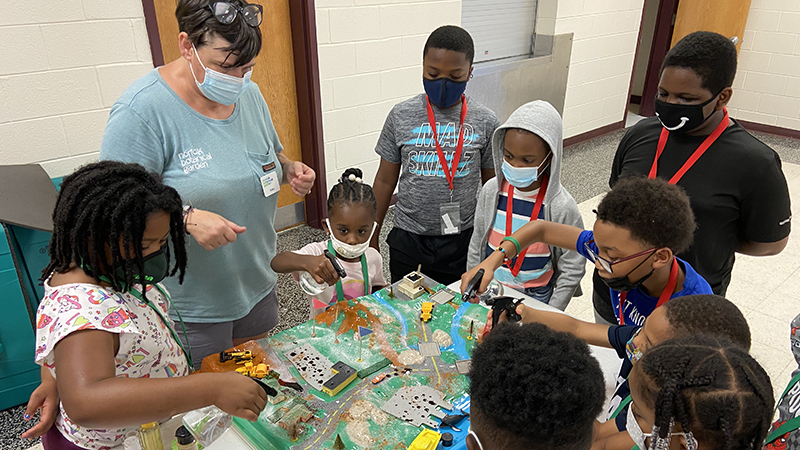 Amy Stich from the Norfolk Botanical Gardens showed the STEAM campers at Booker T. Washington a model of how runoff pollution and watershed plants affect our ecosystem.

Students at Booker T. Washington Elementary School got the chance to spend two weeks of their summer learning about science, technology, engineering, art and math.

As part of a three-year grant from 21st Century Community Learning Centers, students preschool through fifth grade could spend two weeks learning more about STEAM subjects. The school also partnered with AlphaBEST, which provided the curriculum and staff. This was the third and final year of this grant.

An average of 30 students attended the camp. This is the first time since March of 2020 the students have been in a group this large. Many stayed virtual, and those who chose hybrid were in classes of about six.

“It’s like a breath of fresh air for these students to be able to be around each other again,” said Johnathan Creekmur, coordinator of the program.

The students who attended did numerous projects that helped sharpen their STEAM skills, including kinetic energy, coding, environmental science, crafts and literacy, and sports and fitness. There were even take-home activities for the students to continue working on.

“My favorite part was we built cars out of stuff we had on the table, and then we raced them at the park next door on the slide,” said London Little, a fifth-grader participating in the camp.

Another partner for this camp was the Norfolk Botanical Gardens. Each week, staff from the gardens came out to teach the students about environmental science. The students watched a model of a town as food-coloring “oil pollution” settled in parking lots and streets. Then they had the chance to make it “rain” with spray bottles to see the effects runoff pollution has on the environment as the red pollution made its way into the water system.

Staff from the Norfolk Botanical Gardens also taught about the water cycle. The students received a string and individually rolled a large foam die that told them their next stage in the cycle. For example, they could evaporate into a cloud, melt into the ocean, freeze into a glacier and much more. For each step in the cycle, they received a colored bead showing their unique journeys.

The kids enjoyed this time to be together again and transition back to a school setting after being virtual and hybrid for so long.

“We got see our friends and play with each other and talk and meet new people,” said Nykel Wilson, a rising sixth-grader.

According to Creekmur, the students did well with social distancing, wearing their masks and following guidelines.

“This is a great opportunity for students who are returning this fall to get them back in the swing of in-person and safety protocols for a successful upcoming school year,” he said.