‘This has been a long ride’ 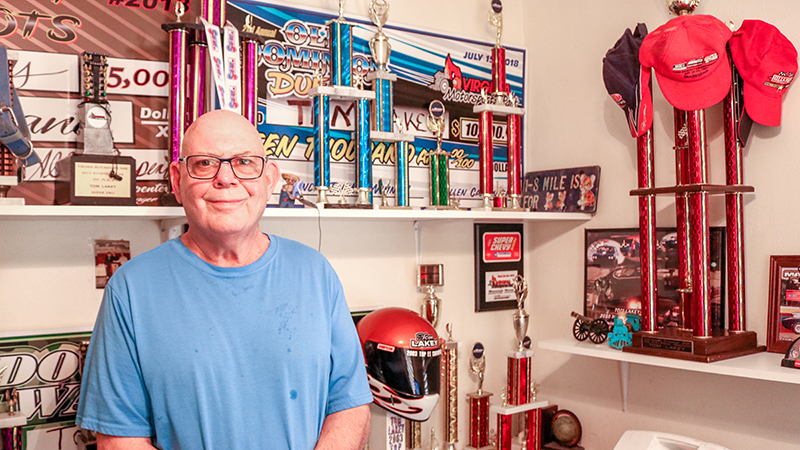 Whaleyville’s Tom Lakey shows off his racing trophies. Lakey has been battling COVID-19 for nearly two months and still doesn’t feel 100%, he said.

Tom Lakey was ready for a festive July 4 weekend.

Instead, COVID-19 was ready for him.

He had the Friday off from his new maintenance job at the Western Tidewater Regional Jail, and he was ready to get on with the weekend and celebrate the Independence Day holiday with friends.

Around midnight, he woke up on the couch of his Whaleyville home covered in sweat, a wrenching headache and a body ache.

After a long and terrible weekend, he went the following Tuesday to the emergency room at Sentara Obici Hospital, where he received some fluids and was sent home.

While he was there the first time, he said he was experiencing a burning in his throat he said he couldn’t get across to a doctor there, and kept drinking water, filling up his lungs with fluid.

Lakey, 63, said he couldn’t recall whether he was tested at that time for COVID-19, but by the end of the week, he went back to Sentara Obici and was admitted to the hospital, where he spent the next 12 days before being released.

He was also experiencing something called thrush — a fungal yeast infection that can grow in the mouth, throat and other parts of the body. He went on a five-day water restriction.

He does not mince words when describing his hospital experience or in describing how he’s felt, and is still feeling, with COVID-19.

A day short of four weeks out of the hospital — on Aug. 17 — he had been able to get off of the oxygen hookup that Sentara provided for him as part of its Sentara To Home program, which is designed to expand hospital-level care while a patient is at home.

The following day marked exactly four weeks since Lakey had been released from the hospital.

He didn’t sleep much for two nights after not being on oxygen — a combined six hours total of shut-eye — but he had enough energy to spend time outside walking in his yard. Thursday evening, he slept “like a baby,” though his wife told him his breathing sounded shallow. On Friday, he felt worse again.

“I woke up with like 2% energy, I could barely crawl into the kitchen,” Tom Lakey said in an Aug. 20 interview. “My wife went back to work. She can’t stay home forever. Now I’ve went backward for the second time. I’m getting a little tired of it.”

His wife, Lauren, who unlike Tom had been vaccinated with the Pfizer-BioNTech vaccine, also got COVID-19 and had a more mild case that did not require hospitalization. She took time off from her job at a credit union to get well and help care for her husband. When he did go home, she tested positive for COVID-19 a second time. A week later, she tested negative. He’s no longer testing positive for it, but he’s experiencing lingering effects of the virus.

“Without her, I don’t think I’d have made it,” Lakey said. “She was very kind about it, very understanding and very tolerant.”

So now he’s back on the oxygen, and he’s not happy about it.

He’s also not happy about getting COVID-19, but by his own admission, he had not been vaccinated, and he was not wearing his mask properly at work — “I didn’t believe in it” — where he believes he contracted the virus from a coworker who did not realize he was sick. Another, younger coworker at that time, he said, also was positive for COVID-19 and was out for about 10 days.

But with an underlying heart issue, Tom Lakey was also more susceptible to getting the virus. He said he needed a heart valve replaced, but had not been able to have the procedure when COVID-19 began spreading in the U.S. more than 18 months ago.

He said last year, he may have known one or two people who had COVID-19.

That number is in the dozens.

“This has been a long ride,” Lakey said. “I guess I’m going to come out of it. I’m starting to wonder. I was feeling so good for three days. Last time, I was getting ready to go off oxygen, then went backward because of the saturation. I got rid of that problem, I worked my way back without oxygen, slept seven hours, I wake up and I’ve got the oxygen back on. I’ve got it back down as low as it’ll be right now.”

Lakey teased Lauren about getting the vaccine. She got it, he said, because she has a heart murmur.

“I got on her for getting it,” Tom Lakey said. “I don’t want to put politics into his, but I don’t like our current administration,” referring to President Joe Biden.

“The way they’re trying to shove it down everybody’s throat, the fears, I just wish the FDA would approve it, and everybody would shut the hell up and get the damn vaccine.”

The Food and Drug Administration did give full approval to Pfizer’s COVID-19 vaccine for people ages 16 and up Aug. 23.

His wife’s son also contracted COVID-19, but like her, he was vaccinated and also had a mild case.

He’s hoping he can have the procedure for his heart valve sometime next month so he can fully recover and go back to work.

Lakey said several of his friends have gotten vaccinated since he came down with COVID-19, though he knows others won’t be swayed, even by what he’s experienced. Still, he plans to get vaccinated as soon as he is able.

His biggest issue now is simply breathing, fatigue and keeping his oxygen levels up. Lakey felt discouraged after experiencing three of his better days since before he contracted COVID-19 before feeling worse again. Though he’s not feeling as awful as he was when he first got the virus, it’s still keeping him from fully functioning.

“Can you imagine? I’ve been on a 50-foot leash for a month in my house with a (tube) up my nose,” Lakey said. “I went three days without it. I thought I was in heaven.”

He said he can breathe without being on the oxygen, but it won’t stay at the proper level without it.

Though his wife has lost, at least for now, her sense of taste and smell, she’s doing better, though she’s not sleeping well either and tired.

He’s glad he can recover at home. “It’s a lonely, devastating affair to go through this in the hospital,” he said.

He’s weary and in need of rest, but he’s ready to receive the vaccine, have surgery for his heart valve and feel well enough to get back to work and return to his 35-year hobby of drag racing.

“I’m going to get it,” he said. “This has been an eye-opener. … I’m ready to get this over with and get back to a normal life.”