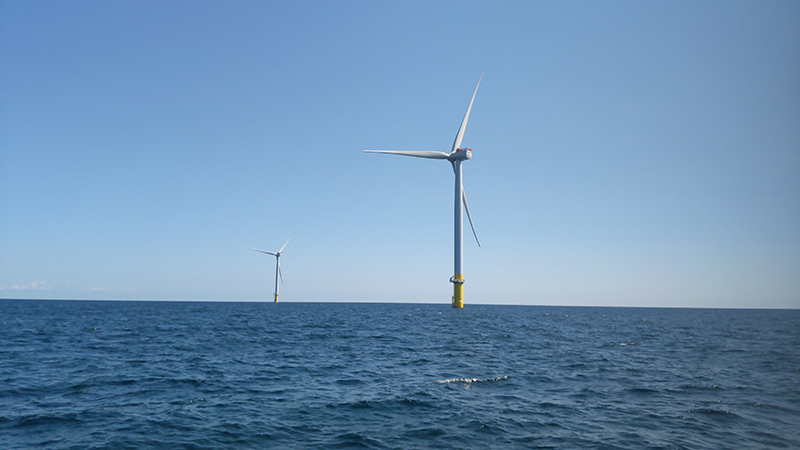 Dominion Energy will pay $44 million over 10 years to lease 72 acres of the Portsmouth Marine Terminal from the Port of Virginia to be used as a staging and pre-assembly area for the foundations, and as many as 180 14-megawatt, 800-plus-foot turbines to be installed 27 miles off the Virginia Beach coast.

Dominion Energy will pay $44 million over 10 years to lease 72 acres of the Portsmouth Marine Terminal from the Port of Virginia to be used as a staging and pre-assembly area for the foundations, and as many as 180 14-megawatt, 800-plus-foot turbines to be installed 27 miles off the Virginia Beach coast.

The company will also have two five-year options to extend its lease, with the agreement including “significant upgrades” to make sure the terminal can handle the weight of the large components that will be used to build the wind turbines. Once loaded on ships, the turbines will be taken to the construction site.

The offshore wind farm is expected to produce more than 2,600 megawatts of renewable energy and is capable of powering up to 660,000 homes.

“This location at the Port of Virginia is second to none,” said Dominion Energy president and CEO Robert Blue in a statement Wednesday. “It has deep water access, no overhead restrictions, a strong, experienced maritime workforce and sufficient space for these large wind infrastructure components. It is perfectly situated to serve the Virginia offshore wind project and grow the domestic supply chain needed to complete other offshore wind projects in the United States.”

The state and Danish offshore wind developer Ørsted came to an agreement last year to lease 1.7 acres at the same terminal for offshore wind equipment and staging materials through at least 2026, with options to expand to an additional 40 acres. That deal could be worth about $13 million in lease payments, with potential site upgrades worth more than $20 million.

The newest agreement announced by Gov. Ralph Northam at the Business Network for Offshore Wind’s International Partnering Forum comes 18 months after the General Assembly passed the Clean Economy Act, which set a 2034 target for the production of at least 5,200 megawatts of energy through offshore wind (and a target of 16,100 megawatts of solar and onshore wind power), as well as a 2045 target for Dominion Energy to achieve 100% carbon-free energy production.

“This announcement is yet another milestone toward making Virginia the national leader in offshore wind power,” Northam said. “The Commonwealth and Dominion Energy are standing together to promote clean energy, reduce carbon emissions, create jobs, and build a new American industry on the East Coast of the United States.”

Northam and Blue recently talked at the forum, a three-day global conference in Richmond — another day was spent in Virginia Beach and South Hampton Roads touring the offshore wind project and the Port of Virginia.

Negotiations on the lease agreement between the port and Dominion Energy picked up last month when the Virginia Port Authority’s board of commissioners directed the port’s CEO and executive director, Stephen Edwards, to wrap up the lease negotiation. He said the port is ready to support Dominion Energy and the businesses and jobs expected to come from the project.

“For the last several years it has been known that The Port of Virginia, and specifically the Portsmouth Marine Terminal, is positioned to be the leading Mid-Atlantic logistics hub for the offshore wind industry,” Edwards said. “This agreement capitalizes on PMT’s potential and solidifies Virginia’s place as the leader in this growing and competitive field.”

State Secretary of Transportation Shannon Valentine said the deal “positions the Port of Virginia as the hub of this emerging industry and Virginia as the forerunner in offshore wind.”

President Joe Biden has set a 30-gigawatt target for offshore wind capacity by 2030.

Dominion Energy has two wind turbines currently operating off the coast of Virginia Beach, and last month, the Bureau of Ocean Energy Management issued a notice of intent for the commercial project, which begins the federal review process and the preparation of an environmental impact statement, expected to take about two years.

Dominion is building a 472-foot, $500 million Jones Act vessel in Brownsville, Texas in partnership with Ørsted and Eversource, expected to be sea-ready by late 2023. Once ready, it will be homeported in Hampton Roads and will be able to handle current turbine technologies and next-generation turbine sizes of 12 megawatts or larger and will be able to handle turbine foundation installation.

To build just two wind turbines, Dominion had to ship their components vertically on a foreign vessel from Halifax, Nova Scotia, Canada to the offshore Virginia site, which cost roughly $300 million. That’s because there were no Jones Act vessels capable of the job, and part of the fiscal year 2021 National Defense Authorization Act requires using Jones Act vessels for the construction of offshore wind farms.

The port is in the process of widening and dredging its shipping channels to a 55-foot depth.