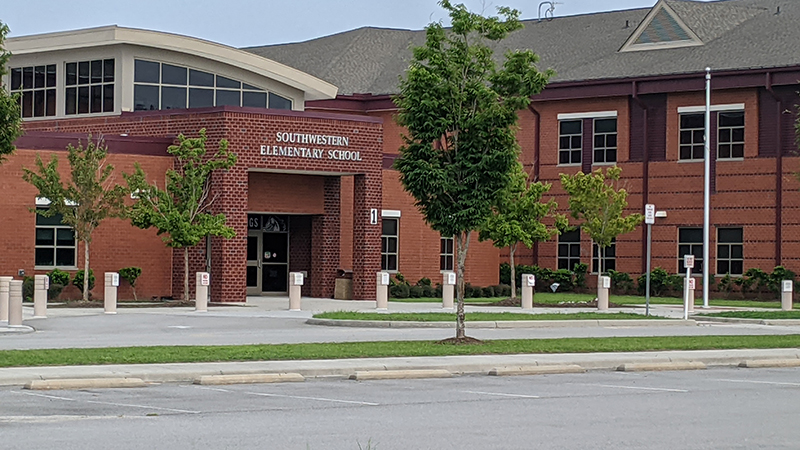 When the old Southwestern Elementary closed in 2014, students performed the song, “So Long, Farewell,” in the style of “The Sound of Music.”

Now that the name has returned, students from the Musical Mustangs greeted it during a Sept. 1 renaming recognition ceremony with a pair of songs, “Back to School” and “Agents of Change.” Both are songs with much meaning given the coronavirus pandemic, the return of the Southwestern name and children signifying a new generation of change agents.

Many had expected the name to carry over to a newly built school off of Holland Road, but after a school naming committee had favored keeping the name Southwestern, the Suffolk School Board at the time instead voted 4-3 to use the name Pioneer Elementary, seemingly signifying a fresh start for a newly-built school.

But late last year, School Board member Tyron Riddick made a push to return the name Southwestern back to the school, and that December, by another 4-3 vote, the board did just that and voted in favor of honoring the heritage of Black students who attended the Nansemond County Training School and then various iterations of Southwestern. The name change took effect July 1.

Superintendent Dr. John B. Gordon III said he got an early history of Southwestern and the Nansemond County Training School from Riddick and former Southwestern Elementary principal Lorita Mayo, currently a School Board member.

“Now, it’s really about preserving the legacy,” Gordon said. “To me, that’s the key. Suffolk is so rich in tradition, so rich in history. This is a piece of history we don’t want to let go. I understand the reasoning why Pioneer was originally chosen, but you’ve got to make change based on … the people it affects.”

Gordon, in remarks during the ceremony, talked about how active the Southwestern Alumni Association has been in supporting the school, even though it was called Pioneer and not Southwestern as its members wanted.

“To me, this is just one of those opportunities where we can teach our kids some new lessons and hopefully we can move forward all together,” Gordon said.

Southwestern Principal Lori Mounie, Assistant Principal Dr. Sabrina Lee and Gordon unveiled a display case at the entrance to the school showing items that had been a part of the training school and previous versions of Southwestern, including a photograph of Dr. Hannibal E. Howell Sr., who served as principal of the Nansemond County Training School from 1919 until 1961.

Current Board chairwoman Dr. Judith Brooks-Buck, who had previously voted along with then-Board chairman Enoch Copeland for the name to stay Southwestern and voted last December for the name change, noted her own path in being a student in a segregated school system when a child in Norfolk.

And it meant a lot for her to see members of the Southwestern Alumni Association, including its president, James Harold Faulk, in attendance at the ceremony.

“They continued to support the school and be a part of the school community, so I think it shows the kind of character, the kind of people that you’re dealing with, and how much this school means to this community. What I’m happy for is that we got a chance to do something positive for these people. And we got a chance to recognize their efforts, their history, and to give back something that we should have done, correct a mistake we should have done long ago.”

Faulk, in his remarks, paid tribute to Southwestern alumni, and to Copeland — “the backbone of this entire idea.”

“Today, to come back and be a part of the renaming to Southwestern, certainly brings a lot of joy.”

Faulk said they worked for many years to maintain a positive legacy of Southwestern school for the community. He said that will continue.

“Now, we feel we’ve reached a portion of the goal that we’ve had,” Faulk said, “and that was to get the school named Southwestern.”