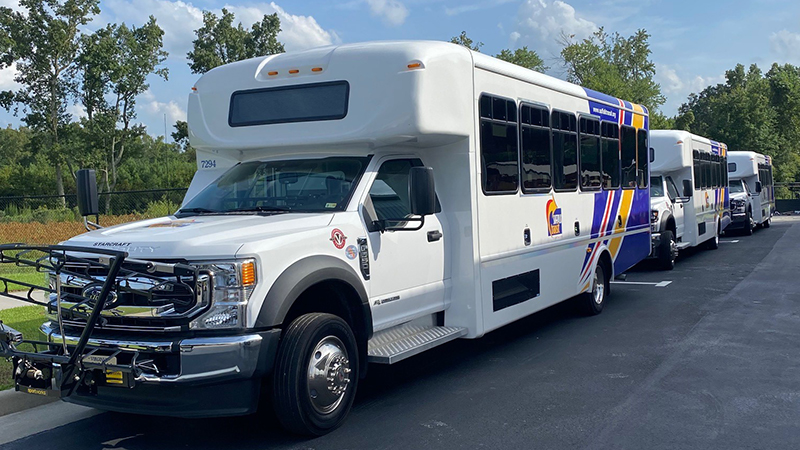 Suffolk Transit will introduce three larger buses to its fleet this month to improve service and keep pace with growing demand.

“During peak times on some routes, we needed to increase capacity to meet demand for the service,” said Maria Ptakowski, Suffolk Transit manager. “Outside of peak times, it allows our passengers a little more space to social distance. An additional benefit to the new buses is the increase in their useful life as they are built on stronger chassis.”

Expected to begin service on Sept. 7, these larger buses are part of route improvements taking effect that day as well. Passengers can expect changes to many of the routes. The improvements to the routes include:

Green Route — Will be a bi-directional service creating new direct connections to popular destinations. The Green Route will operate between King’s Fork High School, the Downtown Transfer Station, and the Saratoga neighborhood south of West Washington Street. The segment between King’s Fork High School and Pruden Boulevard will be discontinued. Additionally, deviations into the Main Street Shoppes and Western Tidewater Community Services Board will be discontinued.

Red Route — Will be a bi-directional service through the downtown area extending the route to the Pruden Center (currently part of the Green Route).

Yellow Route — Improvements include creating a more direct route that will promote faster system-wide connections between the CenterPoint Industrial Park area, the Food Lion on Holland Road and the Downtown Transfer Station. By making the Yellow Route more direct, riders who connect to the distribution centers off Holland Road will have a faster trip to the Downtown Transfer Station. The new Yellow Route will serve a short segment on North Broad Street and West Constance Road that is currently served by the Red Route. The Yellow Route was identified as a candidate for interlining with a route with a longer runtime. Suffolk Transit plans to interline the realigned Yellow Route with the realigned Pink Route.

Pink Route — An additional hour of service will be added to the Pink Route and will now run Monday through Friday from 6:30 a.m. to 5:50 p.m. There will be no break in service at 9:30 a.m. which previously occurred. Changes to the route include a bi-directional service across the entire proposed alignment. The current Pink Route operates on Portsmouth Boulevard without stopping. By running the route on Nansemond Parkway, Progress Road and Wilroy Road instead of Portsmouth Boulevard, riders will have service in both directions and have closer connections to job centers. Additionally, the HRT Transfer Station in Chesapeake will now be served in both directions; helping riders from both Downtown and Northern Suffolk connect to HRT routes and the region. This new route alignment will result in a runtime that exceeds the hourly headway, which will be addressed by interlining with the Yellow Route.

Saturday service will include the new Green, Yellow and Pink Routes with the new Yellow Route replacing the Blue Route. The Orange and Purple Routes will remain the same. Operating hours remain the same.

“Our goal is to develop a service that accommodates the needs of the community,” Ptakowski said. “We understand in the short term there will be a transitioning period for our passengers, but I am confident they will see the benefits moving forward. The Suffolk Transit team is available if anyone needs assistance. Additionally, people can download the ETA SPOT app, which has all the route information and has a live bus tracker which tells you where the bus is located in real time.”

To view maps of the new routes and for further information, visit www.suffolktransit.org or call 757-214-6442.