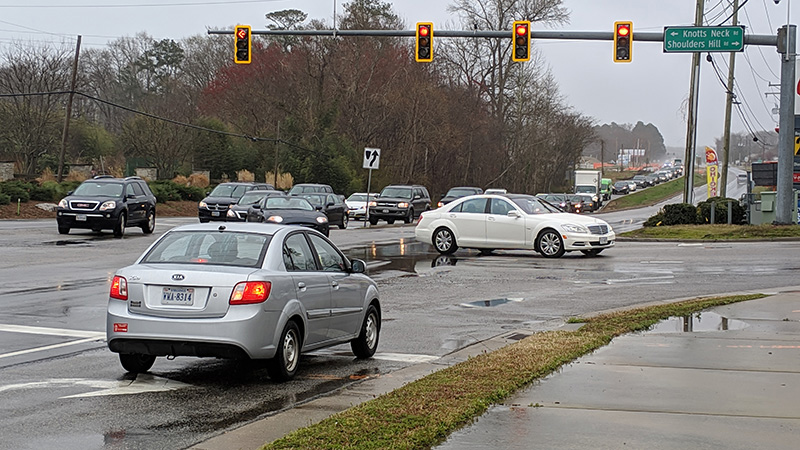 A triple-left turn lane off of Bridge Road is just one of several improvements coming to the intersection with Shoulders Hill Road in the highly-congested North Suffolk area, as construction preparations are nearly complete.

Interim Public Works Director Robert Lewis said there would also be a new lighting system for the intersection, with lights on the medians and on Shoulders Hill Road. He said “smart eyes” on top of the lighting would provide the city with real-time information on how well lighted it is, allowing it to brighten or dim them if needed and will automatically notify the city if someone hits a pole.

It’s a similar lighting system to what’s being put on U.S. Route 58, and if all goes as expected, it will be a city standard going forward.

“It creates a communication backbone for us,” Lewis said. “It’ll enable us to respond much, much faster to a light being out and get it repaired than what we can get today from the utility company.”

The project will also see upgrades to the stormwater system, curb and gutter improvements, street lighting and sidewalks.

But before the city could put the actual construction of the project out for bid, it needed to finish acquiring the property needed to carry it out and perform some demolition work in the area. Council approved that part of the process in March 2019.

A pair of properties along Shoulders Hill Road near the corner of Bridge Road that the city planned to take over for the project will now stay with their original owners. SERVPRO and Sessoms Automotive will now be able to stay where they are, as the city was able to minimize land impacts on their properties.

The city reviewed the intersection plans with its engineering and right-of-way design consultants, and now, both business owners will be able to stay, albeit with some small losses of property.

“We were able to go back and redesign a little bit — end(ed) up just taking a piece of property off the front, a corridor off the front for the road widening and a little bit of corridor next to that for the utility widening that needs to be done,” Lewis said, “and leave those properties essentially in whole.”

Lewis said the city has compensated both businesses for the loss of parking, and it is working with them on mitigating that.

The city has acquired all of the needed right-of-way through agreements with the property owner or acquiring the properties. Lewis said all demolition of conflicting business structures has taken place, and the process of moving utilities is under way.

Dominion Energy is expected to finish moving its utilities off the poles by Sept. 15, while Lewis said the other utilities that are on the poles will be moved soon after, including telephone, cable and some fiber that the Public Works Department and Suffolk Public Schools both use.

Lewis also explained how the city removed three large silos that had been empty for “a number of years” and were deteriorating. The city had the former gas station on the corner of Bridge and Shoulders Hill roads demolished and the gas tanks removed from the ground.

Engineering and construction plans for the intersection are complete and will be sent to the Virginia Department of Transportation for review by Sept. 15.

Members of council supported the changes to preserve the businesses at their respective locations.

Councilman Roger Fawcett said the project is necessary at that intersection given the traffic on both roads and could be a catalyst for further expansion of the Bridge Road/U.S. Route 1 corridor west to the Mills Godwin Bridge.

Dominion’s contractor, River City Construction, has done “fantastic” in its work to relocate its utilities, Fawcett said, and has not impeded traffic flow along Bridge Road. He also praised the demolition of the silos and, while he was disappointed to see Rodman’s Barbecue leave as part of the land acquisition, he is pleased to see the other businesses able to stay where they are.

“They really wanted to keep their businesses there,” Fawcett said, “and I applaud the city for paying attention with all the participants to be sure that those businesses can stay viable and continue to operate.”

Fawcett said, however, that truck traffic using Shoulders Hill Road to get to Nansemond Parkway needs to be looked at.

With the city’s Amazon robotics fulfillment center set to open in the next couple of months in Northgate Commerce Park where Shoulders Hill Road and Nansemond Parkway intersect, he said the road, once construction begins, will not be able to handle the truck traffic. He would like to restrict truck traffic during the intersection construction or restrict the weight load of the trucks using the road.

“No matter what the traffic count says, it can’t do it,” Fawcett said. “We will have more issues on that road because it’s going to choke back down to a one-lane road before it’s over with.”

VDOT’s review will take 30 to 60 days, and the city hopes to put the project’s construction out to bid by Dec. 15, and hopes to start construction by March 15, 2022, with the work expected to take an additional two years.

The funding for the project is a combination of federal, state and local money, with project engineering costing about $1.7 million, right-of-way access about $9.8 million and construction pegged at roughly $12.5 million, spread out over the next two to three years.

“As you can imagine, this is going to be one of those that’s going to be especially challenging because of the amount of traffic we’ve got up there to deal with,” Lewis said. “But again, we think we’ve got a good plan.”