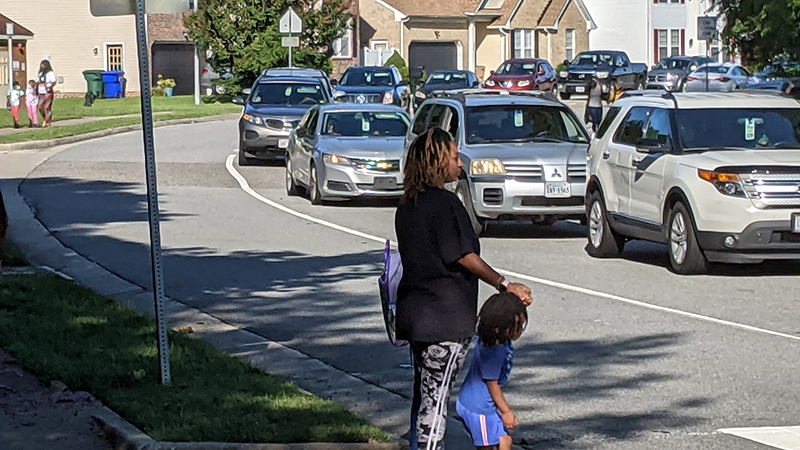 The dramatic increase in parent drop-offs and pick-ups every day at the city’s public schools has caused lengthy backups spilling out onto main thoroughfares, delays to the start of the school day and tension among some parents.

Superintendent Dr. John B. Gordon III told the School Board at its Sept. 9 meeting that the division was seeing five times as many drop-offs at elementary schools across the division. However, at Hillpoint Elementary School and King’s Fork Middle School, those schools have seen 10 times as many parent drop-offs.

At Hillpoint Elementary School, lines stretched more than a mile from the entrance to the school during the first two days of school. On Sept. 10, the line of cars during morning drop-off was out of the street by 9:30 a.m., five minutes after the elementary school start time, and 10 minutes later, the line of cars was gone.

Hillpoint, a focal point of long lines getting into and out of the school, has had more than 450 parent drop-offs and pickups for a school that had an enrollment of 692 last year.

According to King’s Fork Middle School Principal Darrell Medley, the school has had about 500 parents dropping off and picking up students. Its enrollment over the past school year was 1,034.

At Mack Benn Jr. Elementary School, Principal Garrick Rhoads said that their drop-offs on day two of school Sept. 8 had gone smoother than the first day, having tweaked their process. In normal circumstances, it would see about 40 to 50 parent drop-offs and pick-ups. Instead, there have been about 180. Its enrollment in the 2020-2021 school year was 637 students.

On the first day of school, Elephant’s Fork Elementary School had a drop-off line that stretched from the front of the school, through its parking lot, onto a side street and then onto the bridge above the U.S. Route 58 Bypass. It still had two buses that had not made it to school by 10 a.m.

Though no enrollment numbers are yet available for individual schools, the division as a whole has had more than 14,200 students enroll so far this year — that amount has grown by about 100 students since school started Sept. 7, according to Gordon.

He said it will add additional staff in the mornings and afternoons to help with the drop-off and pick-up of students. The division will also pay teachers to stay later, he said, and they plan to add crossing guards and police officers to help with traffic at schools.

“We’re working on arrivals and departures, a better, smoother process for parent pickup and after,” Gordon said. “Parents have asked me (to) let them out early. No, because you’ve got to be careful about changing instructional staff.”

One of those parents spoke before the School Board Sept. 9 to highlight issues some parents have had at Hillpoint with regard to picking up and dropping off their children. He said staff there treated him and other parents who had been waiting for more than an hour after the second and third days of school rudely, and was told they didn’t follow the process.

Though school officials have said the drop-off and pick-up process has improved over the first four days of school, parents have been hesitant to put their children on buses, something Gordon acknowledged.

“I understand that parents have hesitation about putting their students on the bus because of the closed-in space or the potential spread of COVID-19, which has increased our student drop-off and pick-up lines tremendously.”

He said each school, and the division’s administration, is working to address the problem with traffic flow at each school.

“The entire school administration, the transportation department and the police have worked very closely with us to try and figure out some different strategies that we can use to try and alleviate some of that.

“But here’s where I need the city of Suffolk, as well as our constituents and our parents, to help us. Our administration at each building has developed a parent pick-up and drop-off plan that must be followed to the T. When we get impatient, and decide to drive around cars, or to drive into the bus loop, and to do other things such as that, we’re causing safety hazards. We’ve had accidents near our schools. We’ve actually had an accident on school property. We’ve had staff that has not been able to get into school in the morning because parents have doubled up in some lines.”

He said the biggest issues have come with delays in getting elementary school students to school, since they start school after middle and high school students.

Buses getting to schools have also faced some delays. The division had six drivers call out sick on the first day of school.

“While we had a bus driver shortage of only five, which is pretty minor compared to a lot of the school divisions in the region, when taking into consideration that each bus driver does three routes, so that’s an additional 18 double-ups that had to occur … we’re working through that,” Gordon said.

The school division has been in touch with the Suffolk Police Department about adding additional officers and a crossing guard at Hillpoint. He said it will take feedback from everyone in tweaking the routine.

“You must be patient,” Gordon said. “This is different. This is different. Anytime you have that volume of parents taking the kids to school, not to mention that we’ve also had two times and three times as many walkers to school, in a neighborhood such as Hillpoint, that causes some issues.”

He stressed that people be safe when driving around school buses, and to be mindful of high school student drivers who are on the road.

“We’re going to work through it,” Gordon said, “so I’m asking for the next couple of weeks that our entire school community to please be patient.”