Amazon near ready to open, other projects moving forward 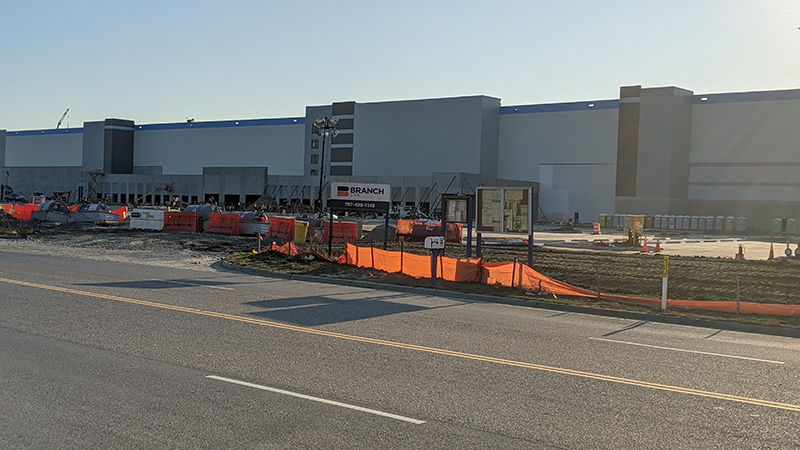 The Amazon building in North Suffolk is seen at an earlier stage of construction in this March 10, 2021, photo. It is getting ready to open soon. (File Photo)

The second-largest building in the state will be primed and ready to be operational by late September or early October.

The 3.8 million-square-foot, $230 million Amazon robotics fulfillment center in Northgate Commerce Park, which will employ about 1,000 people, will open about two miles away from another fulfillment center just across the city line in Chesapeake. Its ground footprint is 822,833 square feet, and the building stands at 95 feet and four-and-a-half stories tall.

The Suffolk fulfillment center will work alongside robotics and other technologies to pick, pack and ship smaller-sized customer orders to people in Hampton Roads. Chesapeake’s Amazon facility, a 650,000 square foot processing center in Western Branch, is also expected to open soon and employ about 500 people.

Amazon recently opened a pair of delivery stations — a 165,000-square-foot facility in Norfolk and a 111,600-square-foot facility in Hampton, and will be opening a new career center in Chesapeake. It will serve as a hiring and orientation center for its Virginia operations locations in Suffolk, Chesapeake, Norfolk, Hampton and Virginia Beach. The company is in the midst of developing plans for a second headquarters in Arlington.

Deputy City Manager Kevin Hughes said city inspectors have been on site on a near-daily basis working to finalize all the ones needed to be able to open the facility. According to online city inspection data, there have been 158 inspections so far on various aspects of the project dating back to when construction began 18 months ago.

Construction, among other things, has involved driving piles every eight feet around the entire base. He said Amazon took lessons they learned in building other fulfillment centers in the construction of the one in Suffolk.

More is happening in the central part of the city at the Virginia Port Logistics Park off of U.S. Route 58, as Massimo Zanetti is expected to soon have the ribbon cutting for its 350,000-square-foot facility, according to Acting Economic Development Director Gregory Byrd, who briefed City Council at its Sept. 15 work session.

Byrd said another project directly behind Massimo Zanetti, dubbed Project Clean, could soon have an occupant.

“It’s a project that’s coming to us and it’s far enough along the line where, in the design, was this speculative building while the Massimo Zanetti building was under construction,” Byrd said. “They’ve already gone vertical. … and moving forward.”

“You don’t put something in review without having the money behind it,” Byrd said. “So it costs you to have it reviewed, so these folks are serious about what they’re doing. They’re not just getting plans made and they’re going to sit on them. There are a lot of opportunities taking place that go beyond what we’ve seen constructed already.”

There are other industrial sites — an 813,771-square-foot location at the Coastal Logistics Center at 150 Judkins Court near the intersection of U.S. Route 13 and the Carolina Road bypass, a pair of buildings at the Portside Logistics and Commerce Park at 6601 Park Drive with a combined 580,000 square feet, and another 124,800-square-foot site at the Virginia Port Logistics Park — where there are site plans under review.

Of the site at the Coastal Logistics Center, Byrd said that it’s one of the largest buildings the city has seen “in quite some time in this region to be built speculative. I suspect they’ll have some clients before they get there. Whether or not we’ll know about that remains to be seen.”

“They’re anxious to get that plan approved,” Byrd said, “so they can construct this building speculative and get to the market.”

Of all the sites under development, Byrd said that in six to eight months, “when you’re presented with what’s been developed, I believe you’re going to see some of these buildings with occupants.”