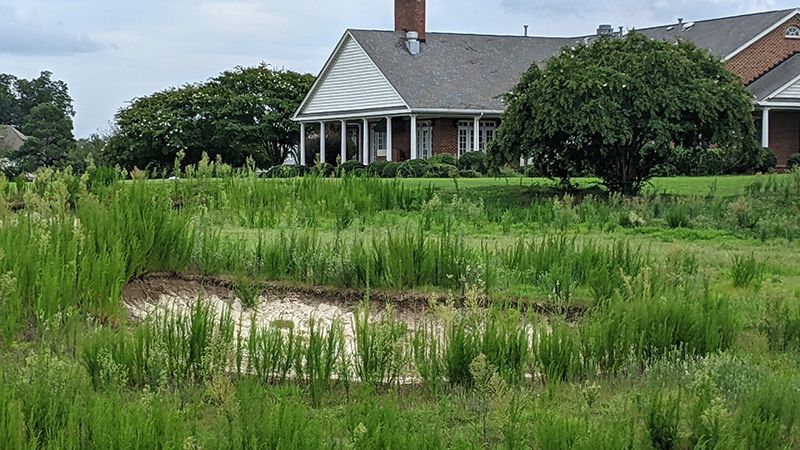 Part of the former Nansemond River Golf Course is shown overgrown on a recent day. Suffolk City Council voted this week to approve a housing development there.

Part of the site of the former Nansemond River Golf Course will be the site of 195 homes following a unanimous vote Sept. 15 by City Council to approve a conditional rezoning to amend the master plan for Hillpoint Farms.

No matter the vote, however, the homes would have come, since a previous council had already approved them. The original approved master plan approved in 1986 called for more than 2,400 dwelling units, and an amended master plan council approved in 1997 reduced that total to just over 1,800.

The development in the bustling Godwin Boulevard corridor will use 54 of the 138 acres of the former Nansemond River Golf Course for the new homes and leave the remaining 84 acres for stormwater management and open space. The Hillpoint Farms Homeowners Association would manage those areas, according to a staff report for the proposed master plan changes.

Homeowners had expressed concern about the costs for the homeowner’s association of maintaining the open space and clubhouse.

However, Melissa Venable, owner of Land Planning Solutions and representing the applicant, property owner Mark Lambert with River Highlands LLC, said after looking at rough budget numbers, homeowner fees from the proposed 195 new homes plus the River Highlands community committing becoming part of the Hillpoint Farms Homeowners Association, it would bring in about $150,000 in fees yearly. She also said that $20,000 to $30,000 would be needed for grounds maintenance on the new property, but “ample dollars” would be available to maintain the clubhouse.

Venable said during an Aug. 17 Planning Commission public hearing that the property owner wanted to build 155 single-family detached homes and no more than 40 duplex or townhomes on the golf course land, rather than build 193 single-family homes elsewhere on the property.

The homeowners in Hillpoint would increase their home values by adding the 84 acres of open space and adding an existing clubhouse to the community, she said.

Ray Orland, a Hillpoint Farms resident who said he was the seventh family to move there, wanted a minimum distance between detached homes, saying homes there are already too close together.

“I don’t want to pull out of my neighborhood … and I don’t want to see them six and seven feet from each other,” Orland said during a public hearing.

Venable said the property owner would work with the city’s planning department to ensure that new homes would be consistent with lot sizes and setbacks for Hillpoint Farms, noting that because the property is zoned planned development district, it doesn’t have specific setback requirements.

In October 2016, the golf club’s size was reduced after an approved rezoning of 37.65 acres from planned development district to residential urban district allowed for those homes, included in the 1,813 units already approved.

The Hillpoint Farms master plan was last amended in December 2019. That approval allowed the moving of 230 of the 394 proposed multi-family housing units to a 12.8-acre site on the eastern part of the property that will have two access points off of Hillpoint Boulevard. A site plan for the Port 58 Apartments was approved March 17, and they are now under construction off of Hillpoint and Godwin boulevards.

In 1986, council approved a rezoning request to create the Hillpoint Farms Planned Development Housing District, with the original master plan calling for 2,448 dwelling units and no more than 513 multi-family units in the planned development. In September 1997, an amendment to that master plan reduced the total number of units to 1,813 and moved the golf course location to its site until it closed late last year.

To this point, 1,520 units have been built, are under construction or are accounted for through either a development plan submission or one that is expected.

Among other elements as part of the package would be a kayak launch, and may include areas that can be reforested, which Venable said has been identified for the homeowner’s association, helping to decrease maintenance costs and preserve wildlife areas. The golf cart path will be converted into a multi-use path for walking, hiking and biking.

“These elements all will provide a tremendous asset to the Hillpoint community,” Venable said.

The homes will not affect levels of service, since the number of homes falls within the original density provided with the planned zoning for Hillpoint Farms.

Lambert noted that he has been in the golf business for about 50 years, and when the course opened in November 1999, there were no homes in Hillpoint Farms. One of the issues with the golf course is that people who played on it were from other cities in Hampton Roads and over the years it was open, there were no more than 10 to 12 members who were from the Hillpoint neighborhood.

He said a typical neighborhood golf course should draw a minimum of about 11% of its members from the community directly surrounding it. That would have given it about 150 members, which, Lambert said, “would have gone a long way to sustaining us.”

He and his three partners closed the course Dec. 31.

“Nansemond River Golf Course, in fact, was a beautiful golf course,” Venable said. “But golf did not suit Hillpoint. Therefore, a transformation that can provide open space and amenity to an existing neighborhood by adding a small, additional neighborhood, I believe, is a good compromise.”