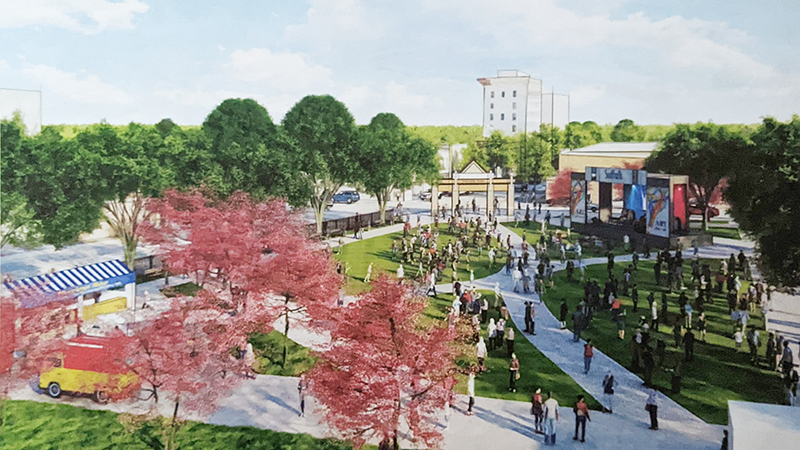 City officials have unveiled plans for a festival event site in downtown Suffolk off of West Washington and Saratoga streets.

City officials have unveiled plans for a downtown festival event site on properties that were heavily damaged last year by a tornado.

First outlined publicly during a City Council retreat earlier this month, Deputy City Manager Kevin Hughes and other officials said such a site on properties the city now owns along South Saratoga and West Washington streets could be a catalyst for more activity downtown. Since the Aug. 4, 2020 tornado, the city bought downtown properties as it prepared plans for them.

“The acquisition of this property here brings greenspace to downtown, I mean, it’s going to bring it all together,” said Mayor Mike Duman. “I know there was a lot of intervention, whatever it is, but somebody’s looking out for us. I think when the product is done, it’s really going to be something that our citizens will definitely be proud of. It’ll be an attraction for downtown, and …  it’ll just be another catalyst for private investment.”

The project has funding through the city’s Capital Improvement Program and Plan, with $150,000 set aside for the current fiscal year 2022 for a festival/events venue and Market Hall. An additional $250,000 is slated for fiscal year 2023 and $300,000 for fiscal year 2024, but those amounts will have to be approved by council when it approves subsequent CIPs.

The festival park site could also, Hughes said, play host to events that have traditionally taken place downtown while having the potential to attract new ones. It would be known as Festival Event Park.

The Planning Commission, at its Sept. 21 meeting, voted unanimously to recommend changes to the city’s Downtown Master Plan to allow for that park, along with the smaller Courthouse Park – known as Festival and Market Square, next to the city’s courthouse on North Main Street that would be used as a small performance and event venue. Council is expected to take up the matter at its Oct. 20 meeting.

The new Festival Event Park would have a gateway entrance that could be used to showcase upcoming events and include a stage area, a location for vendors and food trucks, utility pedestals and additional parking at the site. It would also include greenspace for use by downtown residents when not in use for events. Private groups would also be able to use the site.

“It gives us a great opportunity for a lot of other things,” Moor said, “working with the cultural arts center, talking about an arts festival, or something like that.”

Hughes noted the historical aspect of the festival park site, which used to be home to the Suffolk Hotel in the 1880s. After it burned down, it was replaced by the JC Penny Company building, which he said was not as notable a building, but prominent from the corner.

“We drew upon that JC Penny, kind of ornate, really interesting look building at the hard corner here,” Hughes said.

He said they also visited the larger Town Point Park in Norfolk and drew upon lessons learned there.

“We think we can expand upon the festivals that we do,” Hughes said.

For at least the first year, the city plans to use the Parks and Recreation department’s mobile stage to determine where best to locate a permanent one.

Hughes said the city would then go to the Historic Landmarks Commission for demolition approval for the structures on those sites.

He said the city would likely be proceeding “on dual tracks” along with the $23.3 million downtown library project on West Washington Street between Lee and South streets, doing demolition there also.

“Washington Street over the next couple of months is going to look vastly different,” Hughes said to the Planning Commission, “in transferring into a really brighter day.”

Over time, he said the city hopes to be able to connect the festival park and new library sites, connecting the new parking space to the library.

Hughes anticipates moving “very quickly” from demolition into design, simultaneously, “hopefully towards fall, maybe, kinda, sorta, if everything kind of all works out in our favor.”

Isle of Wight shooting results in fatality, suspect at…