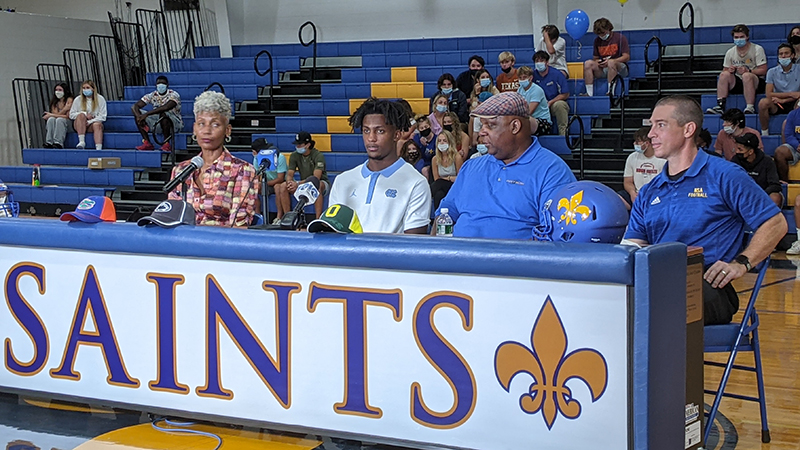 George Pettaway committed to the Tar Heels during a signing ceremony last week.

He’s the seventh-rated high school running back in the nation for the class of 2022, and the top-rated running back in Virginia according to 247Sports, so it was no wonder that Nansemond-Suffolk Academy four-star prospect George Pettaway’s college choice would generate interest.

It was enough for CBS Sports HQ to broadcast his announcement live from the school’s gym, bringing national attention to the announcement.

So beside his parents, Tricina Pettaway and Russell Pettaway Sr., and Saints coach Mike Biehl, and surrounded by the school’s faculty, staff, family, friends and teammates, Pettaway feigned grabbing hats from two of his four choices — Penn State and Oregon — before grabbing and donning the University of North Carolina cap, unzipping his sweatshirt to reveal a Tar Heel polo shirt.

The 5-foot-11, 190-pound Pettaway had narrowed his choices to Oregon, Florida, Penn State and North Carolina and had offers from top programs such as Alabama, Auburn and Michigan among the more than 30 he had. But by late July, he had honed in on his choice, and made it official with his nationally-broadcast announcement to verbally commit to the Tar Heels and play for Mack Brown, who has the program on the rise in the top-25 of the national rankings.

He found all of those with North Carolina, and key in that recruitment was Dré Bly, a Tar Heels assistant coach from Chesapeake who led the school’s recruitment.

“He’s a funny dude,” Pettaway said. “He’s from the 757, so he’s done it here. We just had a great relationship off the field, just being able to talk about whatever. He always keeps it honest with me.”

Pettaway has also connected with a five-star recruit in Carolina sophomore Tony Grimes out of Princess Anne High School in Virginia Beach. The two of them would work out together when Grimes was back in the 757 area. Grimes’ father, Deon Glover, was decked out in Carolina gear in the NSA gym.

Glover praised Pettaway’s family, and then Pettaway himself for his character and integrity.

But Pettaway’s talent on the field led to competition to land the Saints’ star.

In an abbreviated four-game season in late February and early March, in which NSA went 3-1, Pettaway rushed for 714 yards and 14 touchdowns, averaging 13.7 yards per carry. He added another 111 yards receiving on just six catches and scored two more touchdowns.

This fall, in his senior year, the Saints are 3-1 thus far, and he has rushed for 749 yards and 11 touchdowns, with a long of 86 yards, averaging 17.4 yards per carry. He has eight catches for 203 yards and another pair of touchdowns.

Pettaway used the time during the coronavirus pandemic to work out with Giavanni Ruffin of TNDO Gym, crediting him with getting him ready for the next level. TNDO is short for “take no days off,” and if Pettaway took any, it would be hard to tell.

“I believe in fate and things happening for a reason, and I think when COVID hit, there was a perfect opportunity for George to meet the right people that were going to send him on this path. And almost at the same time that everything was shutting down, George got the opportunity to go to meet Giavanni and started working out at TNDO.

Pettaway, who had a slew of supporters among NSA faculty, staff, students and coaches, credited the school with helping him become the person he is.

“NSA has taught me a lot,” Pettaway said. “I feel like it taught me a lot, just off the field, being a better person. As far as football-wise, Coach Biehl, him and his staff have gotten me competing every single day, holding me accountable.”

He said managing school and recruiting through COVID-19 wasn’t difficult because it allowed him to focus on virtual school and then get his workouts in.

“It was easy for me because there was not a lot to do,” Pettaway said. “COVID was inside (school), so it’s either, I’m going to lay around all day, or I’m going to get better, and compete and work to be where I want to be at, and I feel like when COVID hit, it felt like it was a perfect opportunity with online school, take care of my education and then just pretty much work out and train and get better, get some good rest and some good sleep and we’re good.”

That focus in the classroom and on the field has endeared Pettaway to those at the school — his friends, his teammates, his teachers and coaches.

Biehl said Pettaway will always have a home at NSA. He’ll always be a Saint.

“The things I tell people about you, George, is that your vision is great, your work ethic is great, your ability to compete is great, it’s at another level,” Biehl said. “But what I’m more excited about is who you’re becoming as a person, ‘cause what you’re showing is that anybody with the right amount of talent can take that talent and do what they want to do with it, if they’re willing to do the work.

“But what hasn’t changed is you as a person, and what you’re showing a lot of other people that you don’t even know that you’re affecting is that they can do it too, and you’re showing them the path.”

Now Pettaway, who deliberately scheduled his college announcement during a bye week for the Saints to not make himself a distraction for the team, is geared up to help them finish strong and set the stage for a promising future for the Tar Heels. He said Mack Brown, a 43-year veteran of college coaching and in his second stint at North Carolina, is a genius when it comes to football and gets the ball into the hands of his playmakers.

It won’t be long before he expects to don the Carolina blue and tear up the field at Kenan Memorial Stadium. Until then, he’s got some unfinished business on NSA’s Arthur E. Jones Athletic Field.

Pettaway said he’s always had visions of playing college football from the time he began playing with the Smithfield Packers.

“To do it here, where I’ve basically been to school my whole life, and all the work I’ve been put through,” Pettaway said, “it’s like a dream come true.”