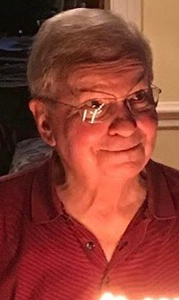 John Thomas Dowd, born June 14, 1937, in Plainfield, New Jersey, and a resident of Suffolk for many years, passed away peacefully on Friday, Sept. 24, at the age of 84. He was at home and surrounded by loved ones as he journeyed to his Heavenly reward.

“Papa Duke,” as his eight grandchildren affectionately knew him, touched many lives as a husband, father, father-in-law, grandfather and friend. He was a man of extraordinary principle, and those who knew him well invariably recognized his great character. His ability to cut to the heart of an issue was legendary. A quieter but more central part of his character was his boundless generosity, which benefited many of his family and friends, particularly in their hour of need. His sense of humor brightened every room and never left him. John served four years in the Air Force after college, followed by a long career as a project manager, executive and consultant, the majority of which was with Wheelabrator Technologies. After retiring from the business world, he was elected chairman of the Republican Party in New Hampshire and contributed to a very successful 2002 election. His tenacity and determination were well-known in each of these endeavors, and even more evident throughout his battle with ALS over the last six years. He became an inspiration to all he met as he fought the disease with patience, endurance, humor, and, above all, grace. He was a long-time communicant at St. Theresa’s Church in Rye Beach, New Hampshire, where he lived for 35 years. He sang in the choir and served as lector, Eucharistic Minister, and member of the Finance Council. In 1987, he co-founded New Generation, a shelter for homeless expectant mothers in Greenland, New Hampshire. For 10 years, John was a parishioner at St. Mary’s of the Presentation Church in Suffolk, where he was a lector, Eucharistic Minister, and directed RCIA along with his wife.

John’s most cherished career was that of husband, father and grandfather. He is survived by his wife of 50 years, Agatha Schmidt Dowd; four sons and daughters-in-law and eight grandchildren: Christopher Dowd and Cynthia Corliss and their children Noah, Eli, Simon, Nathan and Paige; John and Gina Haschke Dowd and their daughter Tessa; Matthew and Megan Dowd and their sons Shane and Luke; and Patrick Dowd and Blazhia Parker. He was predeceased by his sister, Maryann Cutlip, and is survived by four siblings: Patricia Groeninger, of Charlottesville; Kenneth Dowd, of Charlotte, North Carolina; James Dowd, of Marriottsville; and Katherine Savage, of Rockville, Maryland.

In lieu of flowers, memorial donations may be made in his honor to New Generation (P.O. Box 676, Greenland, NH 03840, www.newgennh.org). A Mass of Christian Burial will be held at 10 a.m. Saturday, Oct. 2, at St. Jude Catholic Church in Franklin (the family respectfully requests face masks be worn). An outdoor reception will immediately follow at the King’s Fork Community Pavilion (5125 Kings Fork Circle, Suffolk, VA 23434). R.W. Baker is serving the family. Online condolences may be registered online at RWBakerFH.com.