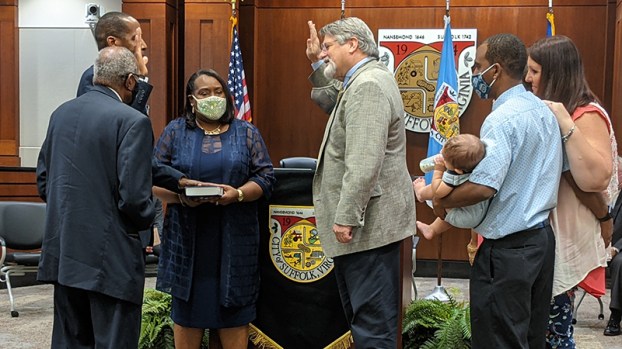 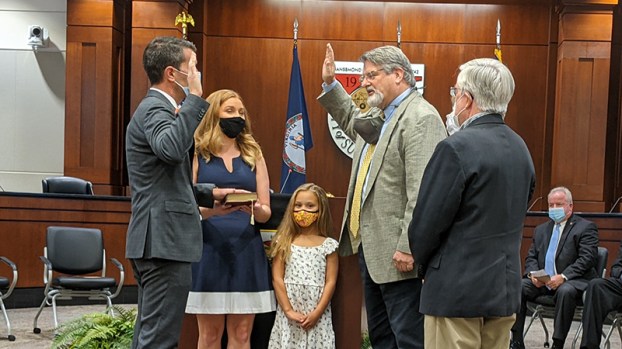 Deputy city managers Azeez Felder and Kevin Hughes were formally sworn in Tuesday during an oath of office ceremony at City Hall.

City Manager Al Moor said during the ceremony that he knew he wanted both of them as part of his team from the time he was appointed interim city manager exactly one year ago.

“It’s their abilities and their talents that drove me to wanting to be with them and having them with me on this trip,” Moor said. “They complement my experiences, they fill voids where I have those and there was no doubt in my mind who I wanted at that time.

Moor said he first met Hughes in 2005, and from that time, has sought his insight and had many conversations about economic development. The city manager said he has admired Hughes’ foresight and ease of public speaking.

“And we had many meetings talking about things — on the second floor, by the water fountain, across from the men’s room,” Moor said to laughter. “People thought we had rented that space.”

Hughes will focus on economic development and capital initiatives in his duties as deputy city manager. When he came to Suffolk as an economic development manager in 2005, he had a choice of coming to the city or a neighboring locality. Having worked with a regional group before that, he saw coming to the city as a unique opportunity to learn and “work with a diverse group of projects, developments and people,” and they have exceeded his expectations.

“I guess I didn’t screw it up, because I’m here today,” Hughes said to laughter, “and we’re removing the term, interim. I’m not really much for pomp and circumstance. However, it’s not lost on me that this is a significant moment.”

Moor met Felder about eight years ago when Felder was beginning his tenure as director of the Suffolk Department of Social Services. The city manager quipped that Felder “had the misfortune” of sitting next to him at senior staff meetings because he had the penchant for getting anyone in trouble.

He noted that Felder started college at 16 and earned a master’s degree by age 22 recently joking with Councilman Donald Goldberg that they wouldn’t compare their own academic credentials against Felder’s.

“He brings a social services background to the city manager’s office,” Moor said, “which I think compliments the whole office along with my experiences.”

Felder, who was initially appointed as acting chief of staff effective Jan. 1 before the position was reclassified July 7 by City Council as deputy city manager, will focus on city services, their delivery and support initiatives.

In his remarks, he outlined his journey from New York to Suffolk while thanking Moor, city staff and his family for their support, “because I’m wise enough to know that I did not get here all by myself.” Felder often had those who assembled in City Hall laughing at his remarks.

“First and foremost, I’m truly grateful to God and I’m humbled by this opportunity to both serve and to lead in this new capacity,” Felder said, “because whatever title we may have in the public or private sector, please believe me, if you’re going to do it right, it entails service to others in the spirit of excellence and serving others to the best of our abilities.”