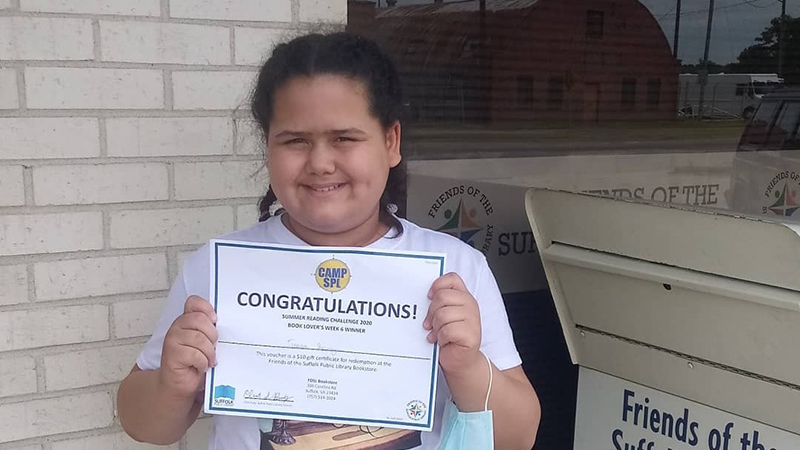 Teresa Sperry loved unicorns and rainbows, and she was a diva in the best possible sense.

She loved to perform, and whether it was songs from “Frozen II” or “The Nightmare Before Christmas,” from Billie Eilish or random songs she and her mother, Nicole Sperry, would sing together, it hardly mattered, as long as she was singing.

And Teresa had just gotten into makeup — getting her first set just weeks ago — and loved accessories, loved purses and was known for taking her mother’s high heels and wearing them. The personalities of mother and daughter were just alike.

“She came out looking like me,” Nicole Sperry said. “My boys, when they were born, you couldn’t even tell that I was their mother. And when you looked at her, it was like looking at a reflection.”

And that reflection only grew more similar as Teresa got older, up until the moment she died of COVID-19 Sept. 27 at Children’s Hospital of the King’s Daughters in Norfolk.

As the saying goes, Teresa had a maturity beyond her years.

Though at times stubborn and strong-willed, she was a caring soul who always had a friend.

A neighbor of theirs told Nicole that she would see Teresa walking down the street, and the young girl would stop, wave and say hello.

Many times at the grocery store, Teresa would randomly compliment people on their outfits or their hair.

“If someone was hurt, she would make sure they felt better,” Nicole said. “She just had a real, genuine compassionate, caring heart.”

She would never tell her family she didn’t like a meal, even if she truly didn’t like it.

She kept friends throughout her brief life that she knew from pre-kindergarten and kindergarten. Teresa and one of those friends, a couple of years ago when they were both in the third grade, talked regularly about moving to New York and getting an apartment together when they graduated high school.

“She was anything that anybody would ever hope for a friend,” Nicole said. “She was that person.”

So when the Suffolk School Board approved the return to school plan allowing for students to attend in person five days per week, she was excited to return to Hillpoint Elementary to start the fifth grade, even as positivity rates for COVID-19 in the city hovered at around 14%.

“She hated having to be virtual,” Nicole said, “because she wasn’t able to interact with her friends. She really missed them.”

She would talk often about how much she missed specific people.

“She never wanted to complain about anything, but she enjoyed school,” Nicole said. “She loved it.”

And Teresa was thriving.

“That’s one of the reasons for having them go back in person,” Nicole said of Teresa and her other children, “because it was tough, and she was doing great, and she would come home every day and just saying that, ‘I did this, and I did that.’ She never wanted to complain about anything, but she enjoyed school. She loved it.”

Her father, Jeff, would take her to and from school every day, not wanting to add any additional risk of getting COVID-19 by having her on a bus. And on that day, when he picked her up, Teresa complained of having a bad headache.

Because both Nicole and her own mother have migraines, and her oldest son gets bad headaches, they didn’t think too much of it.

They thought Teresa might not have gotten enough sleep the night before, or her class that day was louder than normal. They gave her some medicine and she spent the rest of the day sitting around the house.

That was on a Wednesday.

The following day, Teresa went back to Hillpoint without a headache, and did not have a fever. But again, when Jeff picked up his daughter, something was amiss.

When she got home, she went to her room and fell asleep, waking up later that evening with a 102-degree fever.

At that point, her parents decided to keep Teresa and their son Michael home from school the next day.

Nicole, a third-grade teacher in Chesapeake, went back to work while her husband made phone calls to the nurses at both Hillpoint and at their boys’ high school. Because her sons had been vaccinated, as she and Jeff had, they were told the boys could return to school.

He also called Teresa’s pediatrician at Suffolk Pediatrics, and they thought she had gotten COVID-19, but they weren’t yet sure. He had told them of her symptoms Sept. 23 — the fever and fatigue she had. They then asked about any prior symptoms, and so he mentioned her headache the previous day.

Instead of doing a rapid test for COVID-19 — Nicole said they didn’t do that because the results were not always reliable — her pediatrician scheduled her for an 8 a.m. appointment Sept. 27 to get a PCR test, saying they needed to wait five consecutive days from the onset of symptoms.

In the meantime, they were told to quarantine Teresa, make sure she had plenty of fluids and give her Tylenol for her fever.

She spent that Friday and Saturday in her room, using her father’s cellphone to video chat, call or message if she needed anything, and if they went into her room, they were sure to wear masks.

She started complaining of a sore throat later that Saturday, and she was still sleeping a lot, and by Sunday evening, Sept. 26, Teresa began coughing to the point of throwing up, and Nicole took her daughter to the emergency room, though Jeff couldn’t go because he had also begun experiencing COVID-19 symptoms.

Not able to find Teresa’s shoes, Nicole gave her daughter a pair of hers, though they were a couple of sizes too big.

At Sentara Obici Hospital, Teresa was tested for both strep throat — negative — and for COVID-19. They learned by midday Monday, Sept. 27, that she was positive.

X-rays showed that her lungs were clear, and there were no signs of COVID pneumonia.

With no indication of Teresa being at severe risk, she went back home to quarantine.

Later Sunday evening, Teresa began to have difficulty breathing, sounding wheezy and couldn’t stay asleep, so Jeff stayed up the night with her.

Monday morning, Nicole went into work so she could prepare her class to have a substitute teacher for the rest of the week so she could stay home.

Teresa had finally fallen asleep around 5 a.m., and they checked with Suffolk Pediatrics to determine whether they still wanted her to come in.

Since she had already been COVID-tested at Obici and she had a rough night, they recommended she rest.

The lunch block for Nicole’s class was from 11:55 a.m. to 12:25 p.m. Her son, Michael, who had also stayed home, video called his mother to tell her that Teresa had tested positive for COVID-19. At that time, Nicole could hear her husband talking to the person who gave them the result and arranging for virtual care.

She had planned to pick up more sanitizers and gloves, and by 12:25 she was getting her students from the cafeteria when her son video called her repeatedly, but she didn’t pick up at first, thinking he was calling to be silly.

When Nicole did call back from the bathroom of her school, she told her son it wasn’t a good time for him to call.

Nicole ran back to her class, grabbed her purse with her car keys inside, yelling, “I’m on my way. I’m on my way.”

Others in her school found someone to cover her class, and another person ran after her to drive her instead of Nicole driving her own car, which was low on gas.

The drive from Chesapeake to Suffolk was a blur, and she met Teresa at Obici, and then met her at CHKD in Norfolk when she was transferred there.

At CHKD, Nicole found her way to where doctors were treating Teresa, seeing familiar faces from Obici. They took her to the quiet room while her daughter was getting hooked up again to the ventilator.

She didn’t know what time it was at that point. At one point, she was told that it wasn’t looking good for Teresa, that doctors had lost her pulse.

“They were trying to get her heart back,” Nicole said.

She was there for her daughter’s last moments.

Having done all they could, the doctors began leaving the room.

“I just felt so hopeless then,” Nicole said.

She would sit with Teresa, cleaning her face.

“She was the kindest person ever,” Nicole said. “She didn’t deserve this. She did everything she could. She always wore her mask the right way, and if anything could change, we’d just want more people to take it serious, wear their mask, get vaccinated if they can. Simple things like that.”

At CHKD, they made five handprints of Teresa’s right hand — enough for her mom, dad and brothers — leaving room for them to put their left handprints next to hers.

And they wrapped her in a blanket.

A blanket with rainbows.

An account has been set up to help the Sperry family with funeral and other expenses at https://paypal.me/pools/c/8Dj2XrBC3r, while a meal train has been established for the family also, at https://www.mealtrain.com/trains/yv3v21.