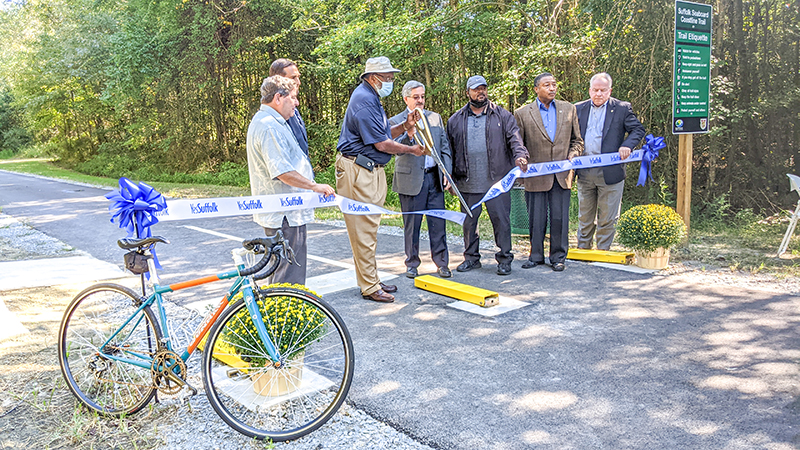 Mayor Mike Duman, along with other members of City Council, Parks and Recreation Director Mark Furlo and City Manager Al Moor, cut the ribbon on Segment II of the Seaboard Coastline Trail Sept. 30.

Helen Gabriel was as excited as anyone for the formal opening of the second segment of the Seaboard Coastline Trail.

As its project manager and the assistant director for Suffolk Parks and Recreation, Gabriel was animated when talking about the benefits and features of the trail, using her own bicycle to demonstrate the pumping and bike fixing station for the 1.5-mile paved segment that winds from Suburban Drive to Nansemond Parkway.

Gabriel, who was tasked with creating the master plan for the trail, figures to log at least some of the 150 miles that she rides per week on the trail, which has already been a focal point for bike riders, walkers and runners, rollerbladers and nature lovers. She has logged about 10,000 miles in five years on the bicycle she brought with her to the Sept. 30 ribbon cutting.

“That’s exactly what this is for … that you can ride as a family and not worry about a tractor-trailer coming behind you, all the distracted driving,” said Gabriel, who was also the project manager for the second segment of the trail. “This is very, very safe.”

The 10-foot wide, fully paved and Americans with Disabilities Act-accessible Segment II of the trail has been open since May, with officials highlighting how it will not only connect different parts of the city, but also link what will be the city’s 11.1-mile trail network — eventually — to the 41-mile South Hampton Roads Trail, a regional network that will extend from the Suffolk Seaboard Station Railroad Museum to the Virginia Beach oceanfront. The city has built about five miles of the trail to date.

The South Hampton Roads Trail is envisioned to eventually be a part of a roughly 190-mile Birthplace of America Trail, linking it to the already-completed 51.7-mile Virginia Capital Trail — extending from Richmond into Henrico County, Charles City County, and James City County in the Jamestown area.

Segment II, which took about eight months to complete and was built along the former Seaboard Coastline Rail Corridor, also connects to neighborhoods such as Patriots Walke and Olde Mill Creek, and it’s part of a multi-phase master plan to connect downtown Suffolk with Chesapeake.

Parks and Recreation Director Mark Furlo noted that most of Segment II’s cost — just under $1 million — was paid for through grant money the city received. He said other segments would be paid for similarly, and is a great example of regionalism at work. Furlo noted the partnership with the city’s Department of Public Works in completing the segment.

“We’re not stopping here,” Furlo said. “Once we cut the ribbon here today, we’ve also got funding already lined up for Segment III-A, which will go from the Driver trail to Nansemond River High School, and Segment I, which will go from here, from Suburban Drive all the way and connect up with the railway museum.”

He said those pieces are already in place, and the city will submit an application in the next month for grant money to perform work for Segment III-B, which will extend from an end point of Segment II at Nansemond Parkway to Nansemond River High School.

“We’re really excited,” Furlo said. “We’ve got a lot of the funding in place to continue building, and once we’re done with that, we’ve got plans to take this out west, out toward Lakeland High School.”

Furlo credited Gabriel for her efforts over nearly 20 years to see the Seaboard Coastline Trail project to fruition.

“She’s been the real driving force,” Furlo said, “in making this trail developed.”