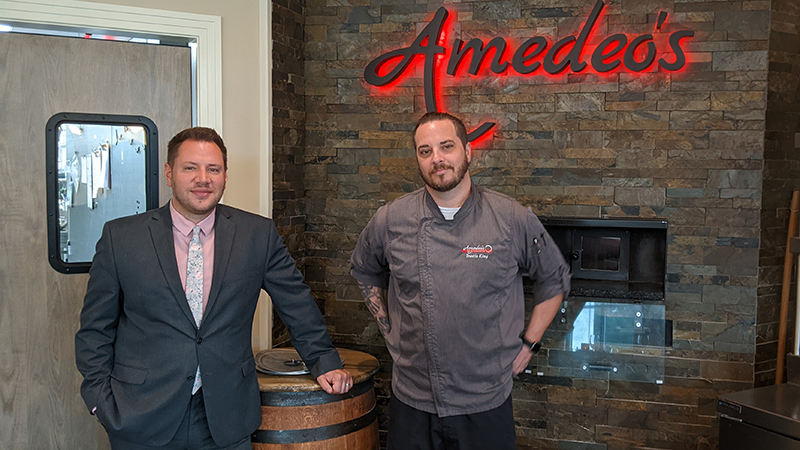 Ryan Creel, left, manager of Amedeo’s Ristorante, with executive chef Travis King in September. The Italian restaurant in North Suffolk has been open about six months and is named after Amedeo Obici. David Speight (not shown) is the general manager and Ken Dodd (not shown) is a partner and director of operations.

You wouldn’t expect to find an authentic taste of Italy in a generic mixed-use development in the busy Bridge Road area of North Suffolk.

But there’s nothing generic about Amedeo’s Ristorante, which has seen a steady uptick in patrons since it opened in late spring in the Bridgeport development — a mix of businesses and apartments.

Amedeo’s is a tribute to one of the more iconic people to have lived in Suffolk, Amedeo Obici. From the food to the decor and the ambiance, the design is to give people an expanded taste of traditional northern Italian cuisine while learning more about the man who had an indelible impact in Suffolk and inspired Brian and Teresa Mullins to create a fine dining experience in what is becoming a burgeoning restaurant empire.

It’s their first venture in which they haven’t owned the building, but he designs how he wants it to look, and then his wife handles the decorating aspect.

“We enjoy building and owning our own restaurants,” Brian Mullins said. “And you can’t just build something. It’s like a kid; you’ve got to bring it along. … You’ve got to let it morph into something.”

Due to dietary restrictions, Brian Mullins doesn’t eat much at any of his restaurants — maybe once a month.

“It doesn’t mean I’m not interested in people,” he said, “and people enjoy this. You don’t have to know the food, if you can rely on people. My father told me, ‘Hire people smarter than you and then don’t micromanage them,’ and, that’s the hard part, but it works.”

In the past six months, Amedeo’s has seen a steady increase in business without publicizing too much, and it expects cooler fall and winter weather to heat up business in the restaurant as people seek out heartier fare. It’s exceeded expectations, along with Amedeo’s Bakery, which it opened next door.

And while it started off with a limited menu and staffing, and holding to realistic expectations, Amedeo’s has ramped up both things.

“We were relatively, I wouldn’t say pessimistic — we were realistic as far as what we could expect,” said director of operations for M&M Hospitality Group Ken Dodd. “It’s exceeded our expectations, and we’re getting busier and busier every day. And I really do believe our real season is in the fall and winter.”

The restaurant has touches that come straight from Amedeo Obici, from the photographs on the walls to the artwork and decor throughout the restaurant. Some of the photos had not been seen anywhere in the city until Amedeo’s opened, and more than 200 can be seen on the restaurant’s website, amedeos.com.

“Those two things, between art and wine, has made this a step above other restaurants,” said Tom Powell, president and founder of The Addison Group, which handles marketing for the restaurant.

And Amedeo’s is a way to pay tribute to the legacy of its namesake, noting what he gave back to the community.

“Being in restaurants, we rely on the community,” Dodd said. “We’ve always been very thankful for the people that come into our restaurants every single day. … It was kind of an homage to Mr. Obici and what he was able to do with this. It is our local tie, and every one of our restaurants, as you see, we pull in some of the local community.”

Brian Mullins said they did a lot of research and development in putting together the menu and decor, which is a fusion of old and new.

But all of that would not mean so much without a top chef to prepare the cuisine, and the Mullinses believe they have that in executive chef Travis King.

King, a classically trained chef, gives the restaurant instant credibility in being able to prepare the food inspired by Obici’s birthplace in Oderzo, in the Venetian plain, but he also has to ease people into the rich, Italian palette.

“We have to have some things that people easily recognize,” Dodd said. “We don’t ever want to look down our nose at what people don’t know. We want to educate people to what they might not have already learned at an Olive Garden or something like that, because people are expecting New York-style or Chicago-style Italian food when they go into an Italian restaurant.

“And so, do we have lasagna? Yes, of course we do. And lasagna is a popular dish throughout Italy. But is it the most popular? No. But it is recognizable to our guests, so we’ve had to make some concessions as far as that, but we’ve tried to stay true to our Venetian, our northern Italian roots.”

He said it is about earning their trust and then expanding upon it, and the restaurant starts by making its own pasta and having recognizable staples of an Italian restaurant in the United States, while also easing people into the truly authentic fare people would get if they were dining in Oderzo.

King appreciates the freedom to create a menu that caters to the novice and experienced Italian eater, while also being able to pick out such things as silverware and placemats.
“Not many restaurant groups give the chef that much freedom and allowance to have their touch on literally every place setting along with every menu setting,” King said, “so it’s fantastic.”

The Mullinses have allowed those working for them, including King, to have a voice and freedom to implement what they feel is best for the restaurant.

“From good to great is all about details,” King said.

Brian Mullins, in answering why he put Amedeo’s where he did, said matter-of-factly: “Because there’s not one right here. There wasn’t one, and now there is.”

He noted the growing and helpful community in getting the restaurant off the ground. At the end of the day, they’re trying to earn the trust of diners wanting an authentically Italian experience.

“We have to be approachable at the end of the day,” Dodd said. “I’ve always believed that.”