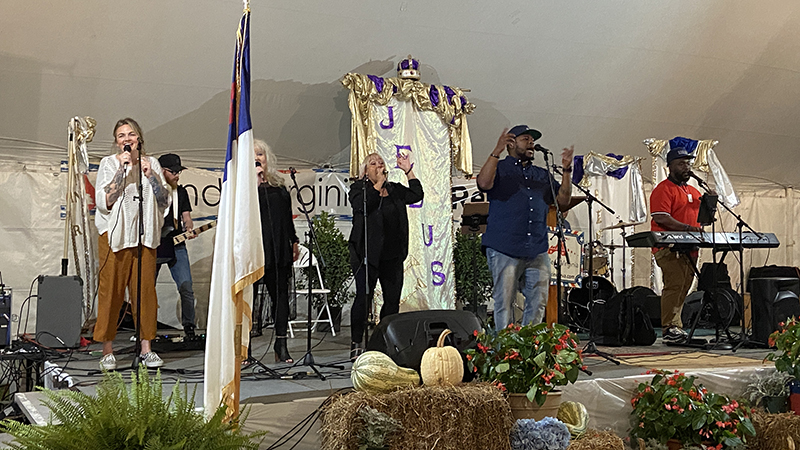 Christians from across Hampton Roads gathered in Suffolk this weekend to pray for a revival and restoration in hearts across the country.

Churches and organizations in Suffolk and surrounding areas came together to host the Rekindle Virginia Tent Revival, a three-night event at Bennett’s Creek Park. The three nights focused on rekindling a love for America and Jesus Christ, reviving churches and healing in the church.

The music and speakers for the weekend focused on unity among all people groups, especially in the church. The first night, Chief Anne Richardson of the Rappahannock Indian Tribe spoke. As the weekend discussed the importance of racial and ethnic unity among Christians, Richardson gave a perspective from American Indians.

“It’s exciting to be part of a new thing God is doing,” she said.

Other speakers during the weekend included Bishop E.W. Jackson of The Called Church in Chesapeake, Bishop Leon Benjamin of New Life Church in Richmond and Dr. Peter McLewin of Ingleside International Church in Norfolk. After the speaker each night, there was a time of invitation and healing.

“God is calling us together as a church to love him and worship him,” said Scottie Marshal, who traveled from Newport News. “Suffolk is a great place to do it. Wouldn’t miss it.”

Worship was led each night by Joseph Stallings and his team from IMPACT Church’s South Campus in Chesapeake. The weekend had special musical performances from individuals and groups from local churches.

Dot Dalton started this event as she has done extensive research on revivals in America and is the founder of Impact Suffolk. Her new book, “Rekindle Virginia: The Flames of Revival,” sparked the idea and discussed the history of Virginia and the revivals that started in the state and spread across the country. Each night, Dalton shared with those attending about the significance of holding another revival in Virginia.

“God brought mighty revivals through the Second Great Awakening in America, which was in Virginia between 1740 and 1790,” said Dalton. “He did it once, He can do it again.”

The prayer for the weekend was that God would make Virginia the center of revival again. Many attended in hopes of a third Great Awakening that would heal and unify this country.

“America needs this change,” said Kathy Russell, one of the volunteers. “The Great Awakening started in this area. It’s about rekindling hearts for the Lord. We always hear about bad things going on. It’s time to hear about something good.”