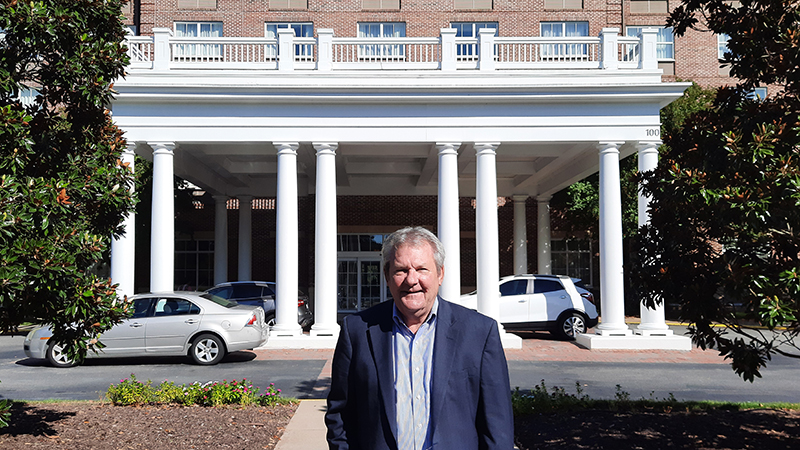 The new general manager of the Hilton Garden Inn Suffolk Riverfront & Suffolk Conference Center comes to downtown Suffolk after more than 30 years of experience with the Hilton brand.

Kevin Wolfe, a Richmond native, took over management of the hotel and conference center earlier this year with the departure of longtime manager Brian Williams.

“I’m happy to be here,” Wolfe said. “It’s a great company, I’m happy to work for them, and I’m really proud of our team. We built up our staff in the last couple months, and we’re really happy to be back.”

Wolfe said he gravitated toward hospitality from the beginning of his career, getting his start in the restaurant industry and bartending and then moving into management.

Wolfe likes to tell people that he and his wife, Courtney, left Virginia as a newly married couple in the late ’90s and returned home with three children. In 2005, the Wolfe family came back to Virginia and settled in Suffolk as he became part of the leadership team that opened the Embassy Suites Hotel and Hampton Roads Convention Center in Hampton.

Those three children, all young men, are Thomas, now a junior at Nansemond River High School; Sam, a freshman at Clemson University in South Carolina; and Jack, a junior at Virginia Commonwealth University.

Wolfe said his favorite part about his job is the people.

As general manager, that means Wolfe is in charge of everything at the hotel, but he certainly doesn’t do it alone.

Wolfe said the COVID-19 pandemic was hard on the hospitality industry, and it’s still coming back. While the hotel business at Hilton Garden Inn Suffolk Riverfront never closed completely, the restaurant did close, and conventions and events have been severely curtailed since March 2020. Now that some of the industry is coming back, supply chain issues for items like linens are becoming a problem.

“This has been the biggest single shift ever,” he said of the pandemic in relation to his career. “But I think this part of Virginia has really weathered the storm a lot better than New York or Baltimore, and other big cities with the really big hotels.”

Overall, Wolfe said he is happy to be managing the Hilton.

“I was thrilled to have the opportunity to work in this beautiful property here,” he said.