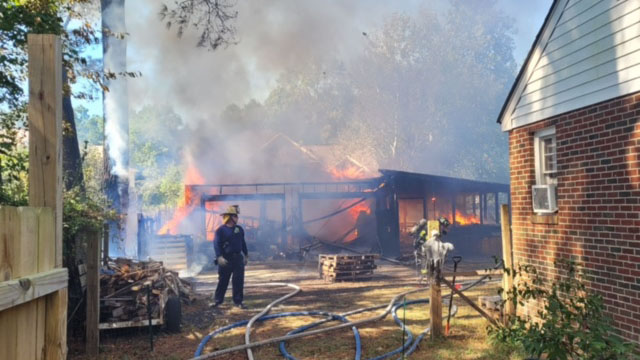 A garage was heavily damaged during a fire on Sunday afternoon.

The fire was reported at 12:57 p.m., according to a city press release. Suffolk Fire & Rescue responded to the report in the 1400 block of Nansemond Parkway and arrived at 1:03 p.m.

Engine 3, Ladder 3, and Medic 3 arrived to find a large, two-car, detached garage on fire in the backyard of the residence, the press release stated. Suffolk Fire & Rescue units placed three lines into service and was able to prevent the fire from spreading to nearby structures.

The large detached garage sustained heavy fire damage. The main residence sustained heat damage from the garage fire. The fire was under control at 1:20 p.m. No one was displaced by the fire, and there were no injuries to firefighters or civilians.

The fire remains under investigation by the Suffolk Fire Marshal’s Office.