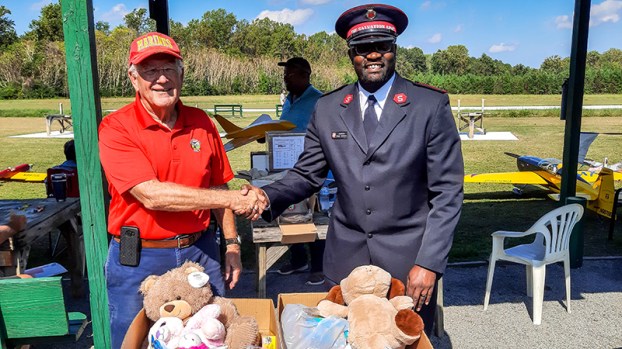 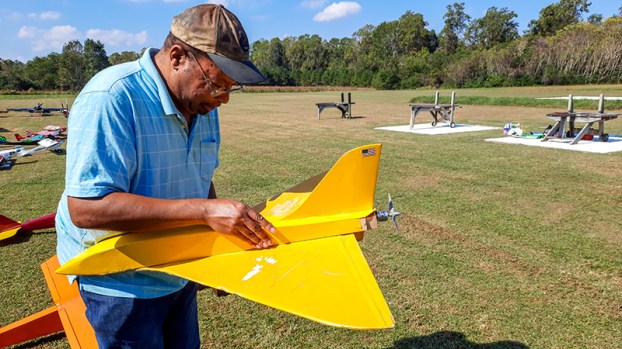 Robert Edmonds Jr. prepares his plane for flying at the Fun Fly on Oct. 16. 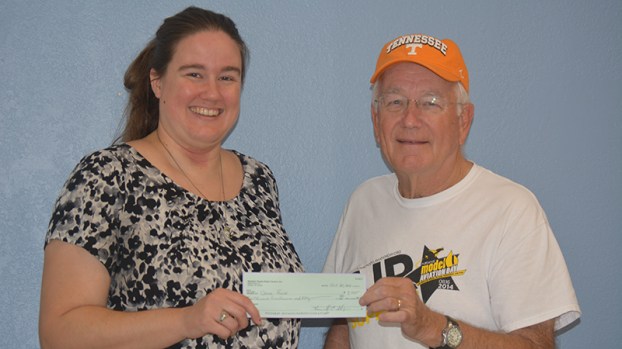 Planes buzzed overhead and people laughed and talked and ate while raising money for the Cheer Fund and Toys for Tots on Oct. 16.

The Hampton Roads Radio Control Club’s Fun Fly returned for another installment after a two-year hiatus. The event has taken place off and on for about 14 years.

More than 100 people were on site — 36 of them registered radio control pilots. There were three candy drops for kids, aerial combat, demonstration flying of radio control planes and helicopters, and even a parachute landing by skydivers from Skydive Suffolk.

The pilots could pay $10 or bring a toy worth $10 as their “landing fee,” which gave them permission to fly for the day. The club, which has close to 75 members, donated proceeds from landing fees, food donations and a raffle to the Suffolk News-Herald Cheer Fund. The toys brought for the landing fees were picked up by the Salvation Army for Toys for Tots.

The event traditionally has been held the first weekend in November, but the club decided to make it a few weeks earlier this year in hopes of better weather after several years’ events were cold and rainy. The weather cooperated this year, to the delight of everyone present.

“This is a really great turnout,” said Mills Staylor, president of the Hampton Roads Radio Control Club. “By moving it up, I think we gave ourselves a shot at having good weather.”

Club members talked about the joy of combining an enjoyable hobby with helping bring in funds and toys to help children at Christmastime.

Club member Doug Smith said the Cheer Fund and Toys for Tots are a good, worthy cause.

“In the last couple years, we have obviously gotten thrown off because of Covid and other things going on,” he said. “This year, we wanted to do something to get back into contributing to the community.”

Safety officer Charlie Smith said it is important to support causes that help provide toys for children at Christmastime. He got into the radio control hobby when he was only a child himself, flying planes in a circle on a wire when he was about 7 in the early 1960s. He later got into radio control with his father, and now his sons and grandsons are also in the hobby. They had a three-generation combat fly during the Oct. 16 event.

Robert Edmonds Jr. traveled all the way from Northern Virginia and said he enjoys the hobby because of the people as well as the technology.

“All these people are the kind of people that you like to be around, even if there weren’t any airplanes,” he said. “Put on top of that the Toys for Tots contribution, I say support as many as you can.”

Edmonds said the hobby, for him, is “a combination of machines and people” that you don’t get in every pastime.

Eagle Hobby Shop and Hobby Town provided raffle items for the event, and other sponsors included the UPS Store, Duke Automotive, W.F. Magann Corporation, Virginia Air Distributors and Skydive Suffolk. Once all was said and done, a total of $4,255 was raised for Cheer Fund, as well as two full boxes of toys for Toys for Tots.

Christmas may seem like a long way away, but donations to the Suffolk News-Herald Cheer Fund are accepted all year long.

To donate to the Cheer Fund, send a check to P.O. Box 1220, Suffolk, VA 23439 or bring it to the newspaper office, 157 N. Main St., from 9 a.m. to 5 p.m. Wednesday through Friday. We will list your donation in the newspaper, but it can be marked “anonymous” if you like. Donations may be made in honor of or in memory of someone. If you bring the check to our office, we’ll even take your picture as you hand it to one of our staff.