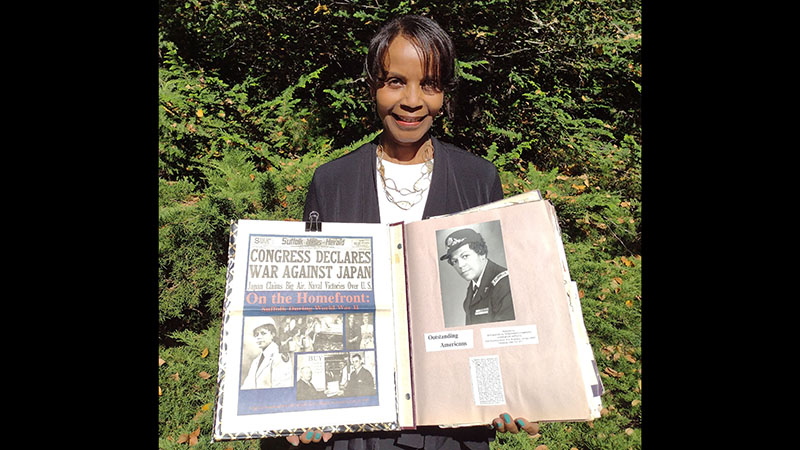 A piece of Suffolk will be on display at a major museum in Washington, D.C.

Maj. Della Hayden Raney Jackson was a Suffolk native who made history during her service in World War II. A scrapbook full of memories is headed to the Smithsonian National Museum of African American History and Culture in Washington.

Jackson served as a nurse in World War II and became the first Black nurse to reach the rank of captain before becoming a major. She served as chief nurse with the Tuskegee Airmen during the war and was stationed in Japan, California and Arizona.

She was born in Suffolk and grew up with her 12 siblings on Pine Street. During her accomplishments, one of her sisters kept a scrapbook of newspaper clippings and pictures. Once Jackson retired, they became co-owners of the scrapbook.

After Jackson died on Oct. 23, 1987, the family passed down the scrapbook through the siblings. After the youngest sibling died, the book went to his daughter, Thelma Raney. When Raney received the book, she knew it was too valuable to keep to herself.

“I reached out because I knew this was a treasure that did not belong in a box all these years,” said Raney.

After months of working through the submission process, the book was approved for the museum. Unfortunately, soon after, COVID-19 hit and closed the museum, which stopped taking physical donations. After a slow opening this summer, the museum started taking donations again and sent Raney the packing label at the start of the fall. The museum confirmed receipt of the book on Oct. 19.

“I was very choked up when the FedEx label came,” said Raney. “It’s such an amazing part of my family, and we are all so proud of her accomplishments. It was important to her to elevate in the profession of nursing and inspire other nurses of all races who came after her. It felt like a family member leaving. I know it’s the right thing to do. It’s important for others to learn about her career.”

The book has more than 130 items including pictures, newspaper clippings and pamphlets. Some of the notable items include various ribbons, a VHS of her funeral at Arlington National Cemetery and an autographed picture with William Wyler, who the government contracted to film parts of the war. Also included are panoramic photos of Jackson with groups of Black soldiers.

“This is probably the most important part of the scrapbook,” said Raney. “There are all these original photos and locations and information they can glean to put together what it was like for African Americans in World War II.”

The Smithsonian National Museum of African American History and Culture has a process of digitizing the contents and then deciding if it will be part of a certain exhibition. Whenever the book is ready for viewing, folks will find it in the military history section.