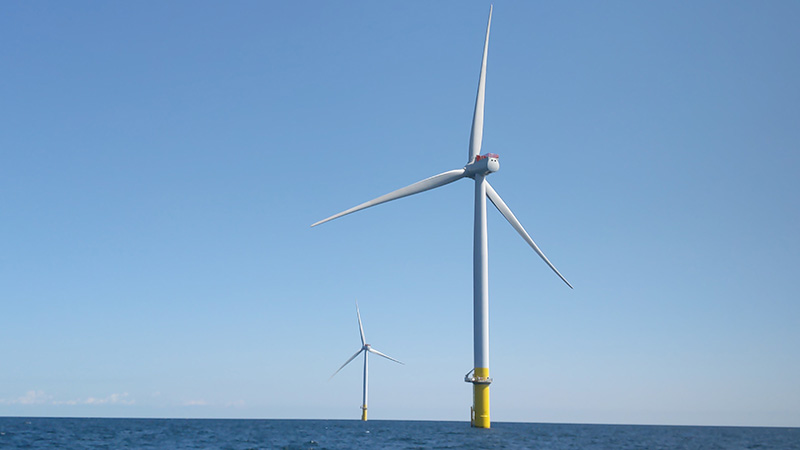 Gov. Ralph Northam and Siemens Gamesa announced Oct. 25 that the company will invest $200 million to manufacture blades at Portsmouth Marine terminal. The blades will go onto the 180 wind turbines that will be installed 27 to 42 miles off the coast of Virginia Beach by 2026.

As Dominion Energy’s more than $8 billion effort to build 180 wind turbines anywhere from 27 to 42 miles off the Virginia Beach coast ramp up, the Port of Virginia’s 287-acre Portsmouth Marine Terminal will be a potential catalyst for economic growth and could generate its own renewable energy of manufacturing and economic activity.

The Oct. 25 announcement that Siemens Gamesa will develop more than 80 acres of the terminal and invest $200 million to manufacture the blades to go on the turbines will not only bring 310 jobs — 50 of which will be service jobs to support the project — but it will also position itself, the port and the surrounding Hampton Roads area for future growth as a maritime and renewable energy hub.

“Just as Pittsburgh became synonymous with America’s steel industry in an earlier era, and Silicon Valley is synonymous with advanced technology today, Hampton Roads can become synonymous not only with the maritime industry, but now with offshore wind,” said Dominion Energy CEO Robert Blue.

It will be the first facility of its kind in the United States and will initially be used to support the supply of the Spanish-German wind engineering company’s patented blades — it calls them IntegralBlades — which will be used for Dominion’s 2.6-gigawatt Coastal Virginia Offshore Wind Commercial Project. Its investment in the terminal includes more than $80 million toward buildings and equipment there. Siemens Gamesa’s head of Offshore North America Steve Dayney said the company is hopeful of producing blades for more wind turbine projects across the country, but it did not yet have a timetable for when it will have its terminal facility operational. He said all of its efforts have been concentrated toward reaching an agreement to base itself in Portsmouth.

“This facility represents another step to develop the Portsmouth Marine Terminal into an offshore wind hub that someday can support offshore wind projects up and down the East Coast,” Dayney said. “When operational, the facility will immediately become part of the next verse — supporting the delivery of the largest offshore wind project in the United States, the Coastal Virginia Offshore Wind Project.”

The Virginia Economic Development Partnership worked with the port, Dominion, Portsmouth, the Hampton Roads Alliance and the General Assembly’s Major Employment and Investment Project Approval Commission to bring Siemens Gamesa to Portsmouth Marine Terminal. The state will be supporting the project through $17.1 million in MEI-approved Virginia Public Building Authority bonds to support infrastructure improvements at the site and make required preparations to build the facility.

The blades for the turbines off the Virginia Beach coast will be 354 feet long and move at more than 200 mph. The company says the blades are designed to last at least 25 years, and it can build blades for up to 100 turbines yearly.

Gov. Ralph Northam, along with Secretary of Energy Jennifer Granholm, Blue and Dayney were among those at the terminal’s waterfront for the announcement, along with Reps. Bobby Scott and Elaine Luria.

“It’s not just that 300 people are going to be working here,” Granholm said. “This is symbolic for the entire nation. Offshore wind energy is going to create ripples of job creation spreading from Virginia across the country.”

Northam said Siemens Gamesa’s investment “puts us a vital step closer toward being a leader in offshore wind.”

Dominion, which had previously chosen Siemens Gamesa as the turbine supplier for the project, is leasing 72 acres at the terminal for 10 years to stage and pre-assemble the foundations and turbines. That is valued at $4.4 billion per year and includes the option for two five-year renewals. Its agreement with the port includes what has been described as significant upgrades to make sure the terminal can handle the weight of the large components needed to build the turbines.

Two Siemens Gamesa six-megawatt, 620-foot wind turbines off the Virginia Beach coast began generating power in late summer 2020, and they can power up to 3,000 homes. The Coastal Virginia project will be able to power 660,000 homes when it goes online.

Virginia and Danish offshore wind developer Ørsted also came to an agreement last year to have the company lease 1.7 acres at the terminal for offshore wind equipment and staging materials through at least 2026, with options to expand to an additional 40 acres. That agreement could be worth about $13 million in lease payments, with potential site upgrades worth more than $20 million.

Officials tout the roughly 1,100 direct and indirect jobs across Hampton Roads, and the nearly $210 million in economic activity once the turbines are operational, expected by late 2026. During the construction phase, the project is expected to generate $5 million in local and state taxes yearly and $11 million once the project is commissioned and operational.

State Secretary of Commerce Brian Ball touted the “accident of history” that there are no bridges to get in the way of bringing the turbine materials offshore for final assembly.

It is just one of the numerous advantages officials have noted about the port in its use as the center of the state and country’s buildup of offshore wind capability. Other advantages include land and technological capabilities, and the port dredging to a depth of 55 feet, which, when complete, would make the port the deepest in the U.S. by 2024.

President Joe Biden’s administration outlined a plan to develop offshore wind farms along much of the U.S. coastline, and eventually lease federal waters to wind power developers by 2025 off the east and west coasts, and the Gulf of Mexico. His administration has pledged to build 30,000 megawatts of offshore wind by 2030.

The state set a goal through last year’s Virginia Clean Economy Act of developing 5.2 gigawatts of offshore wind by 2034. Dominion’s project would produce about half that power, and the federal Bureau of Ocean and Energy Management is currently reviewing it.

Officials expect sizable economic impacts from the wind farm off of Virginia Beach, coupled with another wind farm planned off the coast of the Outer Banks in northeastern North Carolina that is also expected to impact the state, with landing cables coming through a substation in Virginia Beach’s Sandbridge area and having other connection points in the city.

And the projects will complement efforts in Chesapeake and Western Tidewater to expand the presence of solar farms as another renewable energy source as Dominion seeks to meet energy generation and zero-carbon electricity targets by 2045 as mandated in the act, as the state’s overall carbon emissions must be zero by 2050.

Northam said the state has been working diligently to put the foundation for offshore wind energy in place. To date, turbine components have been produced overseas. The development to build the blades for the turbines marks a shift for companies like Siemens Gamesa, which had said it needed to see a reliable pipeline of wind energy projects before it could commit resources in the United States.

When Dominion installed its first two wind turbines off the Virginia Beach coasts, it did not have a Jones Act-compliant vessel that was capable of bringing what it needed to the site, forcing it to operate from Canadian waters. It currently has a 472-foot, $500 million Jones Act vessel being built in Brownsville, Texas, that will be based in Hampton Roads, but will be used for this and other wind energy projects.

“Virginians want renewable energy, our employers want it and Virginia is delivering it,” Northam said. “The Commonwealth is joining these leading companies to create the most important clean energy partnership in the United States.

“This is good news for energy customers, the union workers who will bring this project to life and our business partners. Make no mistake: Virginia is building a new industry in renewable energy, with more new jobs to follow and that’s good news for our country.”