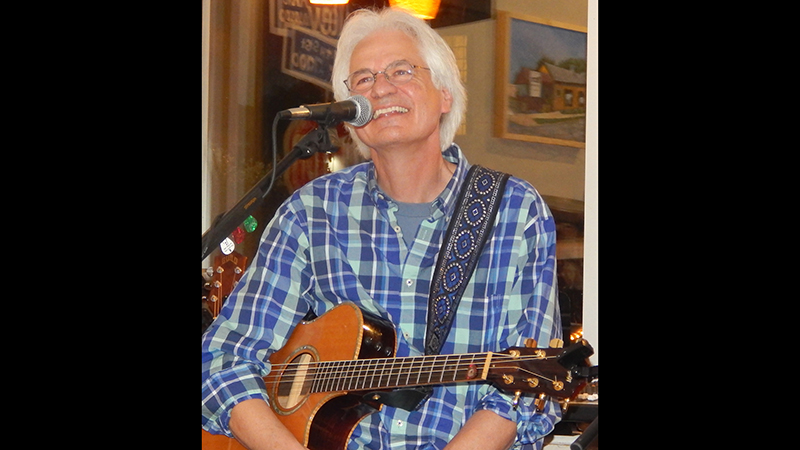 Jim Newsom and the Cloudless Sky are bringing their exciting eclectic musical mix to the Suffolk Center for Cultural Arts for a concert “Downstairs at the Center” at 6:30 p.m. this Saturday.

This concert will be a 50-year homecoming for the bandleader Jim Newsom, a 1970 graduate of Suffolk High School. Three decades later, he played a leadership role in the transformation of the school building into an art center, initially on an alumni advisory council, raising funds and garnering support for the endeavor, then as a member of the Suffolk Center’s Board of Directors when the Center opened its doors in 2006.

Newsom is an award-winning singer, songwriter and multi-instrumentalist who has recorded eight albums and is well known and highly regarded throughout southeastern Virginia. His band includes Gail Keller Smith on keyboards and Rick Jebavy on drums. Their concert repertoire draws primarily from Newsom’s catalog of original songs, particularly material from his most recent CDs, with a sprinkling of classic songs from the likes of Stevie Wonder, Paul Simon and Elton John.

The band’s latest album, “Peace Love Happiness,” is Newsom’s ninth album overall. Released in February 2021, the recording features 14 new originals written since his 2018 CD, “New Set of Dreams.” Unlike that recording, on which Newsom played all the instruments himself, “Peace Love Happiness” is a group effort recorded with social distancing measures in place during the depths of the pandemic.

Many of his songs reference his years growing up in Suffolk. In “Fender Rhodes Piano and a Jesus Handle,” he sings about the summer after his freshman year in college, working in a local factory making parts for peanut pickers during the day, practicing with his band at night in the choir room of St. Paul’s Episcopal Church. He shares happy teenage memories from the summer of 1969 in “A Mighty Cry,” remembers “the peanut farms that dot the land,” and recalls the “memory myth” of a “Leave It to Beaver” childhood in “New Set of Dreams.”

A professional musician for more than 40 years, Newsom has led rock, jazz and acoustic bands and played hundreds of solo dates throughout his career. He has recorded and released eight albums.

Norfolk native Gail Keller Smith began playing piano as a child, progressing through years of lessons and formal training to reach impressive heights of musicality. After taking nearly three decades off to raise a family and work a full-time job, she rekindled and returned to her first love of music. She joined forces with Newsom in January 2019. Drummer Rick Jebavy hails from Two Rivers, Wisconsin, but makes his home in Virginia Beach, where he settled via the U.S. Navy, in whose bands he performed for 27 years. He joined the Jim Newsom Quartet in 2004 and has been Jim’s drummer and percussionist ever since.

Jim Newsom and the Cloudless Sky are excited to come home to the Suffolk Center, a building that houses many happy memories, including varsity basketball, sports editor, Hi-Y and winning senior superlative for craziest student. The concert is “Downstairs at the Center,” which was once the Suffolk High School gymnasium. Instead of basketball rebounds, Jim Newsom and the Cloudless Sky will delight guests with a diverse mix of sounds, styles and lyrical topics that stands out above the crowded mass of contemporary musical conformity. The evening will have a night club vibe — creating the perfect date night or relaxed evening with friends. The Plaid Turnip restaurant will offer a variety of tapas and dessert options, and the center will have beers and wines available for purchase. As John Lennon sang many years ago, “A splendid time is guaranteed for all!”

Reserve your tickets to see Jim Newsom and the Cloudless Sky on Saturday. Purchase tickets for $17 by calling the Box Office at 757-923-2900, purchasing online at SuffolkCenter.org, or come in Suffolk Center for Cultural Arts, located at 110 W. Finney Ave., Suffolk, VA 23434.