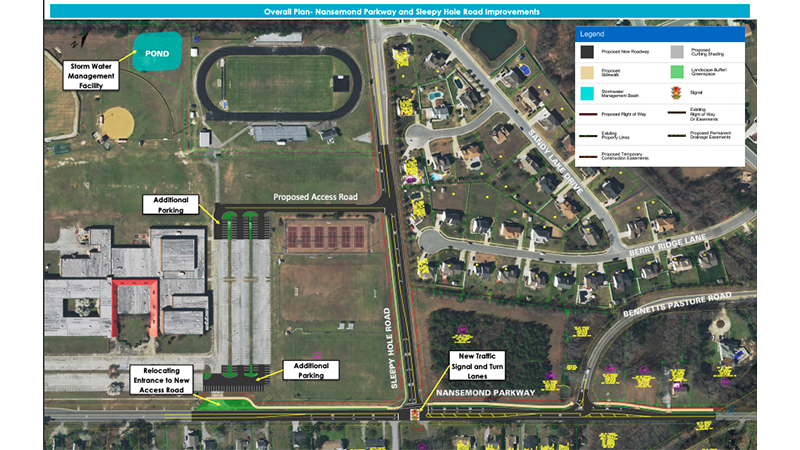 This graphic from the city of Suffolk outlines proposed improvements for the area of Nansemond Parkway near Nansemond River High School at Sleepy Hole and Bennetts Pasture roads. A public hearing on an ordinance that would authorize right of way acquisition for the project is scheduled for City Council’s Nov. 3 meeting, which begins at 6 p.m. at City Hall.

A public hearing will be held Nov. 3 on a proposed ordinance to allow the city to acquire needed property or easements for an intersection project that would impact Nansemond Parkway at Sleepy Hole and Bennetts Pasture roads.

The hearing will take place during City Council’s regular meeting, which begins at 6 p.m. in the council chamber at City Hall. Comments on the project can be submitted by Nov. 7 either in person or by mail, or they can be emailed to gmushett@suffolkva.us. For emails, people are asked to reference “Nansemond Parkway and Bennetts Pasture Road improvements” in the subject line.

A previous proposal would have provided for two or three traffic signals, and also would have split the property of two churches to reroute Bennetts Pasture Road to realign with Sportsman Boulevard.

That plan has been shelved in favor of one that removes the traffic signal in front of Nansemond River High School and closes off that entrance to the school, with a new entrance to be put in off of Sleepy Hole Road.

That signal had been installed following an accident involving a student, Lewis said, and was meant to be temporary.

Between 2015 and 2019, 73 accidents have been reported on the stretch of road between the high school and about 900 feet east of the intersection between Nansemond Parkway and Sportsman Boulevard, with 47 of them rear-end collisions, 11 others involving a vehicle leaving the road and 15 categorized as “other.”

Lewis said traffic coming out of the school onto Sleepy Hole Road would have more room to queue, allowing for up to 30 vehicles and providing for better traffic flow and allowing more vehicles to move in a shorter period of time.

The new plan also adds a stormwater retention pond on the school’s property near the stadium and about 90 parking spaces. It also would change the circulation of vehicles entering and exiting the parking lot.

Lewis said the new plans would reduce land and environmental impacts and cut the costs of the project to $11 million, with half to be paid for with money from the Virginia Department of Transportation’s revenue sharing program, and the other half coming from city money.

Should the ordinance pass, the city would begin right of way acquisition, and in summer 2022, advertise for construction of the project, which is expected to begin by fall 2022.