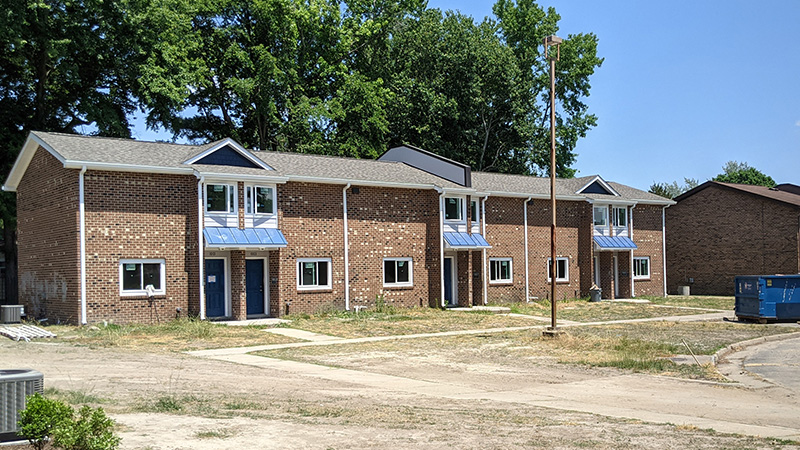 Waiting lists for Suffolk Redevelopment and Housing Authority are long.

By the time the waitlists closed for public housing in Suffolk earlier in October, officials got what they expected, as more people wanted an affordable place to live than there were available spaces in Suffolk Redevelopment and Housing Authority’s housing portfolio.

For the two-day period its public housing waitlist was opened — Oct. 5 and Oct. 6 — the housing authority received 500 applications for 20 vacancies, with five units ready to be leased, according to Executive Director Tracey Snipes. That waitlist had not been opened since 2017, according to Housing Operations Director Michell Layne.

“The people who have just applied will be getting units relatively quickly because five (are) ready right away and another 15 will be shortly following,” Snipes said.

“It just tells you how much of a need there is for affordable housing,” Snipes said.

Currently, 113 apartments at Eagle Landing are being rehabilitated and 93 more at White Marsh Pointe are being rebuilt. All will be converted into Section 8 project-based voucher assistance housing.

“We’re doing something great over there, but with those numbers … it still lets us know that it’s just a drop in the bucket,” said board chairman Quinton Franklin.

Community Development Director Tammy Jackson said Eagle Landing’s rehabilitation is on schedule, with 40 apartments complete so far. Renovations have been completed at another building, and yet another is expected to be ready by late November. Other buildings are in the midst of interior renovations.

At White Marsh Pointe, crews are installing underground utilities and building footings, the subbase for the roadways and working on building slabs. She said they have encountered challenges with wet weather, but they are on schedule.

“They’re where they should be, but they don’t want to up their timeline in case something should happen,” Jackson said, “especially with the times we’re in.”

Housing Choice Voucher Director Keva Newsome said the housing authority has 59 people with vouchers who are actively looking for housing.

“We’re starting to see applicants turn in the paperwork that is needed to begin the leasing process,” Newsome said. “As we are still dealing with COVID-19, we’re still assisting clients who are asking for extensions on their vouchers to allow more time to secure housing.”

Newsome said the need for housing is hardly an issue exclusive to Suffolk, and many property owners do not have units available due to the Centers for Disease Control and Prevention’s current eviction moratorium, set to expire Oct. 31.

“We’re slowly starting to see clients find housing and be admitted to the program,” Newsome said.

Newsome said landlords who are part of the housing choice voucher program have not had issues because “they do have the security of having those housing assistance payments.”

However, private owners who are not part of the program and are listing their properties have told Newsome they would have had units available but for the eviction moratorium.

There are 3,410 people on the housing choice voucher waiting list, according to an authority document. It states that its waiting list was last opened about a year ago.

Snipes said she spoke with Deputy City Manager Kevin Hughes and Community Development Coordinator John Brooks about finding ways for the housing authority to become more engaged in the city’s affordable housing process. She said they discussed barriers to affordable housing as it relates to construction costs, contractors and employment, becoming more involved in revisions to the city’s unified development ordinance and the city possibly developing a target neighborhood to revitalize to include owner-occupied homes, rentals and neighborhood services.

Their conversations touched on the city possibly working with the housing authority to allow development on older lots that will require variances, and the authority’s desire to develop affordable owner-occupied housing on lots it already owns.

“They’re working with us to try to provide this variance for us so that we’ll be able to build on land that’s already owned by SRHA,” Snipes said.

Snipes also brought up the possibility of the city donating vacant property it owns or donating foreclosed property that the housing authority can rehabilitate and allow for scattered-site housing in the city.

Scattered-site housing, according to the federal Department of Housing and Urban Development, is defined as any property with units in non-adjacent buildings with four or fewer total units and is an alternative to larger, and denser public housing developments, though they are also seen as more challenging to maintain and in need of different materials and building components for each.

The authority has 10 vacant properties scattered throughout the city, including some in the Orlando area and one in Jericho, but Snipes said the housing authority has to determine which ones are buildable.

“Everyone that was in the room agreed,” Snipes said, “that we needed further engagement with all the community leaders and the stakeholders to come up with an affordable housing strategy, rather it be for scattered sites or a concentrated effort in one major area. These will be conversations that we will continue to have with the city of Suffolk so that we are an intricate part of it as they’re making decisions for affordable housing in the city of Suffolk.”