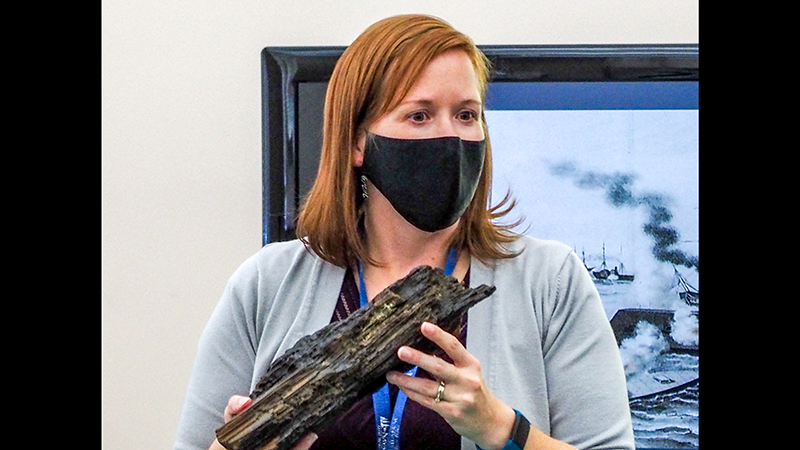 Laura Orr, director of education for the Hampton Roads Naval Museum, holds a piece of the USS Cumberland’s hull during a presentation at the North Suffolk Library’s Homeschool Hub group on Oct. 27.(Max Lonzanida photo)

More than 159 years ago, two revolutionary ironclad warships dueled off the waters of what is now the Monitor-Merrimac Memorial Bridge-Tunnel.

The clash between CSS Virginia and USS Monitor on March 8-9, 1862, was forever etched in history books as the Battle of Hampton Roads. That historic battle came to life via a presentation by the Hampton Roads Naval Museum for a contingent of local families at the North Suffolk Library’s Homeschool Hub group on Oct. 27.

Laura Orr, the museum’s director of education, breathed life into the historic battle via historic photos and a large floor map of the region. Youth participants from the audience volunteered to don period-specific uniform hats and act out the roles, while others read some primary source accounts of the battle authored by Confederate Gen. R.E. Colston. Thrown into the presentation were some footnotes on the technological advances of the Civil War, such as armor plating, the advent of steam power over sails, and, of course, the USS Monitor’s rotating turret.

History remembers that CSS Virginia sank USS Cumberland, set USS Congress on fire which caused the crew to surrender, and forced USS Minnesota to be grounded. Youth volunteers cleverly re-enacted these by falling to the ground on the large floor map, waving their hands in the air to mimic being on fire, and of course sitting on the map to depict being grounded.

The re-enacted battle took an interesting twist when volunteers depicted what occurred when CSS Virginia dueled with USS Monitor. This re-enactment took an even more interesting turn when it was noted that both youths who volunteered were related, the brother portraying the role of CSS Virginia and sister portraying the role of USS Monitor. Since both were ironclad warships, heavy cannon balls bounced off their hulls and after an epic duel, both retreated in a draw. It was at this time that all of the volunteers took a bow at the conclusion of this re-enacted historical event.

In addition to this engaging history lesson, a piece of USS Cumberland’s wooden hull was passed around for audience members to inspect. It made the history presentation a bit somber, as it was noted that Cumberland sank with 121 crew members aboard. It was also noted that the museum is the sole repository for items recovered from Cumberland’s wreck site, which lies just off the tip of modern-day Newport News Shipbuilding and Drydock. For those who are seeking additional inquiry, the museum has a piece of USS Monitor’s iron plating on display in its gallery, along with a piece of CSS Virginia’s hull. Additional items recovered from USS Cumberland, such as the ship’s bell, along with other artifacts of that period, are on display at the Hampton Roads Naval Museum’s Civil War gallery.

By 2:45 p.m., those who attended the library’s Homeschool Hub had departed, while other curious parents remained to ask questions. Deborah Owens, the library’s senior community outreach librarian, noted that she “really wanted to learn more about naval history since it’s such a big part of our local history.” Owens also noted of the presentation that “Some of us travel every day over the Monitor-Merrimac Bridge Tunnel [near the battle site], and it’s really exciting to bring that history to life.”

Homeschool Hub is part of the Suffolk Public Library’s community programs. More information, including a calendar of events can be found on their website at www.suffolkpubliclibrary.com. Laura Orr’s presentation was part of the Hampton Roads Naval Museum’s free repertoire of educational programs available to area schools. To inquire, contact her directly at Laura.L.Orr@navy.mil or visit their website at www.hrnm.navy.mil to check out their free resources.