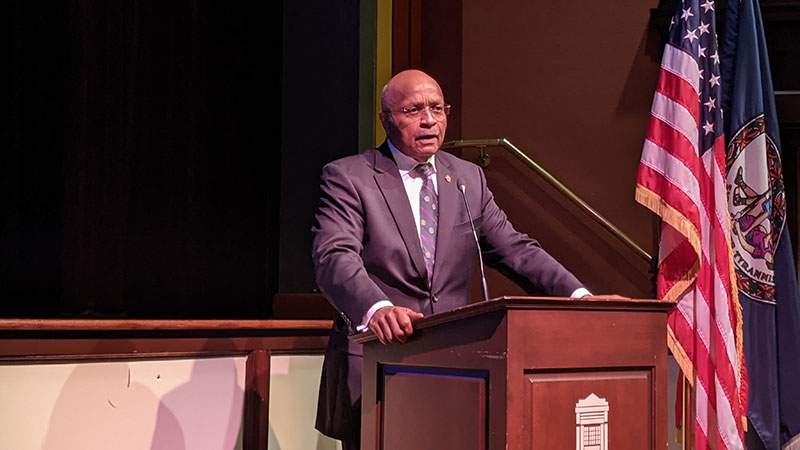 Dr. L.D. Britt addressed healthcare disparities in the United States during a keynote address to the 11th annual Suffolk Foundation Forum & Luncheon Nov. 3 at the Suffolk Center for Cultural Arts.

Britt, chairman of the Eastern Virginia Medical School department of surgery and the vice dean for clinical affairs, said the country’s current healthcare challenge is unprecedented, yet one the industry could have been better prepared for.

He said the healthcare industry should have done better with information technology, especially since it was familiar with pandemics already, but the greatest challenge is healthcare disparities.

Britt “raised the curtain” on the healthcare industry during his talk, saying there are two Americas between the insured and uninsured, and that it was never meant to be a business. He also spoke about disparities between the United States and other parts of the world that don’t have medical schools.

“This is the fact that’s disturbed me the most,” Britt said. “Forty-five thousand people die each year just for being uninsured.”

He said the healthcare industry needs a new vision and new ideas.

The healthcare industry got in trouble when it tried to make it a business, Britt said, and it should not be profit-based.

“Healthcare was never meant to be a business,” Britt said. “You have some businesses who do well and all, but you can’t apply all those principles to healthcare.

He said there are unnecessary procedures, overpriced drugs, overwhelming administrative overhead and a lack of effort to address what he called extravagant inefficiency, and that $1 out of every $3 was squandered on unnecessary procedures in the United States. Fraud, he said, is also a problem within the healthcare industry, and there are mistakes in procedures, and hundreds of falls in hospitals in the country yearly.

Britt said there needs to be excellent patient outcomes, have wise allocation of resources and effective self-regulation.

“I’m not sure we’ve done well in those three basic responsibilities,” Britt said.

He asked what kind of value the country receives for all of its healthcare expenses. He showed a chart in his presentation noting the United States ranks 45th in access to basic knowledge, or educational foundations to improve their lives, ranking behind countries such as Saudi Arabia and Lithuania. It ranks 68th in health and wellness, meaning whether people live long and healthy lives, behind countries such as Ghana, Cambodia and Ethiopia.

“But this is Suffolk, you’re OK here,” Britt said as the crowd laughed.

The life expectancy in the United States is the lowest of all industrialized countries, he said, 80.4 years for women and 75.3 years for men.

The country is not getting good value for its health dollar — “the money’s there but it’s misappropriated” — and healthcare expenses are continuing to grow.

“More money will not solve this problem,” Britt said. “We have now a $4.25 trillion industry. … There’s no other legal trillion dollar industry in the country.”

Britt said if he looked at the trends in healthcare, it needs to work on safety and disparities. He cited a statistic of 44,0000 to 98,000 deaths per year in the United States due to medical errors.

To have a successful healthcare industry, it must be able to consolidate, be cost-effective and have advanced information technology.

There have always been disparities, but they’re not just based on race, but also based on poverty and level of formal education.

“Disparities have existed in healthcare ever since we’ve had records of them,” Britt said. “There’s never been a time we didn’t have disparities.”

“We’re in a Renaissance period,” Britt said. “It should not take us three centuries to get through it.”