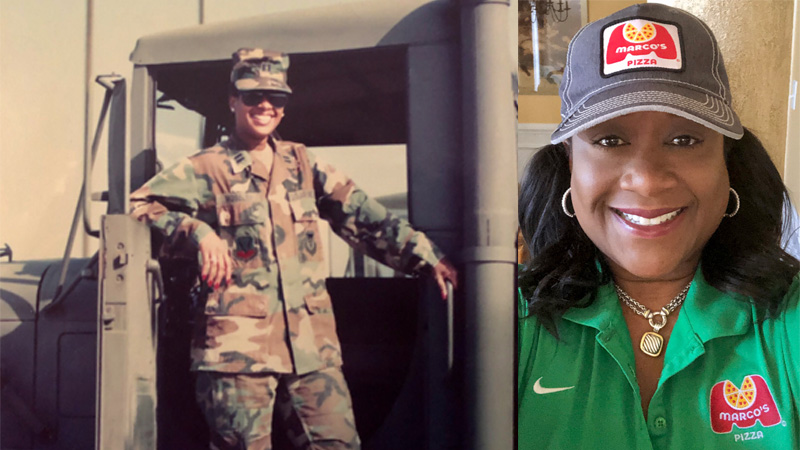 Stephanie Moseley has parlayed her experience as an Air Force veteran into a successful career as a franchisee with Marco’s Pizza. She owns the store in North Suffolk as well as two other locations in Newport News and Yorktown, and is soon to break ground on another Newport News location.

Stephanie Moseley learned a lot of skills while in the U.S. Air Force, and she has since parlayed them into being a successful franchise owner.

On Thursday, the owner of the Marco’s Pizza in North Suffolk, as well as of the Marco’s locations in Newport News and York County, will be celebrating Veterans Day and thinking about how her experience in the military started her down her current path.

Moseley comes from a military family — her father was a World War II veteran and retired from the U.S. Navy. She was born in Pisa, Italy, and though his service ended when she was at a fairly young age, she grew up hearing stories and seeing pictures.

When she attended college, she initially didn’t know what she wanted to major in but found herself drawn to ROTC. When she graduated, she was commissioned as an officer and rose to the rank of captain during her eight years in service.

“It was a great time,” she said. “I met a lot of great comrades, and we’re still friends to this day.”

Moseley said the military made its mark on her with skills in leadership, structure and organization, being flexible and resilient and accomplishing the mission.

“They expect a lot from you,” she said. “You’re immediately put into a leadership position, and whether you’re ready or not, you better step up.”

Moseley’s experience transferring her skills developed in the military to being a franchise owner is not unusual; in fact, while about 6.1% of all U.S. businesses are owned by veterans, the percentage of franchise owners is more than double that at 14%.

“Veterans possess transferable skill sets that are very aligned with what franchisors are looking for,” said Boynton Weekes, a consultant with FranNet, which offers free franchise information and consulting to individuals looking to start a business through franchise ownership. “These skill-sets include leadership, how to train and run a team, looking at the overall mission of a group, perseverance and discipline.”

Because of this, a lot of franchisors actively incentivize veterans to pursue franchise ownership, Weekes said, sometimes through discounts in the startup costs.

Moseley started working as a pharmaceutical sales representative after the military but also wanted to own her own business. She started looking into franchising.

“I wanted it to have an Italian concept, because I was born there and I love Italy,” she said. “That’s how I named my company Pisa Pie.”

With three stores already and another in Newport News about to break ground, Moseley’s ultimate goal is to have 10 stores in the region.

“I love being part of the communities that I serve,” she said. She also takes pride in developing young people in the beginning of their careers.

“Just to be able to be that positive stepping stone for kids entering the workforce, to get them through high school with a little change in their pocket and into a professional career,” she said. “I always try to tell kids when I talk to them, ‘I don’t want to see you in my store four or five years from now unless you’re going to be a manager. This is a stepping stone into a professional career of your choice.’”

Moseley noted that both the military and the franchise world are ever-changing, and she has put her skills in flexibility to good use. Never was that more apparent than during the pandemic and the associated stay-at-home orders — her North Suffolk store thrived while a couple of eateries in the same shopping center closed down.

“Marco’s was poised to be able to help in a Covid environment,” she said. “Our franchise model is delivery and carryout. When people found themselves stuck in the house, and trying to navigate this new normal, my business model was such it could almost immediately help families. Marco’s Pizza provided comfort during the chaos.”