Expanding student art into the community 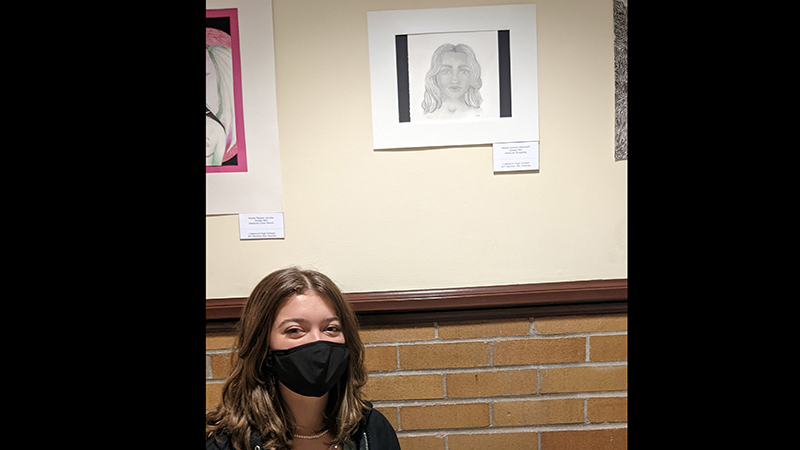 Audrey Maynard, a ninth-grade student at Lakeland High School, stands near her graphite self-portrait drawing that is on display at the Suffolk Public Schools Secondary Art Show at the Suffolk Center for Cultural Arts.

Audrey Maynard said she liked her self-portrait but didn’t think it was her best.

Still, the Lakeland High School freshman said it was a big, meaningful step for her to have others outside school be able to see what she had created. Her artwork was one of just about 30 hanging in the Suffolk Center for Cultural Arts as part of Suffolk Public Schools’ Secondary Art Show display.

Maynard was on the second floor in the west corridor of the Suffolk Center as part of a Nov. 9 reception for the public unveiling of the student artwork that brought out many of the artists, their families and teachers, among others who turned out to see a diverse and impressive array of work.

Though she had been creating art from when she was little, it has taken on more importance for her over the past couple of years.

“It’s a big part of my life,” Maynard said. “It helps with my anxiety and helps me release stress.”

Dr. Joleen Neighbours, SPS supervisor of fine and performing arts, was more than ready for the first major student art show in about two years due to the coronavirus pandemic.

“It was a year-and-a-half before they could make things,” Neighbours said. “So now they are. We used to do this at the ODU Tri-Cities Center, but that’s all the way in North Suffolk, so now it’s central, it’s actually in the Suffolk Center, so now we can really have a real partnership. We may switch some things out during the year, but I’m really excited.”

Tanner March, a sixth-grader at Forest Glen Middle School, came with his family to see his artwork, a positive/negative abstract.

“We were just doing free drawing, like random shapes, and I just drew that,” March said, pointing to his artwork on the wall.

Neighbours said she was excited for the student art that was on display during Peanut Fest in October, but while that was a temporary showing, the Suffolk Center exhibit will stay for a few months before being rotated for other student works of art. She said plans are under way to display artwork from elementary students, and there are plans to expand the display area to the east corridor of the floor, allowing for even more student artwork.

“You need to see the students doing stuff in the community,” Neighbours said. “I mean, this is what community arts is about.”

Neighbours, who also noted the new Wednesday Arts Academy that just began at the Suffolk Center, said she has enjoyed visiting classes and seeing the creativity flow within them.

“It’s been nice to go into the different art and music classrooms in the last two months and seeing people doing,” Neighbours said, “which is what they need to be. We were just talking about that. If I were to come by your classroom and your kids aren’t doing, there’s a problem.”

She laughed as she said that, but she hasn’t come across that in her classroom visits.

Neighbours praised Lakeland’s new art teacher, Jessica Haynes, not long before Haynes walked by on her way to see the artwork of her students, and others, on display.

“She’s literally the same age as my daughter (and) she’s right out of college,” Neighbours said. “And she’s been getting amazing stuff out of her kids. You would have thought she’d been teaching for years and years. She’s good.”

Haynes deflected the praise to her students and enjoyed seeing the public display of her students’ artwork.

“I’ve never been to an exhibit like this, how it’s presented,” Haynes said. “I think it’s more public. It’s more welcoming. I like it.”

Her plan is to see more SPS students showcase what they can do across the arts spectrum, and she expects to have students be an even bigger part of the arts community with the new Center for Performing and Production Arts at Lakeland that will begin with the 2022-2023 school year.

“That’s my job,” Neighbours said. “It’s to make sure that everybody sees what these kids can do.”

And as she said that, she pointed to March’s family taking photos of him next to his artwork and beamed.

“See that, right there?” Neighbours said. “That’s what makes it worth it.”