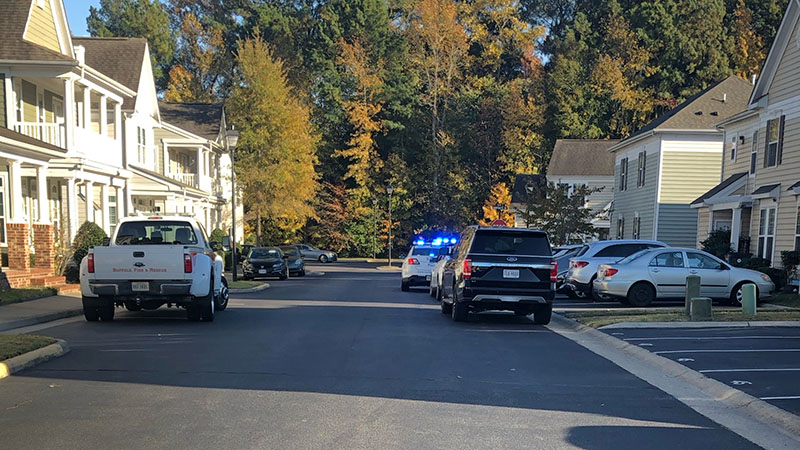 Police are on the scene of a barricade situation. (City of Suffolk Photo)

UPDATE: Suffolk Police have made an arrest in a barricade situation that happened Saturday afternoon.

Ford Jackson, 45, of Chesapeake, has been charged with armed burglary, use of a firearm in commission of a felony, abduction, attempted malicious wounding and shooting into an occupied dwelling, according to a city press release.

There were a total of three hostages. There were no injuries.

The investigation remains ongoing. If anyone has information regarding this incident, please contact Suffolk Police or Suffolk Crime Line.  To submit online, go to www.p3tips.com, visit the Suffolk Police Department website (www.suffolkva.us/spd) and look for the Suffolk Crime Line link, or go to the Suffolk Police Department Facebook page at www.facebook.com/suffolkpolicedepartment. You can also call 888-LOCK-U-UP, 1-888-562-5887, Option 5. Once a person submits a tip, they will be given a TIP ID and password. With this information they can login at p3tips.com and submit follow-up information, engage in two-way dialogue, be informed of the outcome of the tip, and access any pertinent reward information.

UPDATE: The barricade situation ended peacefully Saturday evening when the subject involved was taken into custody, according to a city press release.

There will continue to be a large police presence in the immediate area while the investigation remains ongoing; however, there is not believed to be any further need for residents in the area to shelter in place.

“The Suffolk Police Department would like to thank the residents in the surrounding area for their assistance during this incident,” the press release stated.

Earlier: Suffolk Police are currently on the scene of a barricade situation in the area of 2200 block of Humphreys Drive.

The incident began at 12:45 p.m. Saturday in the area of Hampton Roads Crossing after Emergency Communications received a call for service regarding a person with a gun during a domestic-related disturbance, according to a city press release.

The Crisis Negotiations Team, SWAT and multiple officers are currently on scene. Citizens and motorists should avoid the area, and residents in the immediate area should shelter in place until advised otherwise, the release stated.

This investigation is ongoing at this time.