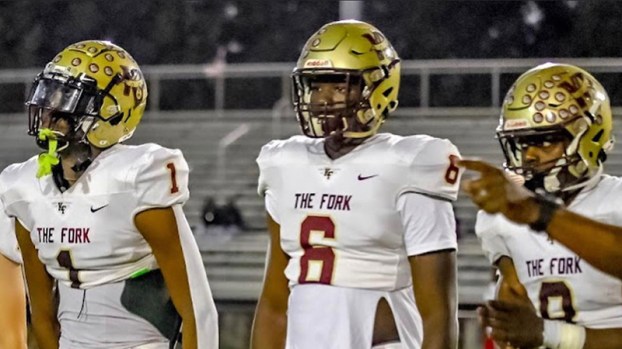 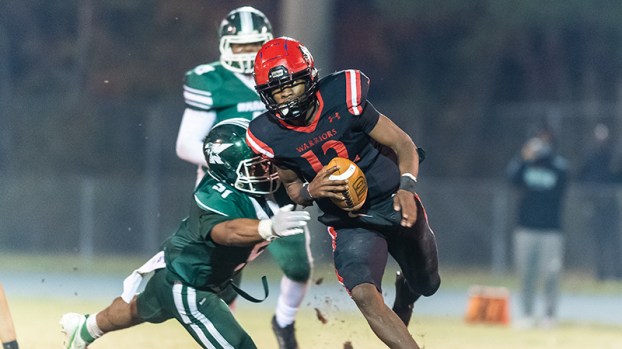 King’s Fork High School’s varsity football team recently advanced to the Region 4A semifinals in dominant fashion, Nansemond River High School used clutch play in the fourth quarter to reach the semifinals in Region 5B, and Nansemond-Suffolk Academy’s season came to an end in the state semifinals.

The top-seeded Bulldogs shut out visiting No. 8 Smithfield High School for a 42-0 victory in a quarterfinal game that was moved to Thursday, Nov. 11, due to the threat of inclement weather the next day.

“Our team did a great job of playing together and facing adversity to go 1-0 on the week,” King’s Fork Head Coach Anthony Joffrion said. “We are very excited to play a talented and well-coached Deep Creek football team.”

In an Oct. 8 regular season meeting between the two Southeastern District teams, King’s Fork recorded a 31-15 road win over the Hornets.

Standouts on offense for the Bulldogs against Smithfield included Cameron Butler, who was 6-for-9 passing for 167 yards and two touchdowns; Javon Ford, who had 15 carries for 122 yards and a touchdown; and Kaletri Boyd, who recorded six carries for 68 yards and a score.

In the first round of the Region 5B playoffs, No. 3-seeded Nansemond River’s showdown with visiting No. 6 Kecoughtan High School on Friday, Nov. 12, came down to the Warriors’ final drive. Nolan James connected with Terrell Douglas on a 22-yard touchdown pass to clinch an 18-12 victory for NR.

“I thought we really played hard and fought to the end,” Warriors Head Coach Alonzo Ricks said. “I was really proud of our guys on how they handled the situation on the last drive. We went against a very quality opponent in Kecoughtan. They fought hard too, but we found a way to execute down the stretch and make some outstanding plays to close it out.”

“North Cross is a well-coached, talented football team, and we made too many mistakes to play the way we are capable,” NSA Head Coach Mike Biehl said. “I give a lot of credit to Coach Alexander and the entire North Cross team.”

Biehl said he thought the Saints’ plan was good and that they had an excellent week of practice.

“Unfortunately we did not carry either over into the game, and that is on me, and I have to evaluate the whole process of getting our guys to perform in these big-time moments,” he said. “We were more than capable of going toe-to-toe with them, and at times we showed that, but it wasn’t consistent throughout the game, and it hurt us.”

Nansemond-Suffolk’s final overall record for the 2021 season was 7-4, including the playoff loss.

Sharing how he will remember the 2021 Saints, Biehl said, “Each team is unique and unto itself, and this one follows suit. When I think about this team — the 50th NSA football team — I’ll think about our senior group that was one of the most talented we have had here. I’ll think about this group’s ability to take obstacles and adversities and just keep moving forward. Lastly, I will remember how hard this group played regardless of the situation; we didn’t end the way any of us wanted or envisioned, but I am extremely proud of the toughness and grit this team showed, and I am excited for what the future holds because of what this team has done.”