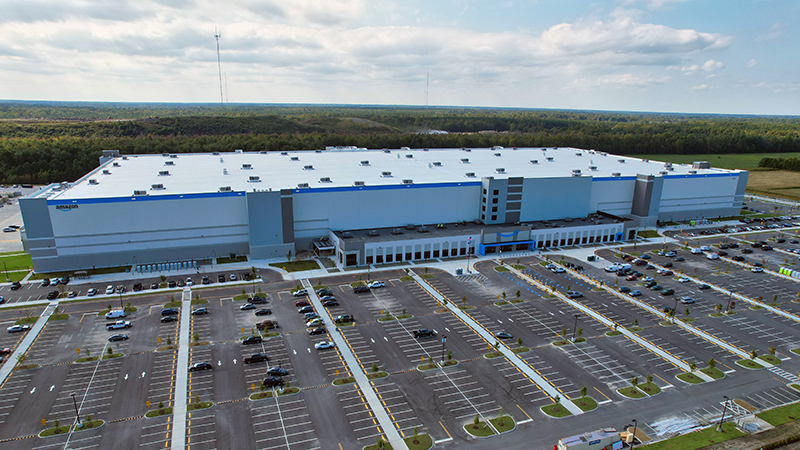 Amazon’s new robotics fulfillment center in Northgate Commerce Park is scheduled to be operational in the first three months of 2022. It is one of several industrial sites, totaling more than 5 million square feet, that is on pace to open next year.

The year 2022 figures to feature a transformative boom in industrial openings across Suffolk.

Between Amazon opening its robotics fulfillment center at Northgate Commerce Park in the northern part of the city, to a trio of buildings in Virginia Port Logistics Park off of U.S. Route 58 and a pair of buildings at logistics centers in North Suffolk and off the Route 58 Bypass and Carolina Road in the south, more than five million square feet of openings will dot the city’s landscape in the next year.

“The development activity taking place in the City of Suffolk is important to the future of The Port of Virginia and the economy of the Hampton Roads region,” said Stephen A. Edwards, CEO and executive director of the Virginia Port Authority in a statement. “There is a real economic advantage for a company when it is located near its logistics hub, and there are significant benefits for us because we can work with that company to grow its cargo volumes moving through our efficient gateway.”

Edwards said the jobs and economic investment coming to the city and the Hampton Roads region are equally important, and he praised the city’s leadership and economic development team to promote it as a desirable business location.

Mayor Mike Duman said it’s an exciting time to be in the city.

Amazon’s fulfillment center in the city, nearing operational completion and expected to open sometime in the first three months of 2022, features an 860,000 square-foot footprint and at 90 feet high, is four-and-a-half stories tall.

Overall, it will have more than 3.8 million square feet, making it the second-largest building in the state after the Pentagon, and it will employ about 1,000 people.

Equus Capital Partners owns and is developing the 900-plus acre master-planned industrial park, and currently has about 2 million square feet of space. Companies such as Ace Hardware, Friant Furniture, Emser Tile, NEXCOM and Massimo Zanetti Beverage already operate out of it.

In North Suffolk, RoadOne Intermodal Logistics will lease the 338,000-square-foot Building One in Portside Logistics Center, owned and developed by Brookwood Capital Partners owns and is developing the logistics center, and Harvey Lindsay Real Estate is leasing it. The master-planned development has been engineered to provide 570,000 square feet in two separate buildings.

Another 813,721 square feet of industrial space in the Coastal Logistics Center off the Route 58 Bypass and Carolina Road is being marketed for lease in the last three months of 2002. Flint Development owns and is developing the property, and CBRE is leasing it. Site work has recently started at the 70-acre master-planned site.

Additional phases will include more than 1.6 million square feet and 3,000 trailer spaces.

Businesses have looked at the city’s proximity to the Port of Virginia, a vast regional transportation infrastructure, available land and access to a qualified labor pool as assets in attracting industrial development and investment.

Other industrial projects are in the early stages.

At McDonald Development’s 219-acre Westport Commerce Park off Route 58, site clearing and on-site infrastructure prep work have started on a site that can host more than 2 million square feet of industrial space in multiple buildings.