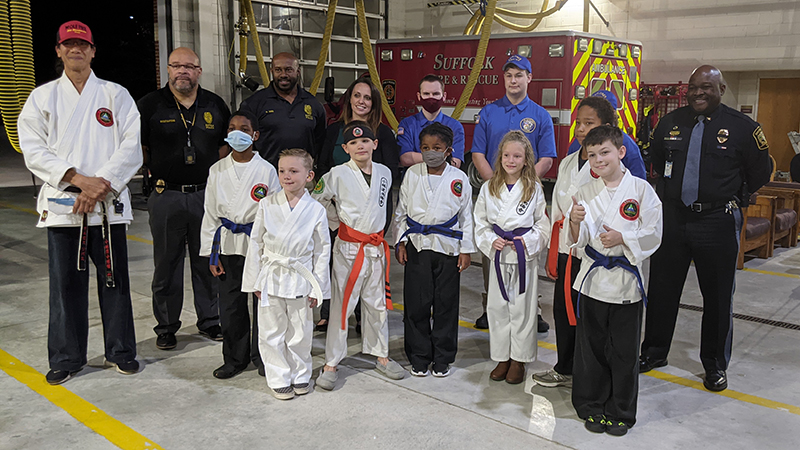 C.E. Rivas and children from the Mount Everest Karate Studio in Eclipse presented the Suffolk Police Department and Explorer Post 124 an $800 donation as part of a fall food drive for the Foodbank of Southeastern Virginia and the Eastern Shore.

The young members of the Mount Everest Karate Studio in Eclipse were clearly excited to get close-ups with police and fire and rescue vehicles, and they got to ask questions of officers and firefighters about their jobs.

But what brought them and their teacher, C.E. Rivas, there was something selfless. They spent several weeks raising money — $800 total — to give to the Suffolk Police Department and Police Explorer Post 124 for their fall food drive for the Foodbank of Southeastern Virginia and the Eastern Shore.

They dropped off their donations in person Nov. 18 and got a tour of both facilities with Interim Police Chief Al Chandler and members of the police department and Suffolk Fire & Rescue.

“I thought it would be a good opportunity for my kids to contribute,” Rivas said. “I thought it was a good cause for the community.”

Rivas said the idea to raise money for the food drive came from the department’s Facebook post about it. He said more than 90% of the 36 members of his karate studio took part.

Chandler said he and the department appreciate the efforts of the kids from Mount Everest Karate Studio.

Chandler and Lt. Gary Myrick were in their element as they spoke with the children about their jobs and the police vehicles — including the massive BearCat tactical vehicle. Fire & Rescue Station 5 staff showed the children around the station as they got to climb in fire trucks and sound the horn.

The children, even before they handed over their donation, got gifts from Suffolk Police and Fire & Rescue, and as appreciative as they and Rivas were to be able to give back to the community, Chandler said he appreciated the donation by the children, and the opportunity to engage with them in a positive light.

“It’s an amazing opportunity,” Chandler said, “mainly because this is another illustration of how important it is to work in the community. Our work with the community is not just about crime. It’s about personal responsibility, making sure that they’re responsible for the community that they are in.”