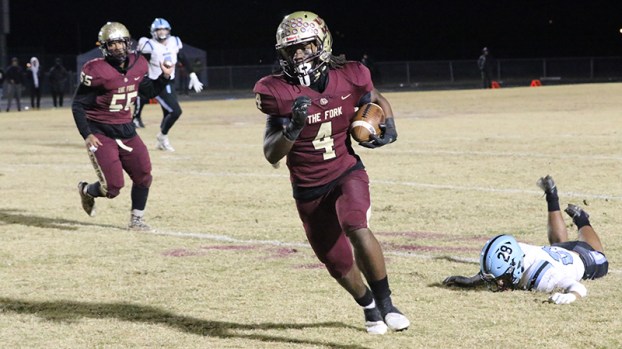 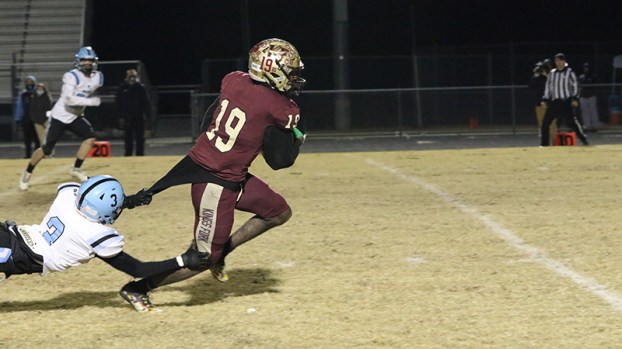 King’s Fork High School senior wide receiver Mar'keese Green pulls away from the defender to turn his reception into a touchdown catch and help give the Bulldogs a 35-14 lead during the Region 4A championship game Nov. 26 in Suffolk.

The No. 1 Bulldogs jumped out to a 21-0 lead against visiting No. 3 Warhill High School in the first quarter of the Region 4A title game, and while the Lions bounced back, the Bulldogs ultimately quashed that momentum to pull away for a 41-14 victory.

King’s Fork Head Coach Anthony Joffrion understood the significance of what his team had accomplished, and he expressed it in postgame comments.

“It’s a huge deal,” he said. “It wasn’t just ’cause of me, it’s ’cause of these coaches. They sacrifice so much to invest in these young men. And then our young men, our student-athletes do a great job of just responding to adversity, taking coaching, because we coach them very hard, and they do a great job of just responding to it. They don’t pout, they don’t finger-point, they stay together as a family, and I think we did a really good job of creating a family environment here at King’s Fork.”

Joffrion then highlighted some of his Bulldog coaching predecessors in the same moment.

“To follow a guy like Joe Jones, Scottie Littles, Kermit Buggs, Cecil Phillips, who was the first head coach here, just to even be mentioned with some of those names is just very exciting, and (I’m) very excited for our football program,” he said.

King’s Fork executed a successful goal line stand, after which it went about the business of regaining the momentum.

Junior Cameron Butler connected with junior Kaletri Boyd on a 39-yard pass play, and then Boyd ran for a 59-yard touchdown to help make the score 28-14 at halftime.

“Kaletri Boyd had a huge performance for us with his ability to be a leader,” Joffrion said. “He did a great job of making big plays when we needed them the most.”

The Bulldogs defense clamped down on the Lions after their second touchdown, leading to Warhill punts and turnovers on downs throughout the rest of the game.

Boyd, who also played on the defensive side of the ball, said the key to the victory was defense.

“If we kept getting three-and-outs, three-and-outs and kept them from holding the ball all game, (our) offense was going to go down there and score on them every time,” he said.

“It means a lot to be able to come out here and leave everything on the field,” he said. “We practice hard, and it’s actually starting to pay off — it means a lot.”

King’s Fork Athletics Director Randy Jessee, who has been at the school for 16 years, said it felt great to see the football program reach this level of success for the first time.

“We’ve had a great administration staff ever since I’ve been here,” he said. “They’ve helped (the school) grow, athletics-wise. We’ve had some very good coaches.”

He noted Joe Jones was present at the game, and then he took time to praise Joffrion, who has been the head coach for two years and served as an assistant coach about four years ago.

“Coach Joffrion has done a great job with these young men,” Jessee said, before adding that it is a big feather in the cap of the players to bring the championship home.

King’s Fork Principal Derrick Bryant was on the field after the game and expressed his joy in the team’s unprecedented achievement.

“It’s great,” he said. “It’s just good for these guys. I’m glad for them. They work so hard all year. So many things could have stopped them from doing what they needed to do, but they came together another time tonight and just put it together for us.”

When describing the deciding factor in King’s Fork’s win, Joffrion said, “Our team did a great job battling adversity and sticking together.”

Jones, who was the Bulldogs’ head coach from 2008-15, leading them to their first playoff berths, playoff victories and first 10-win season, shared his thoughts Nov. 29 on what the 2021 team did Friday.

“I was so excited and happy for the team, the coaches and the school on winning the first regional championship,” he said. “A lot of blood, sweat and tears have been put into the program by the coaches and players who came before this team to help set the table of being a champion. It was so good to see some former players on the coaching staff and former players there watching the game with an immense amount of pride.”

In their inaugural game at the state level, the Bulldogs will look to defeat a Varina team that was the No. 3 seed in Region 4B and that defeated No. 5 Patrick Henry High School, of Ashland, 16-14 in that region’s title game.

Boyd said, “At the state level I feel like we’ve just got to go hard, practice every day, don’t take any days off, keep a tunnel vision, and I feel like we’re going to go all the way.”