‘A miracle that I’m even here’: COVID survivor reflects during Obici memorial ceremony 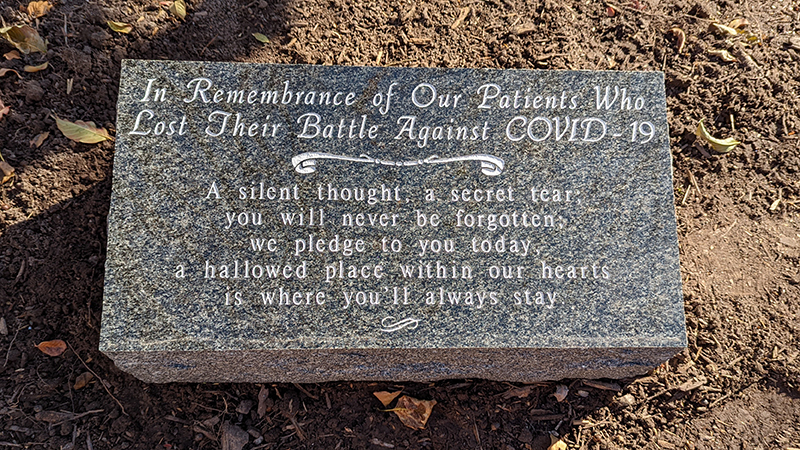 A memorial stone was dedicated in remembrance of COVID-19 patients who died at Sentara Obici Hospital during a Nov. 30 ceremony in its rose garden.

Rose Bailey eased herself up from her chair, using her cane to help take the few, deliberate steps to the microphone, standing just feet from the memorial stone being dedicated to the memory of those who died at Sentara Obici Hospital due to COVID-19.

But after contracting the virus and spending a month in the hospital, not always knowing whether she would live, the 42-year employee felt fortunate she was healthy enough to attend the Nov. 30 remembrance ceremony in the Obici rose garden.

“It is a miracle that I’m even here today to even be back at work,” Bailey told the more than 60 people, most of them hospital staff.

Bailey, a quality improvement coordinator who had received her first vaccination in December 2020 and her second in January, spoke haltingly as she shared her story.

She came down with COVID-19 in July, realizing that she was feeling sick during a conversation with Vice President of Medical Affairs Dr. Michael Genco.

“I remember meeting with Dr. Genco in my office and telling him that I wasn’t feeling good,” Bailey said. “And within three days, I was in the hospital.”

It was a new experience for Bailey to be hospitalized, having only been admitted once before, when she was a 5-year-old having her tonsils removed.

She wore her mask everywhere, and washed her hands, she said, doing everything she knew to do to stay safe from the virus.

Bailey arrived and was admitted to the hospital, diagnosed with bilateral COVID pneumonia and, shortly thereafter, put on a ventilator. She stayed on it for two weeks.

“If anyone knows anything about ventilators … COVID patients don’t usually get off ventilators after a week, from what I’ve read of literature,” Bailey said. “So I’m very blessed to be alive to tell my story.”

She elicited a chuckle when she noted how she extubated herself, and then had a colleague of hers re-intubate her, but as she thanked the doctors, nurses and hospital staff for their care, she noted her battle with COVID-19 nearly cost her her life.

“They were there for me, they didn’t give up, even when they had to tell my family that I probably wouldn’t make it,” Bailey said, holding back tears, “that I’d probably end up, if I did, with a feeding tube and a (tracheostomy) to breathe. But I didn’t. I ended up recovering.”

She credited her family at home, her hospital family and the many prayers she received for being the walking miracle she believes she is. Only in the last four weeks has she returned to work — coming into the hospital twice per week and working from home three days weekly.

“It’s very scary. I was very scared,” Bailey said. “I remember my sister told me I texted her before I went to be intubated and said, ‘I’m scared,’ but I had so much support from the hospital and the staff, taking care of me, the nurses, respiratory therapists, the doctors, the intensivists, the hospitalists, it was wonderful.”

Bailey, after being released from the hospital, completed a month of physical rehabilitation before doing more physical therapy at home, which has included various exercises to include walking — “I didn’t think I’d ever love to walk down the street,” she said with a chuckle, “trying to get my strength back.”

“I’m getting up and walking and doing those things, but at the end of the day, I’m still tired,” Bailey said.

The hospital, at the request of its staff, held the ceremony and dedicated a small, in-ground monument to remember its COVID-19 patients and the staff who have been caring for them for more than 20 months.

“It was important to them to have some recognition,” said new Obici president David Masterson. “Usually you try to wait until the end of an event to look back and recognize, but there was no end in sight. We thought it would slow down and it picked up again, so we felt like this was the time.”

On the monument, it says, “In remembrance of our patients who lost their battle against COVID-19.” Underneath, a poem: “A silent thought, a secret tear; you will never be forgotten; we pledge to you today, a hallowed place within our hearts is where you’ll always stay.”

They remembered the 248 people who have died at Obici as of Nov. 30 since the start of the coronavirus pandemic.

But Masterson, who had a family member die due to COVID-19 after spending 30 days in the ICU, proned and on a ventilator, also wanted to highlight that nearly 87% of COVID-19 patients at the hospital have been treated and released — 1,602 of them. Still, even as he said that, he noted patients who were still in the hospital with the virus as he spoke.

“I think that (the) recognition just really kind of laid the mark that it was time to recognize not only those that passed,” Masterson said, “but all the success stories, almost 1,700 who have been treated and released and are healthy again.”

Bailey, who has no memory of her time in the ICU, urges everyone to get a COVID-19 vaccine or booster. She will be getting her booster in December.

“I know there’s a lot of people who did not make it, who have lost their lives, and I pray for them all the time, but it was a long way (back),” Bailey said. “But I’ve come back.”

Obici chaplain Kathy Pickett, during the ceremony, offered her own prayer for everyone in mourning over having lost someone close to them from COVID-19.

“For the experience we have gone through, we will never be the same,” Pickett said. “We have encountered something in our lives that no other generation before has ever seen. So in this respect, we’re different. Books will emerge from many, some perhaps in this gathering, that speak of subjects such as feelings of hopelessness, fear, sadness and grief. But let us not forget another word: resilience.”

“We are survivors who have lived to tell a story, a story that has changed us forever. We have watched medical personnel raise up and give their best to save a life. Prayers bombarded heaven, tears were shed, hugs exchanged with the warning that we, too, could die from the very disease that took our loved one. But today, we stand as one, having made it through.”

Masterson, though, noted the strong grip that COVID-19 still has.

“I’d like to say that’s the end of it, and we’re not going to see any more,” Masterson said. “(But) there are more here today. There’ll be more here tomorrow, and we’ll continue our commitment and our faith and our compassion in taking care of these patients and their families.”