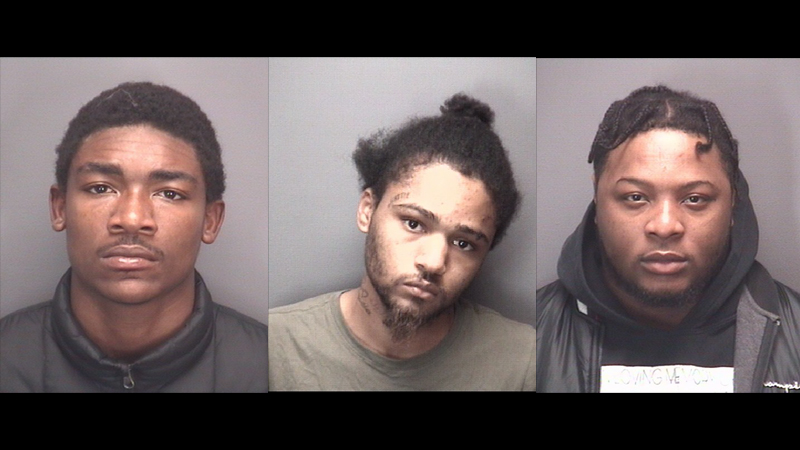 Two men have been arrested, and one additional man is charged and being sought by police, in relation to a fatal shooting that happened Nov. 28.

Jason Javon Lewis, age 21, of Portsmouth, died in the shooting, which happened in the 1100 block of Cogic Square.

Kareem Jamal Hunter, 24, of Suffolk, was arrested Thursday on charges including first-degree murder, shooting from vehicle, shooting across road, discharge firearm within 1,000 feet of a school (The Children’s Center), possession of firearm by a convicted felon, shooting with intent to maim, and use of a firearm in commission of a felony, according to a city press release.

Hunter was originally identified by the city as one of the victims of the shooting. He had been hospitalized with injuries considered life-threatening after the shooting, and now is in custody at the Western Tidewater Regional Jail.

Dennis Whitehead, 21, of Suffolk, also is charged in the shooting and turned himself in to police Thursday evening.

Whitehead has been charged with first-degree murder, shooting at an occupied vehicle, discharge firearm within 1,000 feet of school, possession of a firearm by a convicted felon, shooting with intent to maim and use of a firearm in commission of a felony. He also is at Western Tidewater Regional Jail.

One additional subject also is sought after charges have been placed.

Latrawn Armstrong, 21, of Suffolk, is charged with first-degree murder, shooting at an occupied vehicle, discharge firearm within 1,000 feet of a school, shooting with intent to maim and use of a firearm committing a felony. Armstrong is possibly residing in the 100 block of Wake Forest Court and is believed to be armed and dangerous, according to the press release.

The investigation remains ongoing at this time. Anyone with information on the whereabouts of Latrawn Armstrong are asked to contact Suffolk Police or Suffolk Crime Line.  To submit online, go to www.p3tips.com, visit the Suffolk Police Department website (www.suffolkva.us/spd) and look for the Suffolk Crime Line link, or go to the Suffolk Police Department Facebook page at www.facebook.com/suffolkpolicedepartment. You can also call 888-LOCK-U-UP, 1-888-562-5887, Option 5. Once a person submits a tip, they will be given a TIP ID and password. With this information they can login at p3tips.com and submit follow-up information, engage in two-way dialogue, be informed of the outcome of the tip, and access any pertinent reward information.