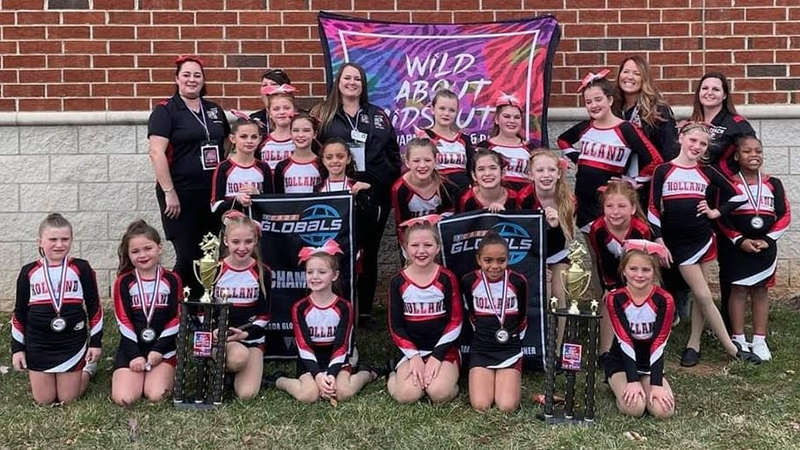 The Holland Razorbacks Jr. Peewee Cheer Team is headed to Orlando, Fla. to compete in the National Championship. (submitted photo)

A young cheer squad will represent the Holland area of Suffolk this coming week as they compete for a national title.

The Holland Razorbacks Jr. Peewee Cheer Team is competing in the Pop Warner National Championship on Dec. 7 in Orlando, Florida, against teams from across the country.

The Holland Razorbacks football and cheerleading teams have played as recreational teams for more than 30 years. This year, the teams decided to become Pop Warner competitive teams. The Jr. Peewee team with girls ages 8 to 12 has made the most out of its first competitive season.

“We’re very excited,” said Heather Berland, head cheer coach. “We are proud of our girls. They’ve practiced three to four nights a week since August and have worked so hard. We are truly proud of them.”

The girls won first place at the local competition in Portsmouth and in regionals in Concord, North Carolina, for their theme dance. Coming from Holland, a more rural part of Suffolk, the girls chose a country theme and performed a country line dance routine.

“We’re excited to see if we can bring home another title,” said Berland.

The girls will travel to the Orange County Convention Center to compete against 300 teams for the national title. This year, the competition is sponsored by Universal Orlando Resort after 25 years of being at Walt Disney World. These girls will get many experiences during the week that they’ll remember for years to come.

In preparation for this competition, the team hosted numerous fundraisers, including selling Krispy Kreme doughnuts and hosting a car wash. Sadly, all their efforts came out a bit short. Those who would like to give to help cover the costs of lodging and other expenses that come with the competition can visit their GoFundMe at gofundme.com/f/holland-razorbacks-cheer. There’s also a space to leave a word of encouragement for the girls as they represent Suffolk.