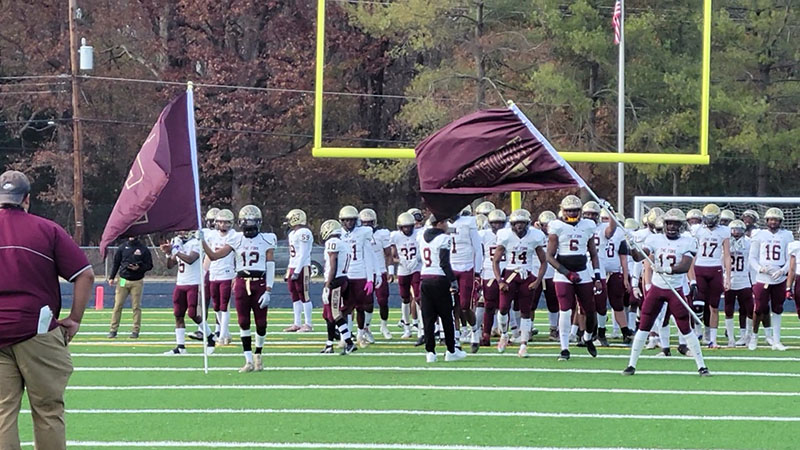 On Saturday morning, King’s Fork ventured outside of the 757 for the first time in the history of the program. Their destination was Varina High School to face the Blue Devils, a program that rose to fame in the ’90s and early 2000s as a perennial regional and state power. For the Bulldogs, this was their first trip to the state semifinals, but they were not intimidated, and that attitude was displayed from the start.

Before the first snap could be made, the two teams jawed at one another with school flags flying from both ends of the field. The intensity was rising between the teams and between the fans.

Varina won the coin toss but deferred. King’s Fork wasted very little time getting on the board. The Bulldogs put together an 80-yard, four-play drive with Cameron Butler hitting Kaletri Boyd with a 76-yard touchdown pass on a third-and-six situation. The quick score and big play was a sure sign the Bulldogs were not just happy to be there.

Over the next four quarters the two teams would duke it out, trading scores. Varina answered that first touchdown by the Bulldogs within two and a half minutes, with Anthony Fisher scoring from 11 yards out. Anthony Fisher of Varina would have a big game for the Blue Devils with a three-touchdown day.

In the second quarter, the Bulldogs re-took the lead, only to have the Blue Devils score a minute later. Markeese Green found himself on the receiving end of not one but two Butler passes in this contest with touchdown catches of 22 and 40 yards.

With a 21-14 lead nearing halftime, it seemed the Bulldogs would go into the half with the lead, but it was not meant to be. With the Blue Devils facing a third-and-eight with less than 30 seconds to go, quarterback Myles Derrciott with some fancy footwork evaded the Bulldog defenders scrambling for a 19-yard touchdown.

After a scoreless third quarter, the Bulldogs found themselves trailing for the first time 28-21 with a little less than eight minutes to go in the game. King’s Fork answered with Cameron Butler’s fourth touchdown pass of the day, this one to Bravion Campbell.

With 2:35 to go in the game, tied at 28, it appeared the contest might be headed for overtime, as the Blue Devils would have to go 80 yards to score. Myles Derricott and company played the Varina sidelines with quick strikes to stop the clock. Along that sideline, it appeared there was the first turnover of the game, as it appeared the Bulldogs had intercepted Derricott, but instead a pass interference penalty was called against the Bulldogs. A couple of plays later, Derricott hit Anthony Fisher with the Blue Devils backed up after a Tavias Higgs sack.

Fisher on the catch nearly got to the end zone but came up short. Kyree Surita did not as he scored from four yards out with :41 seconds to go in the game.

King’s Fork would do their best to rally, but two sacks on Butler did not help and his next two passes were broken up.

Although the loss stung, the Bulldogs did this season what no Bulldog team before had. In a loss, the Bulldogs and Coach Joffrion laid the foundation for future Bulldogs.