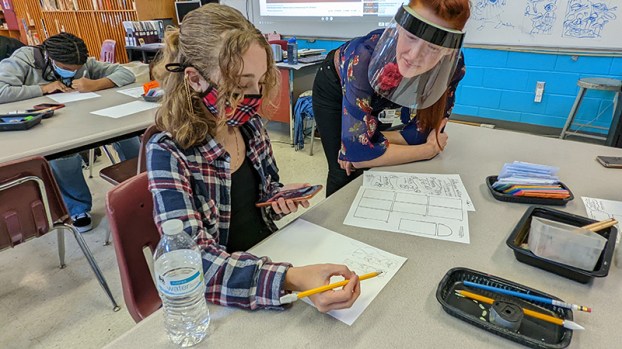 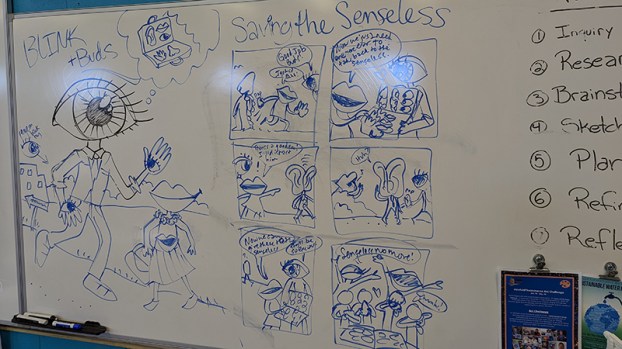 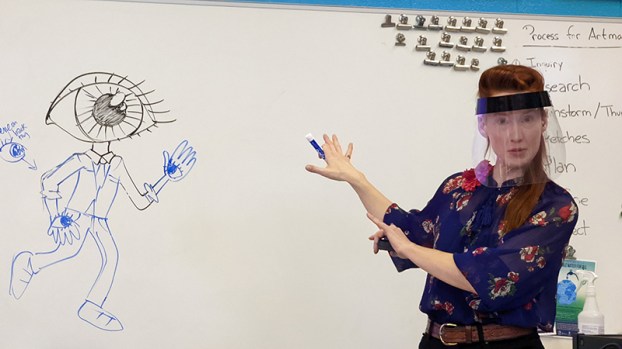 Laura Lee Gulledge’s love of visual storytelling was evident during a recent daylong session with Nansemond River High School art students, collaborating with them during a mini-comic workshop.

What’s also clear is her advocacy for using art’s healing power to improve one’s mental health, as she openly discussed how it helps her work through depression, and how it can help others.

Gulledge, a Charlottesville-based artist, author and educator, was at the school Dec. 3 as the Suffolk Art League hosted Virginia Museum of Fine Arts workshops in local high schools — the mini-comic workshop at Nansemond River, a pair of workshops by Blythe King on Altering Images: Photographic Transfers for Painting, Printmaking and Collage at King’s Fork and Lakeland high schools, and a presentation from Sayaka Suzuki on the Visual Pull of the Canvas: Three Layers of Glass to Create a Painting at Nansemond-Suffolk Academy.

Gulledge sketched a mini-comic on art teacher Brian Kershasky’s whiteboard, outlining the creative process to students before she had them sketch one of their own. But she didn’t focus as much on technique as she did trying to will them to not fear being expressive and putting themselves out in the world through their art.

“I want them to be reminded that the creative process is fun,” Gulledge said, “by walking them through it with me. And it’s always helpful to share the creative process and to talk through it with others and having ‘artners’ (a word she uses for partners in art) rather than always working alone, and the importance of staying true to your weirdness and not changing it to fit into the world, but seeing that our art is about changing the world around us, to fit us.”

Sophomore Candyn Sutton, who said she has been creating characters since she was 3 years old, wasn’t using any of her more complex ones — she likes to draw demons and angels fighting among themselves — for her mini-comic. Still, the workshop resonated with her.

“It’s so creative, and I’ve always been into comics,” Sutton said. “I’ve tried to make comics before. I love making characters too and having them interact with each other, too. That’s what I do in my free time also.”

Junior Princeton Toxey worked on creating a recycling superhero for his mini-comic as he took in Gulledge’s workshop.

Gulledge said even the words she uses while out in the world change the reality around her, talking about her books and her “artners” as well what she calls her genius gene and her matter, which is how she personifies her depression. When she does a residency somewhere, she calls them “rest-idencies” because she puts wellness at the heart of them.

Having been an art teacher in Louisa County before striking out on her own, Gulledge said she is comfortable co-creating art with others, as she did with Nansemond River students, but it wasn’t something she did initially.

“When I got back into teaching, it was not co-creating,” Gulledge said. “I was just talking about creation. But I quickly realized that it was way more effective to just do things, to do it together rather than talk about it. But again, I had to be vulnerable, be like, ‘Hey kids, we’re going to write a story together.’

“So it took me awhile to even figure out how to do that because my creative process is different than this, but I love ‘art-nering’ and collaborating because growing up, especially if you do something different than other people, making things together is how I connect with others, so I’m always coming up with ideas of things to do with others, even if it’s not drawing.”

She learned leadership skills in the Girl Scouts, picking up the idea that many introverts were not public, making her want to become better at public speaking and more confident in sharing her work to be the role model that she wished she had growing up.

“I didn’t think that I had anything special to offer, or that my voice mattered,” Gulledge said, “and I think that nobody realizes that their voice matters, and so, that’s another part of it, too, is to give permission. People, especially young creatives, need permission to actually go for it, for someone else to say, ‘Hey, you, your voice matters, and you should practice using it and finding safe ways to share it, because it’s really important (and) it’s not a burden to others to reveal things that maybe we judge about ourselves. You’ll actually open a door for shared vulnerability, but it takes some bravery to put your art out there, to speak up, to make yourself visible, too.”

When it came time for students to create their mini-comic, Gulledge went around to view their work, encouraging them and offering advice, and Kershasky, as much a student in this context, worked on a mini-comic of his own.

He said having another artist in the room teaching lends a different perspective, but yet one with a similar message.

“I think it is pretty much fantastic,” Kershasky said of the workshop. “When the kids have a teacher like me, (they) get used to me and it becomes an everyday thing, but when you see somebody else come in and back you up — already, a lot of the kids say, ‘She says the same things you do’ — I’m like, go figure. She’s an artist too. That’s it.

“You get this wonderful idea that, OK, artists, we all progress differently but we all have these things that we progress the same. Seeing that from one person to another is great. Seeing how one person works versus another person is great. Understanding that each artist — even though we’re all artists — we each have a different kind of voice and our personalities come through the artwork. And so we all do some things the same way, and then we all do some things a different way, and just being able to see that art is like that.”

Gulledge quickly adapted her art to the coronavirus pandemic. Her book, “Dark Matter of Mona Starr,” was one she felt could meet the moment — her publisher was ready to promote it and she had lined up an 11-week book tour in spring 2020, but the pandemic shifted her focus virtually. While describing herself as sad and grief-stricken, she put her energy into action.

She described herself to students as a fraud, initially, when her first book, “Page by Paige” came out. Kershasky said that’s a relatable message for his class, and it will influence their growth.

“A lot of students feel like, ‘I’m not a real artist because I’ve never done anything. And I’m like, ‘Well, you haven’t done anything because you haven’t started yet. You have to do something before you feel like a legitimate artist.”

But Gulledge wants them to understand that they are legitimate artists who can use mini-comics, or comics in general, to draw their emotions as a way to understand them.

“It’s truly the island of misfit toys in the arts,” Gulledge said. “And it’s because there’s not a lot of money there, and so it brings storytellers who really care about story and they’re not looking for fame and glory and money because it’s time-consuming. So it means that people really have to want to be devoted to this work, and also, you don’t take yourself so seriously. So it’s like a humble community of weirdos, very blue-collar, working-class creatives.”