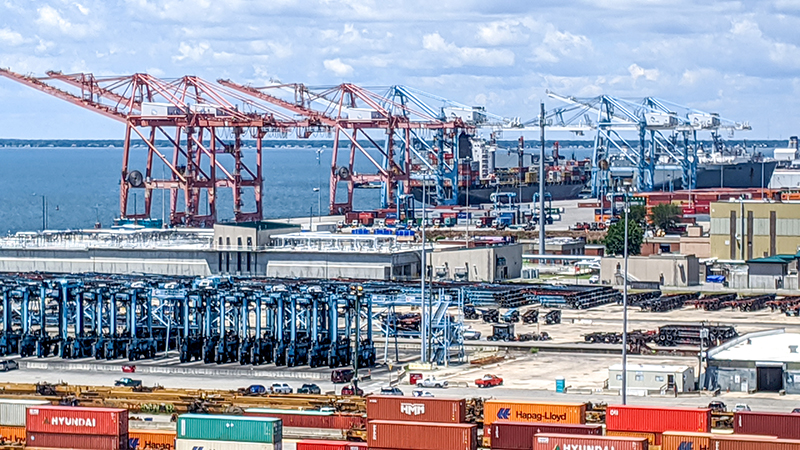 The Port of Virginia. (File Photo)

The Port of Virginia had another record month, processing more cargo volume in November than in any previous November in its history.

The port processed nearly 291,000 twenty-foot-equivalent units, or TEUs, as cargo was up by 10,891 TEUs, or nearly 4% when compared November 2020, which had been the best November on record.

In October, the port had set its all-time single-month volume record, handling more than 318,000 TEUs.

As the port continues to take in record cargo volumes, the port has continued with expanding its rail capacity and deepening its channels, with the Virginia Port Authority Board of Commissioners approving an $80 million expansion for the Central Rail Yard at Norfolk International Terminals.

“We had a productive November in terms of volume, but equally important is that we now have a clear path forward on expanding our rail capacity at NIT, and that effort will be underway shortly,” said Stephen Edwards, CEO and executive director of the Virginia Port Authority, in a statement. “The completion of the railyard expansion is timed to support the opening of the new deeper, wider channel, and both of those projects will be in place and ready (to) support the expansion of NIT’s North Berth.”

In another two years, Edwards said the port will have the deepest and widest ship channel anywhere on the East Coast.

“Pairing that channel depth with modern terminals and a significant increase in double-stack, on-dock rail capacity is going to attract big ships and more cargo volume,” Edwards said. “We are going to need the rail capacity to support the additional cargo we’ll be getting from this shift of big vessels to Virginia.”

NIT’s Central Rail Yard will be able to handle 610,000 container lifts yearly. Work on it will begin in February and is scheduled to be finished in late 2023. The port says the work to widen the channel and deepen it to 55 feet should be finished by late 2024. The current lift capacity is 350,000 at NIT and 480,000 at Virginia International Gateway.

“Interest in The Port of Virginia is very high right now because we are not experiencing any congestion and we are able to accommodate those vessels that are off-schedule,” Edwards said. “Operationally, our performance remains best-in-class, so we are delivering service and real value to all of our customers — the owners of goods in containers and breakbulk cargo owners.”

Citing growth at the port, Sen. Tim Kaine, along with Sen. Mark Warner and seven of the state’s representatives in Congress, called on U.S. Department of Transportation Secretary Pete Buttigieg to visit the port.

The letter cites past infrastructure investments that have allowed the port to be fluid during the country’s supply chain challenges and says its best practices would be useful for Buttigieg to observe and could be applied to other ports. It also notes its record volumes over the past 14 months, making it the fastest-growing port on the East Coast.

“We believe that there are best practices and lessons learned that can be applied to other ports as the Administration works to address supply chain challenges,” the letter states, “and we would be pleased to facilitate a tour of operations at the Port of Virginia. We hope that you will accept our invitation to tour the Port of Virginia to see how its efficient long-term investment model can be applied in other parts of the country as we implement the Infrastructure Investment and Jobs Act, work toward offshore wind and clean energy goals, and achieve long-term solutions to address our supply chain challenges.”

In October, Gov. Ralph Northam and Siemens Gamesa announced that it would invest $200 million to manufacture blades at the 287-acre Portsmouth Marine Terminal. Those blades will be part of the SG 14-222 DD prototype turbines that will go toward Dominion Energy’s 180 wind turbines to be put in 27 to 42 miles off the Virginia Beach coast.

Siemens is leasing two different areas at the terminal, which make up 89 acres, at more than $20 million, to manufacture its blades — the 44.81-acre Area 1 of the plant’s premises at $3,500 an acre per month, and the 44.19-acre Area 2 to serve as a storage area at $3,000 an acre per month. The board approved the lease agreement at its November meeting.