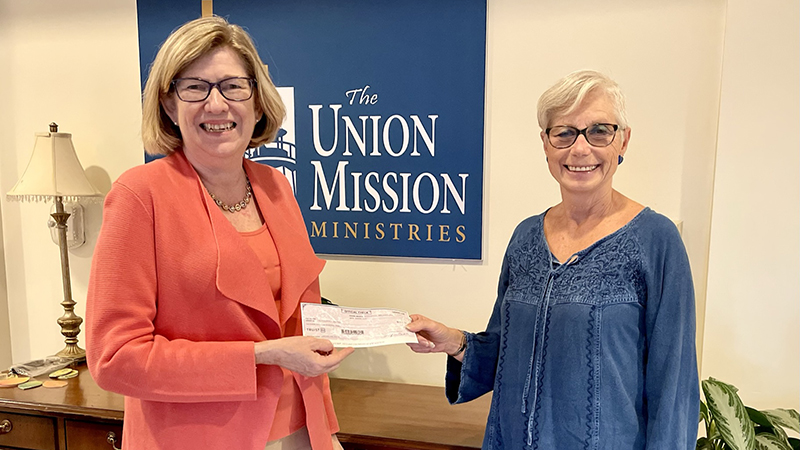 Helen Sommer from The Union Mission receives a donation from Anita Fisher on behalf of the Lakeland High School American Sign Language Club.

A local high school club learned that it is better to give than to receive during the holiday season.

The American Sign Language Club at Lakeland High School raised $483.90 in its loose change drive to donate to The Union Mission Ministries.

This is the third year that the club has headed this drive. Despite the drive being a loose change drive, the students from the American Sign Language Club were amazed at how much their fellow classmates were willing to give to those in need.

The Union Mission Ministries, located in Norfolk, is the region’s largest homeless shelter and serves men, women and children. Its programs include an emergency shelter, training, a children’s camp and counseling.

“We’re always thrilled, especially with a group of young people giving to those who don’t have what they have,” said Helen Hayes Sommer, director of development at The Union Mission. “It’s always exciting to see that.”

According to teacher and club leader Anita Fisher, she enjoyed watching the students count the money they collected over the two weeks.

“I loved hearing how excited they were about how much their classmates gave,” said Fisher. “We are absolutely doing this again next year.”

Fisher donated the final amount in early November for the Thanksgiving and Christmas holiday meals served to those at the shelter. The Union Mission advertises that folks can sponsor a meal for only $2.58. With the students’ donations, they will be able to serve 187 meals to the homeless in Hampton Roads.

“I really like that people donated,” said Christina Butler, a senior at Lakeland High School. “Contributing is like a gift for everybody, and that’s a lot of people this gift will affect.”