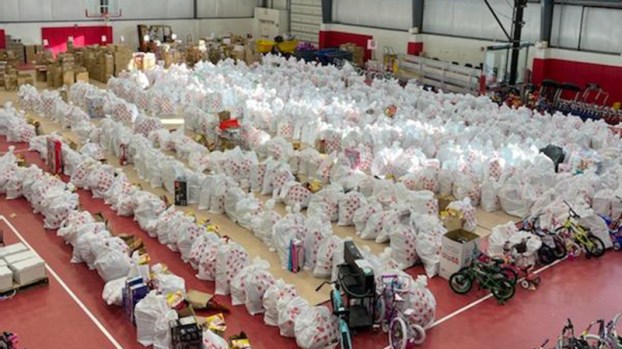 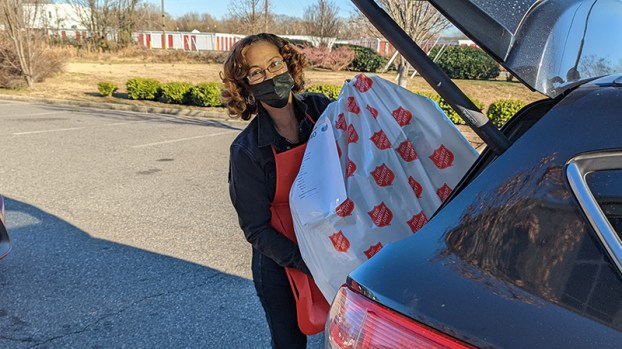 Wanda Olden puts one of the nearly 700 family bags of toys and clothes into a vehicle as part of the Suffolk Corps of the Salvation Army’s annual toy distribution. Olden, with the Virginia Department of Transportation, was there along with co-workers Richard Howell and Norris Jones.

The nearly 700 family bags of toys and clothes destined for about 2,600 children filled the Suffolk Corps of the Salvation Army’s Bank Street gymnasium, and more than 200 bicycles framed them.

Supply chain issues, coupled with a greater need, kept Capt. Angel Simmons busy as she planned for this year’s giveaway, but with the help of more than 170 volunteers, partners and other groups, including the Suffolk News-Herald’s Cheer Fund, Simmons was able to fill the wish lists, even with hundreds of additional children to help this year.

At least 50 churches and 30 businesses, along with numerous civic organizations including Toys for Tots, different Rotary and Kiwanis clubs, women’s groups and sororities made donations, according to Simmons. Everyone the Salvation Army asked to help, she said, did something.

“We had way more companies adopt families,” Simmons said. “There was a lady who came in and she had just lost her apartment, everything in her house was destroyed. So someone came in and bought her a Christmas tree and bought beds for her children. The company bought gift cards so the kids could get clothes. There’s just been so many blessings through people being more generous because everyone has seen what it means to struggle in the last two years.”

And Simmons and the many volunteers were packing the bags and bicycles into cars over the course of three days this past week as they drove through the parking lot.

Wanda Olden, a Virginia Department of Transportation employee volunteering Dec. 14 along with co-workers Richard Howell and Norris Jones, said the agency allows them 16 paid hours of community service. Helping the Salvation Army was meaningful for the trio, who had been there since 8:30 a.m.

“We’ve seen the people and how grateful they are,” Olden said, “and the hard work that was put in to getting this all together. It’s fantastic. It really is.”

And like last year, they packed everything into large bags, which has provided each child with more toys than in previous, pre-COVID-19 years.

“Even last year, people were saying, ‘Well, we got way more than what we usually get,’” Simmons said, “because when we’re packing a bag, you pack a whole bag for each child, and it’s a lot more stuff than the three items they might have gotten through the toy shop.”

It took more than a month for volunteers and Salvation Army staff to assemble them.

Through the Suffolk News-Herald Cheer Fund, Toys for Tots and the Joy Fund, the Salvation Army was able to buy the toys and other things they needed. Some children were adopted through the Angel Tree. With extra money from the Cheer Fund, which collects roughly $40,000 yearly, the Salvation Army was able to buy extra toys and purchased $10,000 worth of bicycles, in addition to scooters and even hoverboards.

“I called different places because I had already been told that it was going to be hard to buy toys and there were shipments that were out on the water,” Simmons said. “So I started calling places then and saying, ‘I need to order this amount worth of toys and went to different toy shows and picked out toys, and so they were all here before the end of November, thankfully.”

Simmons said they also shopped at stores in the community, including Walmart, and a retired police officer put together more than 130 of the bicycles.

“All of the stuff that we needed done,” Simmons said, “God just provided the right people at the right time. We planned ahead and it worked out.”

In addition to the giveaway that took place over three days, and then another day for those who signed up at the last minute, they also took gifts to a local senior center and are beginning a mobile food pantry Dec. 20 to help people with Christmas meals.

The Salvation Army also plans to open a satellite office every Friday beginning Jan. 7 at the offices of the Department of Social Services at 306 N. Main St. in Franklin to help people who live further away from its downtown Suffolk location. It is also working with other partners in Franklin to sign up more children for its programming and provide more feedings in its service area.

Simmons outlined plans for next year to expand programming to open up the gym and gradually increase the number of days per week it hosts afterschool programs for children, aiming to have it be a five-day-per-week program by March. It also received a grant to buy keyboards so it can teach piano.

“Our goal,” Simmons said, “is to be able to be a fully-functioning community center in 2022.”

But as she said that, more families were pulling up to pick up much-needed toys and other items as the Salvation Army, and Simmons bounded outside to help people receive what they needed.

“The joy of it is that there are some families that are really, really struggling, especially after COVID,” Simmons said. “And so we wanted to be able to give a little more this year and last year so that, there may be some struggles, but on Christmas morning, the kids are like, ‘Wow.”

The Suffolk News-Herald Cheer Fund was started by the newspaper during the Great Depression to provide clothes and food for needy families. It eventually began providing toys for children and teamed up with the Toys for Tots and the Salvation Army.

These days, this program of the newspaper is its own nonprofit, with an independent board, and each year collects roughly $40,000 from individuals, groups and foundations in the community. This money goes directly to the purchase of toys.

Donations can be made in honor or in memory of anyone you like, and that notation will be listed in the newspaper along with your gift. You can also give anonymously if you like.

If you bring the check to our office, we’ll even take your picture as you hand it to one of our staff.