Putting a tradition in reverse 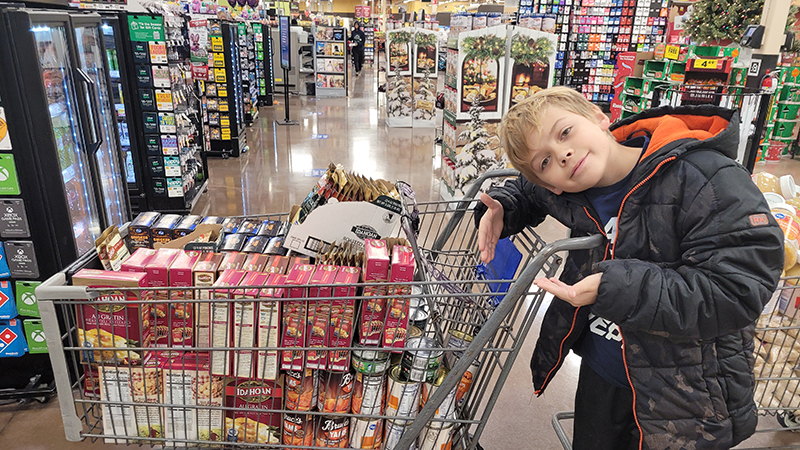 Brody Mitchell-Galambous made 50 boxes of nonperishables for Mercy Drops Dream Center in Portsmouth.

Brody is 9 years old and has collected nonperishable foods for those in need since he was 5 years old. It started when his mother, Cheyanne Gorkowski, found a post on Facebook about a reverse advent calendar. The idea is to donate a canned good every day leading up to Christmas instead of receiving a piece of chocolate.

“He said, ‘How selfish of me to eat chocolate when people don’t have food,’” said Gorkowski. “So, we planned to do five boxes because he was 5 years old.”

Instead of sticking to his age like the original plan, the number of boxes grew from six the first year, to eight the next and 16 last year. Wanting to help even more people this year, the goal was 50. To reach this high goal, Gorkowski went on her Facebook and asked friends and family to help out their cause in October.

“The community really rallied around this kid, and he got it done,” said Gorkowski.

Gorkowski and Brody moved to Suffolk in 2021, but this year they continued to partner with the Mercy Drops Dream Center in Portsmouth as they had in the past. They helped the nonprofit deliver the boxes at an apartment complex in Portsmouth of senior citizens with fixed incomes. They hope to next year be able to keep the donations in Suffolk and find a new local partner to work with moving forward.

“It feels great to be able to give back to the community, especially those who wouldn’t be able to eat,” said Brody. “Next year we are going to do 100 boxes.”

Folks donated food and money for Brody to put together his boxes. Each box is full of nonperishables, including peanut butter, canned vegetables, boxed mac and cheese, rice, cereal and beans. All of the items totaled around $2,000.

Support even came while they were shopping for the food, as a manager and employee asked them about their four full shopping carts. Then, after hearing why, they donated $45 to help out.

“God put it on people’s hearts to donate, and we are very thankful,” said Gorkowski.