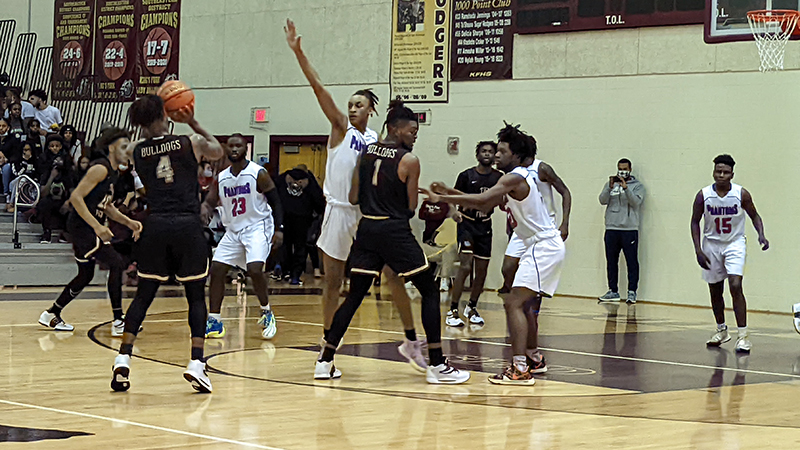 The King’s Fork boys and girls basketball teams are playing with a purpose and intensity that comes with trying to make up for lost time, or in their cases, lost seasons.

With the COVID-19 pandemic in full bloom last winter, their 2020-2021 seasons were called off, unlike the fall season in which teams from the city’s public schools were able to compete against one another, and the spring teams who got to play a full schedule.

Both expected to be Class 4 state title contenders last season — when they last played in the 2019-2020 season, the boys won a share of the title when COVID-19 cut the season short just prior to the championship game, while the girls had lost to Grafton in the Class 4 Region A semifinals.

Though they understood why they were sidelined, it didn’t make it easier.

But their resolve to persevere was evident Dec. 18 in the King’s Fork Winter Classic Basketball Tournament, in which some of Virginia’s best high school teams came to the Kennel at King’s Fork.

Smithfield’s girls are one of those, and it has a pair of transfers, Division I commits Kyla Abraham and Jayla Hearp, leading the way. But the Bulldogs smothered the Packers from the outset, starting the game by scoring the first 16 points on their way to an 81-48 blowout win. King’s Fork used a trapping defense to generate turnovers and easy baskets throughout.

And while Hearp, an East Carolina-commit who led Hampton to a Class 4 state championship in 2020, scored 28 points, the 6-foot-5 Abraham, who has committed to perennial power Baylor and transferred to Smithfield from Choctawhatchee High in Fort Walton Beach, Florida, scored just four.

“We knew they had two Division I commits, so we knew it would be a tough task just trying to defend both of them,” said King’s Fork girls basketball coach Maurice Fofana.

King’s Fork (4-1) had three players score in double figures, led by Niyah Gaston’s 23 points, Cyriah Griffin’s 19 and Arlisha Boston’s 15, even as Boston spent much of the game guarding Abraham. Many of their points came off a suffocating defensive effort, pressuring the Packers into turnovers that led to easy baskets. Yasmine Brown, another key player for the Bulldogs, scored seven points.

“We’re a fast-playing team, and it forced them to exert so much energy trying to dig out of that hole,” Fofana said. “But I think we got a little complacent and we allowed them to claw back, claw back, but I’m OK with the way we played.”

The Bulldogs’ boys, meanwhile, cruised to a 71-36 win over Church Hill Academy of Richmond, leading the game for most of the 40 minutes.

King’s Fork (4-0) started strong, with George Beale feeding Ryan Hite for a dunk, and after a Church Hill Academy 3-pointer, regained the lead and stretched it to 13 points by the end of the first quarter and 25 points by halftime.

Beale and Sam Brannen led the Bulldogs with 19 points apiece, while Adarius Boston added 10 points and Elijah Walker had 8.

“The biggest thing we wanted to do was protect home court,” said Bulldogs boys coach Rick Hite. “That was the biggest thing. Then with some good games already ahead, we wanted to try to get off to a good start. I thought we did that. We played with good energy for most of the game and then we finished the game the right way, but I’m proud of my guys.”

The two games involving King’s Fork’s boys and girls teams capped off a full day of basketball, as Hampton’s girls started the day with a 79-49 win over Grafton, followed by Granby’s boys picking up a 53-48 win over Grafton, and then Class 5 state title contenders L.C. Bird topping Class 4 contenders Landstown 76-73 on a buzzer-beating 3-pointer.

But if the Bulldogs’ boys and girls teams play the way they did in their tournament games, they’ll have a good chance of carving a successful path through the season.

Anyone facing King’s Fork’s girls will have to deal with their pressure, something that proved difficult for a Smithfield team with two Division I committed players.

And Fofana has players who not only play strong defense, but also can take advantage of the turnovers they create, in particular Gaston, who made four 3-pointers.

“We shoot the ball well,” Fofana said. “We have some kids that can score the ball at any spot on the floor. If she’s at halfcourt, she has the green light to shoot, so no shot is bad for her. Hey, I just like it when she’s making more than she’s missing.”

And he has no issue with any of his players taking shots as long as they’re playing defense.

“We have a good team that can really score the ball,” Fofana said, “so no lead is too big, or we’re never in a hole too much that we can’t get out of it.”

After not getting to play last season, Fofana preaches being as safe as possible — masking, washing hands. And he said a tough schedule will have them primed and ready to challenge anyone.

“We’re just excited that we can play,” Fofana said. “We worked all the way up last year to about our first game before they shut us down, and it was just disappointing for us, so now the kids are just so happy to be out playing basketball, so we’re just trying to stay as safe as possible and do everything that we can to control what we can control.”

King’s Fork boys coach Rick Hite said they’re ready for what is ahead, with a tough schedule of their own to navigate their way through the season.

While it doesn’t have standout Jayden Epps, who transferred to Combine Academy in North Carolina, it has more than enough talent to contend for an outright state championship. Beale, he said, is one of the best scorers in the state, and Brannen and Ryan Hite can also score when needed. He also pointed to Kaleb Brown and Daron Jackson, who is averaging a double-double with points and rebounds.

Rick Hite said the Bulldogs will “get after it” defensively and play a high-tempo style, but said his team is flexible enough to adapt styles of play if needed.

“We expect to be there at the end,” Rick Hite said. “I like the group. The group has great chemistry. We have a lot of guys that were a part of that team two years ago (and) we did a lot of things even without having a season, we did a lot of things to try to stay connected as a group. We’ve got a lot of guys that can put the ball in the basket, and we have some toughness, so I think we’ll keep getting better as the season goes along.”

Beyond that, he hopes the team can stay healthy and just keep playing, unlike last year when they couldn’t.

“Last year was a tough situation,” Hite said. “We were obviously disappointed, but it was out of our control. So this year we’re going to try to control the things that we can control, making sure we stay healthy, taking care of the proper protocol steps and take one game at a time.

“We’re fortunate and blessed to even have a chance to play, so we don’t take that for granted at all.”