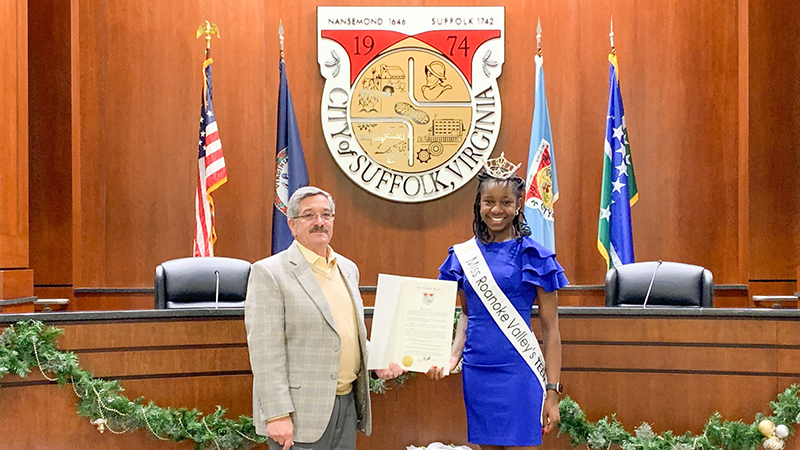 Ayana Johnson went to City Hall for Mayor Mike Duman to give her a proclamation officially stating that Suffolk acknowledged Sickle Cell Awareness Month during the month of September.

Being born with the disease, Ayana has done a lot of work promoting awareness and research on Sickle Cell Disease, despite being only 15 years old. This proclamation came after Ayana spent time emailing, calling and making connections. But, according to her, the biggest part was staying consistent.

“I was very honored to receive that,” Ayana said about the proclamation.  “I’m proud of how far I’ve come and am happy to continue the work.”

Ayana started her advocacy at only 10 years old. However, she knew it was something she wanted to do, especially because her disease does not receive as much attention as others. Being an advocate helped her gain the position of Sickle Cell Disease Association of America Inc.’s 2021-23 Teen Ambassador.

She also recently won Miss Roanoke Valley’s Outstanding Teen as she is on her way to compete for Miss Virginia’s Outstanding Teen part of the Miss America program in June. She also uses this platform to inform folks about the disease as well.

“I never thought I’d be as busy as I have with these projects,” she said. “I have other exciting things coming up soon, so I’m not going anywhere yet.”

Ayana has simple advice for other young people who want to make a difference in their community.

“I’d definitely tell youth who want to be activists to go for it,” she said. “It may be scary, uncomfortable, you don’t know if people will listen, but you don’t know how far something will go until you try. No one is holding you back but yourself.”